One year of monitoring investments, tracking earnings, filling out tax forms ... and you get nothing.

How rare is this?

The optimistic answer is, not rare at all.

The depressing answer is that the market neither know nor care about your goals, and often require years of patience to see any results.

Stocks have been lower than they were 12 months prior in about a third of all months during the last 130 years. So, we're in good company.

How long might this stall last? That's a question no one can answer. But here's a look at history's extreme cases. 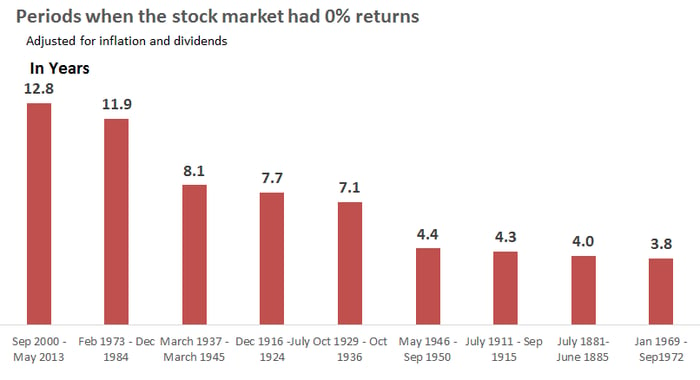 There are about a dozen separate episodes over the last 130 years when the market sat lower than it was three years prior.

The 13 years ending in May 2013 was the longest such stretch. If you survived this period with your head on straight, congratulations — it was, statistically, the most frustrating period in market history. Even during the Great Depression, when the market was down almost 90% at one point, we saw new highs after about seven years (adjusted for dividends and inflation).

And that's just periods of 0% returns. No one gets excited about running in place. How long did it take from these starting points before you earned a decent annual return? Quite a bit longer: 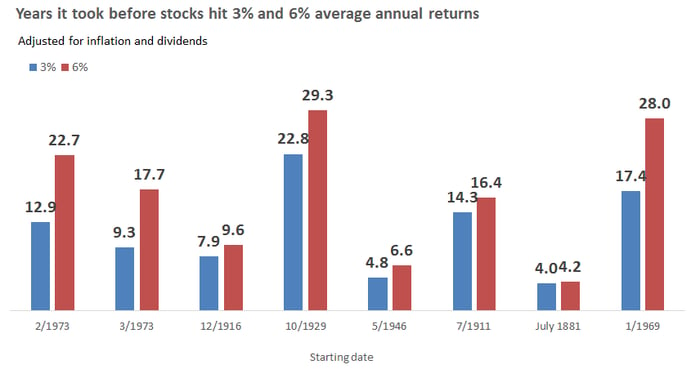 If you invested in stocks in October 1929, it took nearly 30 years before your portfolio achieved a 6% average annual return from your starting price.

That's not a forecast of what we may be facing today. October 1929 was a bubble like the world had never seen, and the Great Depression and World War II dealt as crushing an economic blow as anyone could envision. But a few years ago I interviewed Robert Shiller, a Yale economist who won the Nobel Prize in economics. I asked him about events like the Great Depression, and how unlikely they are to happen again. "Well, it happened once before, so of course it could happen again," he said. A real hoot at parties.

His point was that long, drawn-out market swings are caused by shifts in investor confidence, like a big pendulum with optimism on one side and pessimism on the other. There are two important things about this pendulum. One, it's caused by instinctual behavior that will be with us forever. It's not the kind of thing people learn their lesson from and prevent in the future. Two, the pendulum is longer than people assume. Periods of disappointment can last for decades.

But there are two smart ways to handle the prospect of a returns drought.

One is to be opportunistic. We're not market-timers, and don't believe anyone can forecast when the market is about to turn. But we believe in value, and the more stocks decline, the more value they, as a group, offer.

The only sensible way to be opportunistic as an investor is to hold a chunk of cash to deploy as the market drops. As you deploy cash when the market falls, your cost basis may decline, shortening the amount of time it takes to get back to even. This is why it took only seven years to reach new highs after the Great Depression: Stocks fell so much that the dividend yield rose to a staggering 13%, which, when reinvested, is like pouring gasoline onto the fire of compound interest.

The other strategy is more philosophical. It's being patient.

"Be patient" is the best investing advice that no one wants to hear. It's the equivalent of a doctor telling you to eat your veggies and go for a run. Knowing that it's right doesn't make it any easier to accept.

But investing is an exercise in delayed gratification, and the greater the delay, the greater the gratification. Long stretches with no returns — the 1930s, the 1970s, and the 2000s — ended at what became the beginning of the most powerful bull markets in history. That's no coincidence. Investing has a high correlation between pain today and payoff tomorrow, and the greatest consolation when enduring a period of no returns is realizing that with each passing day, the odds of future success stack a little higher in your favor.