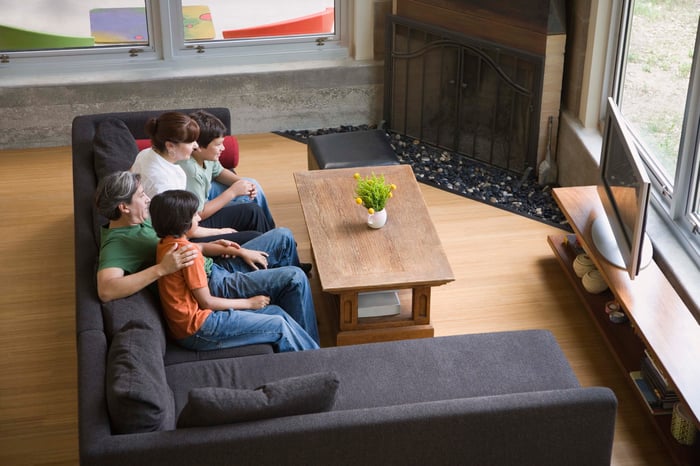 Investing is more fun when you're buying companies that are easy to follow. If you're in your 40s and have preteen or teenage children, chances are you'll know something about each of the three businesses I'm about to introduce to you.

All of them sell popular products and are well known in their respective industries. They also produce roughly $23 billion in combined annual cash flow from operations.

Even as ESPN struggles to keep viewers tuned in, online crowds are flocking to streamed "Esports" events. Think of them as you would any other pro sport. Only here, the contestants vie for victory using little more than a controller, a console, and a headset.

It's big business. According to digital game industry-tracker Newzoo, the "Esports Economy" is on track to grow from $325 million last year to $463 million by the end of 2016, a 43% year-over-year jump. Worldwide, the company sees e-athletes drawing "131 million 'Esports Enthusiasts' and another 125 million Occasional Viewers who tune in mainly for the big international events." That's a huge potential audience, and Activision Blizzard is positioning itself to serve them all.

At the heart of the strategy is Major League Gaming, a troubled would-be ESPN for Esports that Activision Blizzard acquired in January and relaunched in May. If it pays off, the company could generate billions in new operating profit -- altering its fortunes, and making a mint for today's investors. (Activision Blizzard produced just $1.28 billion in operating income over the trailing 12 months ended in March.)

Disney: A License to Print Money

For as much groaning as there has been over Disney's weakening cable division, there's no disputing the power of its brands; nor does the company lack growth. Revenue is up 8.1% over the trailing 12 months, S&P Capital IQ reports. Earnings from continuing operations and cash from operations were up 12.3% and 10%, respectively, over the same period.

Big gains in Studio Entertainment and Parks and Resorts have more than compensated for shortfalls in the Cable Networks division that includes ESPN and related channel operators. Look at 2015. According to S&P Capital IQ, Disney generated just over $5 billion in operating income from films and park visitors last year, or 34.1% of its total. That's up from 32.4% in 2014, and a lot of the gain is coming at the box office.

Disney piled up nearly $2.3 billion in ticket sales at U.S. theaters last year, and is shaping up to at least equal that in 2016. According to Box Office Mojo, the House of Mouse has grossed $1.789 billion domestically with only half the year over. With so many big brands appealing to audiences -- from Marvel to Star Wars to a range of animated epics -- it's a reasonable bet that Disney will be a top-three box-office performer for years to come.

Roughly 22.5% of the world's population -- 1.65 billion users -- logs into Facebook monthly. That's an extraordinary number of people, and an outstanding achievement for a tech platform. No single channel app or station has ever achieved such scale, not even the BBC, which reaches 348 million people weekly.

Think about that for a moment. Facebook has created a network that makes it possible to connect to virtually anyone, in any country, irrespective of borders or legal infrastructure, with a few clicks. And not just on the core platform, but also via add-ons such as the WhatsApp messaging service, which reaches 1 billion monthly active users, and Instagram, which serves 500 million monthly active users.

Displacing or disrupting all that infrastructure would unleash chaos around the globe. And yet Facebook is just the sixth-largest company trading on U.S. exchanges. A run for the top of that list seems likely, though it could take 10, or even 20, years to get to that point.

A Choice for the Decades

Whether you buy all or none of these stocks -- or some variety in between -- should depend on what you know, and what interests you as an investor. Are you using Instagram and WhatsApp to keep track of your kids, and Facebook to stay in touch with distant cousins? Buying shares of the social network might make sense for you.

If a Friday night game of Call of Duty with friends is more your thing, then Activision Blizzard might have a place in your portfolio. And if you're as much a comic-book fan and sci-fi nerd as I am, well, buying a stake in Disney and its growing slate of Marvel and Star Wars properties might be most appealing.

Whichever stocks you choose to invest in, make sure that you'd be willing to follow and hold them for at least three years, and ideally much longer than that. Buying at 40 and selling at 43 isn't investing; it's speculating.