A look at the trends in the food company's earnings and outlook.

Spices and seasonings company McCormick & Company, Incorporated (MKC -5.80%) is benefiting from strong end market trends in its core U.S. consumer business, while continuing to generate good -- acquisition-fueled -- growth in Europe. The second-quarter earnings report released June 30 was broadly positive, but as ever with McCormick, there are a lot of moving parts within the numbers and you need to look carefully. Let's do that. 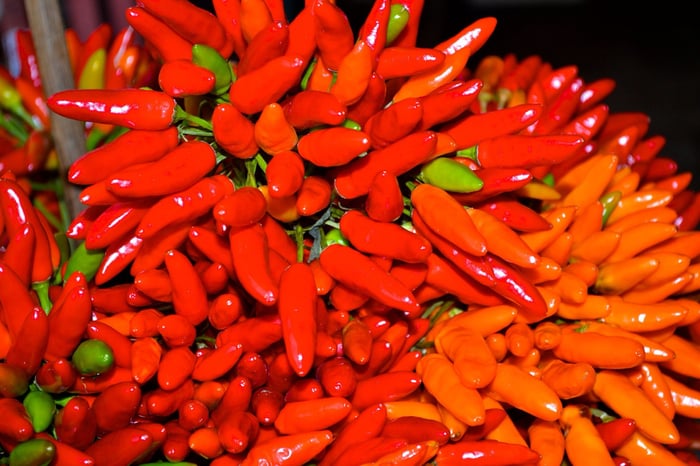 As you can see below, constant-currency growth was a lot stronger than reported growth, indicating that if/when the U.S. dollar stops appreciating, the underlying strength in McCormick's sales growth will shine through.

Turning to acquisition impacts. In the key consumer segment, acquisitions contributed 5.7% of the 8.3% constant-currency sales growth -- a significant impact.

In short, adverse currency movements are holding back profit growth and acquisition-fueled growth is helping generate overall sales growth -- see what I mean about McCormick's results never being easy to quickly deciphered?

In fact, the positive impact from acquisitions and special charges also needs to be taken into account when looking at management's commentary on guidance. The headline numbers in McCormick's full-year guidance were left unchanged:

However, management expressed a "greater confidence in achieving the higher end" of the sales and adjusted EPS. Time to get excited?

Not really. Part of the reason for increased confidence is due to the acquisition of Gourmet Garden in April. Moreover, management actually reduced its guidance for reported full-year EPS from a range of $3.65-$3.72 to $3.63-$3.70 on account of an increase in the estimated impact of special charges by $0.02 to $0.05.

That said, it would be churlish not to acknowledge that McCormick is on track for 2016. Its underlying guidance remains the same -- excluding the impact of special charges adjusted EPS is still expected to be $3.68-$3.75.

Focusing on the U.S. consumer

In addition, McCormick's Americas consumer sales, up 6.4% on a constant-currency basis in the quarter, are increasingly being driven by strong category sales in the U.S. The company is benefiting from favorable end markets in the U.S. Still, there are questions to be answered as to why its U.S. consumer sales are lagging category growth, and what management can do about it?

In response to a number of analysts' questions on these issues, CEO Lawrence Kurzius made the following arguments:

... our unit share growth has been stronger than the category, where our dollar share growth is tracking slightly behind the category. That's really reflecting that shifting in the retail price points.

It's also a reflection of McCormick's recommendations to retailers to change "price points for their private label, for economy brands and for other brands in the category." It appears that management is happy to give up a little pricing in order to gain product share growth with the U.S. consumer.

The question is whether it will lead to dollar share growth in the future? Kurzius thinks so, saying "we keep saying that we are going to get there and I believe that this is evidence that that's true."

Rest of consumer and industrial segment

McCormick continues to generate strong sales growth in Europe with EMEA (Europe, Middle East, and Africa) constant-currency sales up 19.5%, with acquisitions contributing 72% of the increase.

Asia/Pacific consumer sales were up a paltry 0.5% on a constant-currency basis, but there are mitigating factors. China sales were affected by "the timing of customer purchases related to promotions and the successful implementation of SAP in our Wuhan facility," according to CFO Gordon Stetz. Moreover, India sales declined due to discontinuation of lower-margin products. Going forward, Asia/Pacific consumer sales could improve.

Turning to the industrial segment, McCormick put in a solid performance, with constant-currency sales growth of 2.2% in the Americas, 0.5% in EMEA, and an impressive 9.3% in Asia/Pacific. The latter was boosted by strong sales to quick-service restaurants in China, but Kurzius served notice that a large customer intended to add another supplier for some items that McCormick currently supplies -- sales pressure is expected in the second half.

All told, it was a solid report. Going forward investors will be looking to see if McCormick's U.S. consumer sales can start to increase more than the marketplace, while hoping for a pick-up in growth in Asia/Pacific consumer sales and keeping a watchful eye on the impact of a China customer's action on its industrial sales.

Lee Samaha has no position in any stocks mentioned. The Motley Fool recommends McCormick. We Fools may not all hold the same opinions, but we all believe that considering a diverse range of insights makes us better investors. The Motley Fool has a disclosure policy.

Is McCormick an Excellent Dividend Stock to Buy Now?

Where Will McCormick Stock Be in 3 Years?

Is McCormick Stock a Buy?

Is a Raise Enough to Make This Dividend Stock a Buy?
397%