Why Netflix and Micron Technology shares made big moves on a flat day for stock indexes.

Stocks ticked up on Friday to close out their best week of the year. The Dow Jones Industrial Average (^DJI -1.40%) gained 19 points, or 0.3%, and the S&P 500 (^GSPC -1.79%) added 4 points, or 0.2%. Heading into the holiday weekend, both indexes are within a percentage point of where they stood before the Brexit vote sent volatility soaring. 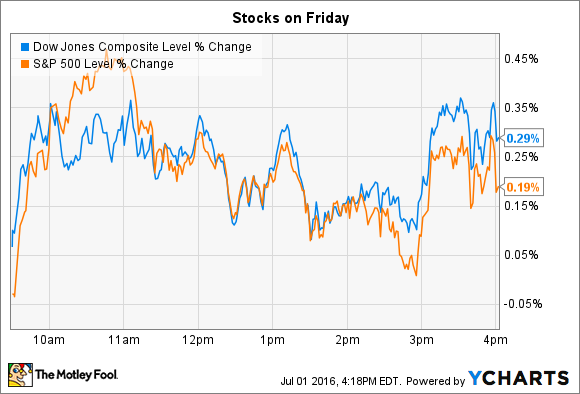 Netflix shares rose 6% to push the streaming video titan back in positive territory over the past year. However, the stock remains down about 20% so far in 2016.

At least one Wall Street pro thinks that dip has produced a prime buying opportunity. Michael Graham, an analyst at Canaccord, dubbed shares a "buy" on Friday and predicted the stock could soon be worth $120 (or 32% above Thursday's closing price). Investors are worrying too much about "temporary headwinds" that will likely keep growth down over the next few quarters, but should give way to a stellar few years of international expansion for Netflix, Graham said .

The company is clearly in a slowdown at the moment. CEO Reed Hastings and his executive team forecast adding 500,000 subscribers in the U.S. market in Q2 and only 2 million outside of the U.S., for a total member increase that's 24% lower than the prior year's. It's also true that those numbers are being held back by short-term issues, namely a price hike on the U.S. subscriber base and an unusually strong year-ago period that included blockbuster launches in Australia and New Zealand .

In that light, it's hard to argue with the idea that Netflix's future growth -- as it penetrates, say, the massive Japanese, Brazilian, and Indian markets over the next decade, will be much stronger than the next few quarters might suggest.

Semiconductor chip specialist Micron Technology fell 9% following a quarterly earnings report that pointed to worsening operating trends ahead. Sales fell 25% and profitability dove by 3 percentage points to 17% of sales. These negative trends translated into a $200 million net loss, compared to a $97 million loss in the prior year. Micron has now slipped into the red for fiscal 2016, which includes the past nine months of operating results.

CEO Mark Durcan highlighted the progress that the company has made in releasing its DRAM and NAND technologies, but said demand just hasn't picked up and pricing pressures aren't helping. "We continue to face challenging market conditions," he said in a press release.

In response to the slump, Micron is conducting layoffs aimed at slicing $300 million out of annual costs beginning in fiscal 2017. While that suggests improving profitability ahead, it's also an admission that the company's growth struggles aren't about to give way to a rebound. The industry is shifting in a direction that doesn't fit Micron's current expense infrastructure. It's no surprise then, that investors sold off shares on Friday as they reset expectations on growth over the coming years.