At this point, it is very widely believed that microprocessor giant Intel (NASDAQ:INTC), which has long struggled to gain a foothold in the market for smartphone-oriented silicon, will supply the modems into Apple's (NASDAQ:AAPL) upcoming iPhones.

Analyst Chris Danely published a very strange note (via Barron's). In the note, he claims that Intel has "won roughly 25% share of the iPhone 7 away from Qualcomm." He further goes on to claim that Intel's average selling prices on these modems will come in $5.00 "at best."

As a result of this very low estimated average selling price, he thinks that Intel will be selling these modems at negative gross margins under the assumption that it costs "at least" $10 to manufacture each chip. In other words, he's claiming that the chipmaker will lose money on each iPhone shipped with Intel inside.

This seems incredibly unlikely. Here's why.

Intel is trying to improve mobile profitability, not tank it

Intel made it clear that it intends to reduce its operating losses related to its mobile group by at least $800 million this year. As part of Intel's efforts to cut those losses, the company has, as Danely notes, begun to cut operating expenses (i.e. the major restructuring that the company announced on the last earnings call).

However, it's important to note that at its investor meeting back in November 2015, CFO Stacy Smith said that the company's mobile loss reduction in 2016 would come from a combination of operating expense reductions and product margin improvements. 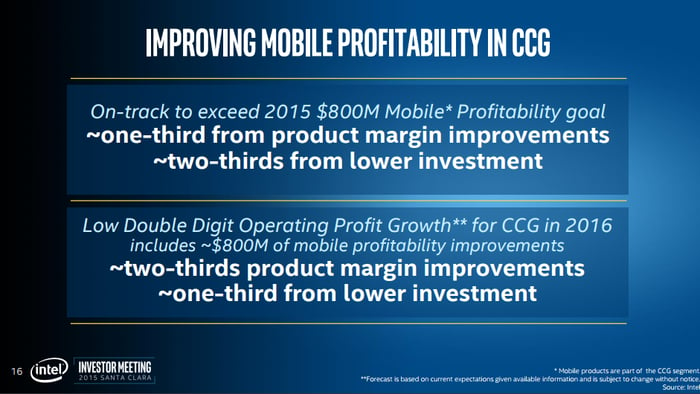 Intel likely knew about its design win at Apple at the time of the investor meeting since such design cycles are fairly long. Intel was also likely aware of the cost structure of the modems it would sell to Apple and, of course, what prices it would sell these modems to Apple at.

If Intel were planning on shipping chips wrapped in $5 bills (or more) into a high volume socket such as the Apple iPhone, I think it would have been very hard for the company to hit its stated operating loss reduction goal.

This Fool isn't buying it

At this time, I find it very implausible that Intel will be selling modems to Apple at negative gross margins. Although Intel management has indicated that it wants to ship modems into high volume devices for longer-term strategic reasons, I don't think it is as desperate to win a spot in the iPhone as it was to gain entry into the tablet market, which the company likely feared would cannibalize its core PC processor market over the long-term.

I continue to believe that if Intel is inside of the iPhone, it has won this spot by selling product at positive gross profit margins. Those margins may be razor thin, almost certainly substantially below corporate average, but it just doesn't seem reasonable that they would be negative.