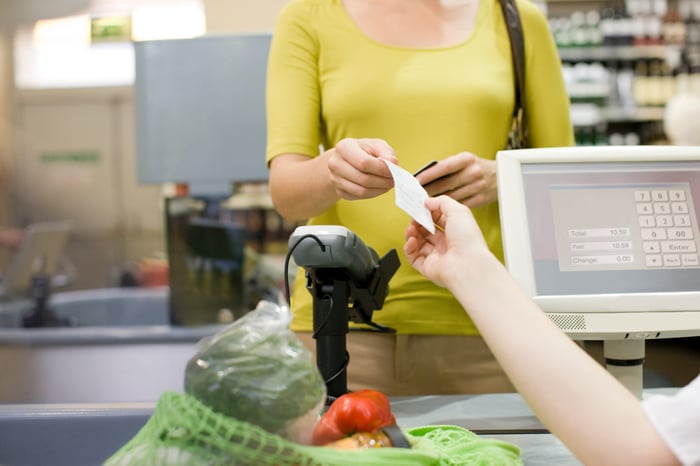 Costco's (NASDAQ:COST) rewards credit card has been in the news for all the wrong reasons.

The warehouse club recently switched its branded card from American Express (NYSE:AXP) to Visa (NYSE:V), and the transition has not been entirely smooth. The changeover was especially abrupt, with the old cards being valid on June 19 then going dead as the new ones become the only accepted Costco rewards card on June 20.

Consumer confusion was also compounded by the fact that the chain stopped taking American Express altogether. That led to some chaos at checkouts -- there were cardholders who did not have their new Visa's and American Express users who's card was no longer accepted.

Ultimately, though, Costco will sort out the confusion, maybe losing a few members and cardholders along the way. The warehouse club's new Visa, the Costco Anywhere card, is an improvement over its old offer.

Costco offers a very good deal -- good enough that its regular customers should take it up. For less loyal shoppers might it make more sense to pick a rewards card at a more traditional store? Target (NYSE:TGT) pushes value as one of its marketing cornerstones, but it's also a full-line chain that isn't limited in sizes and selection like Costco.

This comparison is not meant to sway die-hard customers of either chain. If Costco offers a slightly better rewards card, but you hate shopping in a warehouse, well, stick to Target. The same goes for fans of the membership-required chain who can't imagine buying toothpaste or ketchup in less than a six-month supply.

For those of you on the fence -- the people who would and could shop at either chain -- here's a look at what each company offers.

What does the Costco Anywhere Visa offer?

Costco's new card does not have an annual fee, but holding it requires paying the warehouse club's $55 annual Gold Star membership charge.

Members who then apply for and are approved for the card get 4% back on eligible gas purchases (for the first $7,000 spent in a year; then it drops to 1%). They also receive 3% cash back on purchases made at restaurants and eligible travel, and they earn 2% cash back on anything bought at Costco, as well as 1% back on anything else bought with the card. Cardholders also get worldwide car rental insurance and worldwide travel accident insurance as well as damage and theft protection for some purchases.

Costco does not list a maximum on total rewards that can be earned through its program on the Citigroup web page that details the terms and conditions of the credit card offer. Multiple requests to clarify this on Citigroup's Twitter support page (which is where the card issuer directs consumers looking for more help) were directed to a different web page, which also does not mention any annual rewards limit except capping the gas reward.

What does Target's card give users?

While Costco offers a number of benefits, including 1% cash back on all purchases, Target's REDcard MasterCard (NYSE:MA) benefits are tightly tied to shopping with the retail chain. Cardholders get 5% on pretty much any purchase at Target or Target.com. The discount "applies to eligible purchases minus any other discounts and the value of any promotional Target gift cards received in the transaction," according to the company's website.

There are some exceptions, including eye exams, gift wrapping, and Target.com shipping charges, but the deal applies to the vast majority of what the chain sells.

REDcard holders also get an 30 extra days to return any purchases made on the rewards MasterCard beyond the standard return policy applicable to each item. In addition, cardholders get free standard shipping on Target.com.

Which is a better rewards program?

It depends how much you shop at each store, but Target's card offers some pretty simple math. If a cardholder spends $20,000 a year at the store (which seems like a pretty high number even for a family of four that grocery shops at the chain) he or she will get $1,000 back, assuming all purchases are eligible.

That gives the Costco cardholder $580 back on the same $20,000 the Target customer earned $1,000 back on. The warehouse club does offer better secondary perks, like its various insurance programs, but if you're an avid Target shopper (or could be), its straightforward offer generally comes out to be a better deal than Costco's.