eBay is making a smart move by betting on a this massive growth opportunity. 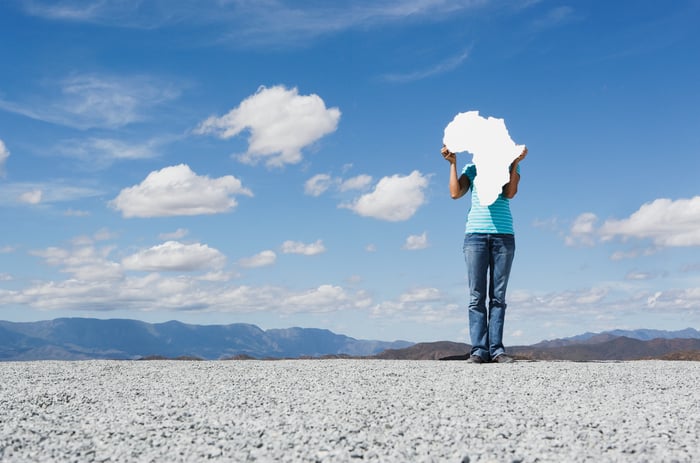 eBay (EBAY 1.79%) has recently announced that it will be expanding into Africa via a partnership with African online shopping start-up MailforAfrica.com. The move will probably have a modest financial impact in the short term; however, eBay is making a smart move by positioning the business to capitalize on promising growth opportunities over the years and decades ahead.

The new partnership between eBay and MailforAfrica.com will allow U.S. sellers with a star rating of 300 or more to sell their products directly to customers in Africa. Inventory from eBay will initially be available in Nigeria, followed by Kenya, and then by Ghana. Expansion into these three countries is scheduled to be completed during 2016.

The arrangement involves the creation of a new platform called eBay Powered by MallforAfrica. Via this platform, buyers in Africa will have access to all kinds of items from eBay sellers, while key aspects, such as payments and logistics, will be handled by MailforAfrica.com.

The main idea is that sellers on eBay will be able to sell their products to customers in Africa with the same simplicity as in the U.S. MailforAfrica.com will accept payments in local currencies, as well as digital payment platforms, and sellers will receive the agreed transaction price in U.S. dollars.

MailforAfrica.com is an online shipping and payments platform created by entrepreneur Chris Folayan in 2011. Foyalan was studying and working in the U.S. at the time, and he received plenty of requests from friends and family to bring all kinds of items from the U.S. every time he returned to his home country, Nigeria. This showed that there was considerable demand for U.S. products among African consumers, and Foyalan founded MailforAfrica.com to capitalize on this market.

The partnership between eBay and MailforAfrica.com looks like a smart move benefiting both companies and their users. Sellers on eBay naturally benefit from an enlarged customer base.

When it comes to international expansion, aspects such as logistics, trade tariffs, payments, and economic regulations can be a major limitation, especially in Africa. By venturing with MailforAfrica.com, eBay is allowing its sellers to have access to new markets, while leaving those complicated matters in the hands of a local player with the specific know-how to circumvent operational hurdles and facilitate transactions. MailforAfrica.com is partnering with one of the leading e-commerce players in the world, and the new eBay Powered by MallforAfrica platform will offer plenty of interesting possibilities for its users.

eBay is quite a big corporation. The company is expected to produce $8.83 billion in sales during 2016. Income levels in Africa are, off course, comparatively low versus developed countries, and many consumers lack access to reliable online connections and e-commerce platforms. Even if eBay Powered by MallforAfrica turns out to be a success, chances are that it won't move the needle by much from a financial perspective over the short term.

On the other hand, the most-visionary companies are the ones that bet on growth opportunities with a strategic long-term mindset. It's not just about the current size of the market, but about it's potential for expansion in the decades ahead. Like Wayne Gretzky once said, "I skate to where the puck is going to be, not where it has been."

According to estimates from McKinsey's Global Institute, e-commerce could account for as much as 10% of all retail sales in the main African economies by 2025. This would represent a huge market opportunity worth nearly $75 billion in annual revenue.

The e-commerce business is a textbook example of an industry operating under the network effect. Buyers and sellers attract each other to the main e-commerce platforms in search of opportunities, so a bigger platform means a more-valuable service to users on both sides of a transaction. This creates a self-sustaining virtuous cycle of growing platform size and increased customer value for the top players in the business.

By betting on the African e-commerce industry while the market is still young and has plenty of room for growth going forward, eBay could be planting the seeds of massive growth opportunities for years -- and even decades -- to come.

Andrés Cardenal has no position in any stocks mentioned. The Motley Fool owns shares of and recommends eBay. Try any of our Foolish newsletter services free for 30 days. We Fools may not all hold the same opinions, but we all believe that considering a diverse range of insights makes us better investors. The Motley Fool has a disclosure policy.