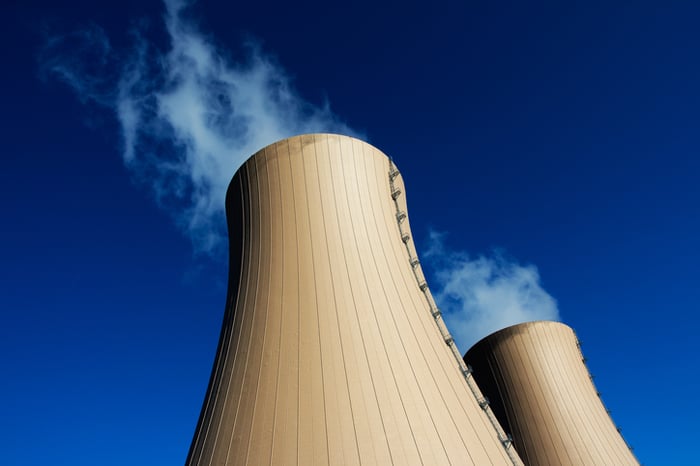 The state of Illinois accounts for just 4% of the country's population but 12% of its nuclear power generation. Eleven nuclear reactors generated 48% of the state's electricity, created thousands of jobs, and provided hundreds of millions of dollars in tax revenue in 2015. So, naturally, the state decided it would be a good idea to let Exelon (NASDAQ:EXC) close its nuclear power plants at Quad Cities and Clinton in the coming years.

Exelon had been working with environmental groups and state regulators to pass a rather reasonable proposal that would have provided modest subsidies -- $0.25 per monthly electric bill -- to keep nuclear reactors operating. When politicians dragged their feet on the legislation, the company reminded all stakeholders that it would be forced to close several reactors. Politicians called Exelon's bluff, the company announced formal plans to close two of its facilities, and now the state is poised to lose 12% of its electricity generation by 2018.

Ironically, Illinois is hoping to replace the lost carbon-free power generation with natural gas -- working against its Renewable Portfolio Standard -- and subsidized renewable energy. If that doesn't make sense, it shouldn't.

If it sounds like the state is making a huge climate mistake, you're right. Here's why.

If you've been an Exelon shareholder in recent years, then you've had to stomach a few dividend cuts. Difficult economics for nuclear power plants have been a major factor in those decisions. The Quad Cities and Clinton nuclear power plants lost a combined $800 million from 2009 to 2015 thanks to cheap natural gas and artificially cheap wind power. In response, the company lobbied the state to amend the Renewable Portfolio Standard it passed in 2007, which gave utilities an incentive to generate 25% of their electricity from renewable energy by 2025, with the Clean Energy Standard, which would have created incentives for all forms of carbon-free power, including nuclear.

The proposed Clean Energy Standard made sense on multiple levels. Illinois generates an awful lot of nuclear energy. And if the goal is to reduce emissions, then we should place a value on nuclear power's ability to do just that. Illinois also had a lot at stake financially. As I wrote in 2014:

(For the record, there are only 7.1 million registered passenger vehicles in Illinois.)

Of course, state politicians balked at properly valuing nuclear and now must face the consequences. I know what you're thinking: "How big of a climate mistake can it really be to let just two nuclear facilities close?" Well, judging from 2015 data, the word "colossal" might apply.

That's right: Taking Quad Cities and Clinton offline will remove more carbon-free energy from the grid than the total renewable energy generation from Illinois, Colorado, and Washington combined -- all because Illinois didn't think it was a good idea to approve a fee of $0.25 per monthly electric bill to keep its nuclear power plants operational.

While you could counter that nuclear isn't competitive with cheap renewables anymore, that neglects to consider the fact that wind energy is highly subsidized. In 2015, over 96% of wind power generated in the electric transmission system that Illinois participates in was sold at a cost of zero or less (link opens a PDF). Negative energy prices are made possible from federal production tax credits and state incentives for renewable energy. Although often noted as a boon for reducing electricity costs for consumers and emissions, negative prices come at the cost of artificially uncompetitive nuclear power plants. As is often the case, a nuanced view best explains the complicated situation.

The closures may not go through. By drawing a line in the sand and holding firm, Exelon may have just saved nuclear energy in Illinois -- and compromises in the state could lay the foundation for more appropriately valuing atomic energy throughout the United States.

The Wall Street Journal reported that environmental groups and regulators are now working out a deal that would keep Exelon's reactors online, promote renewable energy investment, and increase energy efficiency across the state. In other words, Illinois may be drafting a framework that includes nuclear energy in subsidies that create incentives for all sources of carbon-free electricity, not just wind and solar. That may not be enough to justify building new nuclear power plants, but it could provide a major boost for Exelon shareholders by wiping out huge losses and perhaps allowing for dividend increases in the next few years.

If politicians and environmental groups don't reverse the decision, the closures will have the same impact as closing more than twice all the wind and solar generation in Illinois. The idea to replace carbon-free power with carbon-free power makes little sense from a climate perspective, and if the wind and solar used to replace lost nuclear generation is subsidized, then the decision makes little sense from an economic perspective as well. Keep an eye on whether Illinois creates a framework that values all carbon-free energy and realizes it can set a precedent for the rest of the country.

While nothing is guaranteed at the moment, Exelon investors shouldn't lose hope just yet. Otherwise, we may all be in trouble.