What: After initially slumping amid the fallout of the U.K.'s "Brexit" decision to leave the EU, crude bounced off its lows and settled up about 2% this week to around $48.50 a barrel. This volatility, however, led to some unusual moves in the energy sector, with dozens of stocks moving double digits in either direction. According to data from S&P Global Market Intelligence, the biggest moves this week were made by Denbury Resources (DNR), Bristow Group (BRS), EP Energy (EPE), CONSOL Energy (CNX -4.44%), and Exterran (NYSE: EXTN): 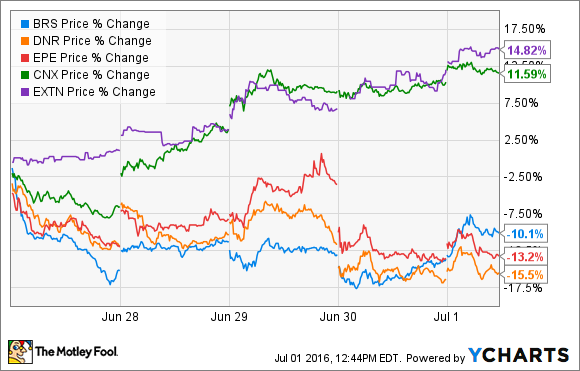 So what: Of that group, only Denbury Resources had any company-specific news to fuel its double-digit drop. That news came via an SEC filing in which the company detailed two recently completed transactions. First, Denbury Resources announced the sale of its remaining non-core assets in the Williston Basin for $58 million in cash; the company intends to use that money to pay down borrowings under its credit facility. In addition, Denbury announced that it had reached a settlement to end its litigation over the Delhi Field. Under the terms of that agreement, Denbury will pay $27.5 million and convey a 25% interest in a non-producing interval while receiving a 0.2226% overriding royalty interest in a producing interval. This settlement closes the claims and puts this issue in the rearview mirror.

Meanwhile, Bristow Group's turbulent week was due to market fears surrounding its direct exposure to the U.K. following the Brexit vote. The bulk of that exposure is from Bristow Group's contract to provide search-and-rescue services in the U.K. The market is concerned that this agreement might not pay off as expected due to the sinking British pound.

Finally, the double-digit gyrations of CONSOL Energy, Exterran, and EP Energy were nothing more than meaningless moves caused by market volatility. That said, CONSOL Energy and Exterran moved higher as the market recovered, with abating Brexit fears lifting a weight off their stock prices. On the other hand, EP Energy went in the opposite direction, in part due to renewed concerns about its balance sheet, now that crude appears to have hit a ceiling at $50 a barrel.

Now what: This week was a good reminder that not all big moves are meaningful; sometimes the market overreacts to news or fears. That was certainly the case in the days since the Brexit vote, with the market taking a wild ride and yet not going very far.