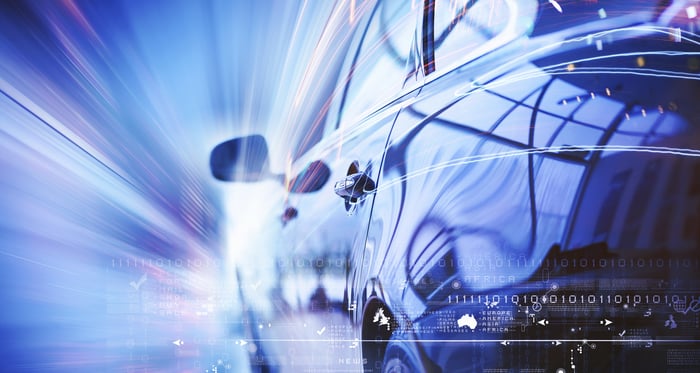 Halfway through 2016, shares of NXP Semiconductors (NASDAQ:NXPI) have fallen 7.4%. The Dutch maker of analog and mixed-signal chips took the Brexit news particularly hard, and share prices plunged 14% over the next two days.

That's the story so far. What should NXP investors expect from the company in the second half of 2016?

NXP has published two quarterly reports this year. These were the first two reports after the $14.8 billion merger with Texas-based peer Freescale Semiconductor. NXP beat analyst expectations across the board in both reports, all without sparking any significant share price rallies.

The next report will come later this month or in early August. In that second-quarter presentation, NXP expects to show roughly $2.35 billion in total revenue and adjusted earnings of approximately $1.35 per diluted share. Analysts have aligned their consensus estimates with the official guidance figures.

Management has described 2016 as a transitional year for NXP. The company is working through a complex merger, and geopolitical and economic issues have slowed down demand for some of NXP's core products. So this is not a huge growth year, but a time to build the growth platform for the next several years.

At a recent industry conference, NXP CEO Rick Clemmer explained that he wants to outgrow the broader semiconductor market by an annual factor of 50% over the next three years. At the end of that period, Clemmer wants to be at least 50% larger than the runner-up company in each of its key focus markets.

"We don't want to be No. 1 or No. 2 like many semiconductor companies talk about," Clemmer said. "We want to be the true industry leader, at least 50% larger than the No. 2 player."

About 41% of NXP's overall sales come from the automotive sector today. That division got a heavy shot of adrenaline from the Freescale merger, as both companies held individual leading roles in this important market. Together, the new NXP is the largest automotive computing player by a wide margin. Obviously, this is the single most important area of focus for the next few years, where Clemmer hopes to fortify his leadership even further.

In a larger sense, even the automotive sector becomes a part of the Internet of Things megatrend. Connecting, controlling, and securing a world full of networked devices is NXP's mission for the next decade.

"That's really the purpose of what we did with the combination of Freescale and NXP," Clemmer said.

Focus on the far horizon

As you've seen, Rick Clemmer's goals are bold and ambitious. They are also reachable from where NXP stands today -- but only in a true long-term sense.

None of these audacious goals will be fully reached in 2016, or even 2018. The Freescale integration has flowed smoothly so far but may run into stumbling blocks at any point. Market demand is always lumpy and unpredictable in the short term. And NXP's share prices may not soar anytime soon.

The key here is to accept these facts as short-term distractions. NXP is not a "get rich quick" kind of stock, and that's perfectly fine -- those volatile beasts often leave investors deeply disappointed anyway.

Clemmer is building a semiconductor giant for the long haul, and that's the mindset investors need to bring to this stock.

Don't ask what NXP can do for you in 2016. You should ask where the stock is going to be in 2025, and I think you'll appreciate the answers to that question.