An astronaut needs to take a (literal) ton of food to survive on Mars for a year. But what if we could grow it there?

Meanwhile, investors want to know: How much is all of this going to cost? And if it costs too much, what are the chances Congress will agree to pay for it?

The answer comes in two parts: First, it's going to cost a whole lot. But second -- it's probably not going to cost quite as much as you think.

Estimates of the cost of a manned NASA mission to Mars are legion, and all over the space map. Last time we checked, just developing a Space Launch System (SLS) to get all the parts assembled in orbit to build a Mars-going spacecraft was likely to cost about $7 billion.

America's best and brightest space companies -- led by Boeing (BA -1.08%), but with a lot of help from Lockheed Martin (LMT -0.58%), Orbital ATK, and Aerojet Rocketdyne -- are hard at work getting SLS operational already. But even once it's ready, you still need to build the spaceship -- let's call it the "SS Valentine Michael Smith" for fun -- in pieces, and pay for multiple SLS missions to put those pieces in orbit between the Earth and the Moon.

And then there would be the cost of the actual Mars mission, estimated at anywhere from $30 billion to $160 billion, including the cost of keeping astronauts alive on the Red Planet, and en route to and from same, over the course of, perhaps, an 18-month mission.

Indeed, a successful NASA-led Mars mission cannot possibly cost more than $160 billion -- because right now, that's all the money that NASA can expect Congress to give it, by maxing out its space-exploration budget and spending every penny on Mars prep between now and 2033. If it ends up costing more than that, we're going to need to farm some of the work out to our friends in Europe, and maybe even in Russia, China, and India, some of whom are planning their own Mars missions.

Care and feeding of astronauts

Visiting Mars will probably not be a one-shot deal. In addition to the spaceship that makes the voyage and carries the astronauts, multiple pre-positioning missions will precede the main mission, depositing equipment, fuel, and supplies to await the astronauts upon their arrival.

How much is all of that going to cost? According to NASA estimates, "a crew of four on a three-year martian mission eating only three meals each day would need to carry more than 24,000 pounds (10,886 kilograms) of food." That works out to 6,000 pounds of food per astronaut, or roughly one ton per astronaut per year.

Getting all of that food from Point A (Earth) to Point B (Mars) thus becomes an exercise in (relatively) simple (if expensive) mathematics:

= the cost of keeping one astronaut fed for one year

Mars cost: How to cut it

Those are some big numbers -- but we can cut them. For one thing, Boeing and Lockheed Martin are hard at work building cheaper launch vehicles to cut launch costs to as little as $15 million per ton by as early as 2020, long before any Mars mission could depart. 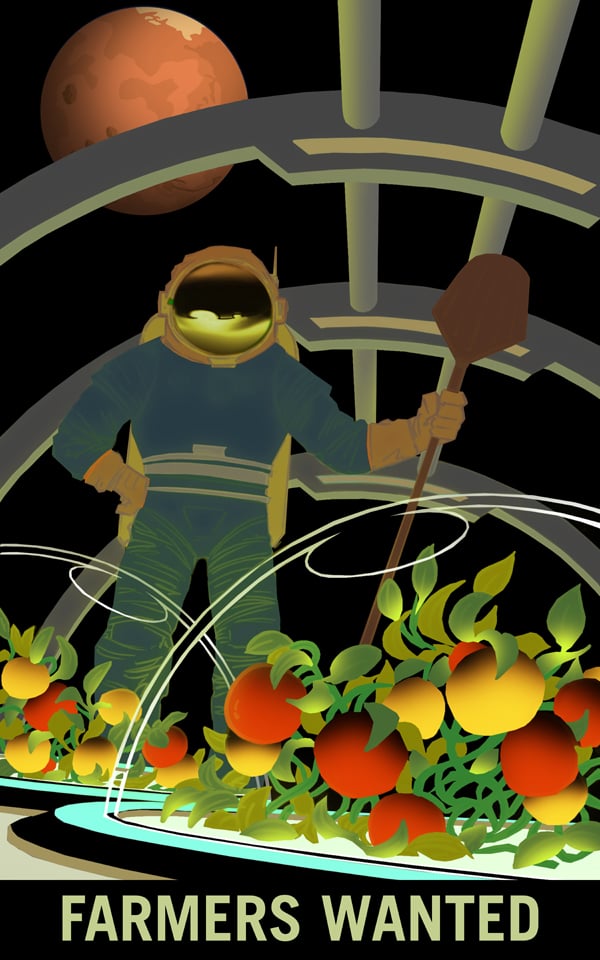 At the same time, scientists in the Netherlands, where the Mars One project is planning its own manned Mars mission as early as 2026, have just conducted an experiment proving the feasibility of growing food on Mars.

According to Dutch researchers, Martian soil, even though heavily contaminated with heavy metals such as cadmium, copper, and lead, can be used to safely grow "radishes, peas, rye and tomatoes" that contain no unsafe levels of these toxic substances. British newspaper The Guardian reports that, since 2013, the Dutch have successfully raised 10 such crops using NASA-developed Mars-like soil -- and pronounced at least four of them edible so far.

Granted, this doesn't help much with the cost of "airline meals" -- the food astronauts will need en route to and from Mars. It may not even help on NASA's first short Mars mission, as astronauts may not be on Mars long enough to grow crops. But for longer subsequent Mars missions by NASA, or actual colonizations such as the Dutch (and Elon Musk) are contemplating, it looks like raising food on the Red Planet could be a viable option.

It could eliminate the need to move literal tons of supplies to Mars, and make the colonization of Mars a whole lot cheaper than we used to think.

Rich Smith does not own shares of, nor is he short, any company named above. You can find him on Motley Fool CAPS, publicly pontificating under the handle TMFDitty, where he's currently ranked No. 278 out of more than 75,000 rated members.