What: Shares of cosmetics specialist Elizabeth Arden, Inc. (NASDAQ: RDEN) popped 50% last month after it agreed to be acquired by rival Revlon, Inc. (NYSE:REV). As you can see from the chart below, virtually all of Elizabeth Arden's gains came on June 17, the day of the announcement. 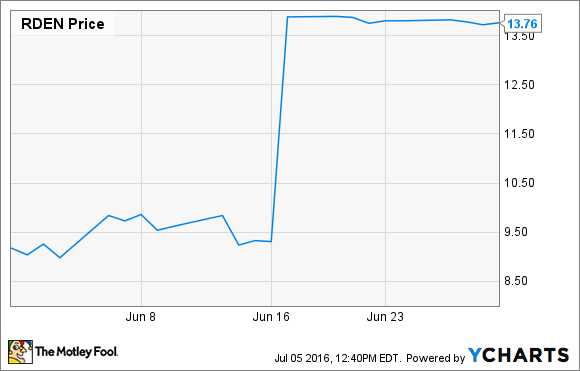 So what: According to the terms of the deal, Revlon will pay $14 a share for Elizabeth Arden, valuing the company at $870 million in an all-cash transaction. Revlon shares increased 7% on the news, indicating approval from both sides of the negotiating table.

The two companies called the acquisition "highly complementary," saying the new business would benefit from greater scale, expanded global footprint, and diversified presence across all major beauty categories and channels." The press release also said the two companies expect to realize cost savings of $140 million from the combination.

Now what: With Elizabeth Arden stock trading near $14 today, investors seem to be confident that the deal will go through as planned. While Arden shares had traded higher as recently as last year, the stock had plummeted since a peak in 2013 near $50 as the company's put up quarterly losses and seen sales slide. As the industry consolidates and competition intensifies, selling to Revlon looks like the best move for Elizabeth Arden. The deal is expected to close by the end of the year.