Please ensure Javascript is enabled for purposes of website accessibility
Log In Help Join The Motley Fool
Free Article Join Over 1 Million Premium Members And Get More In-Depth Stock Guidance and Research
By Jay Jenkins – Jul 6, 2016 at 6:24AM

The auto insurance industry is not exactly excited about self-driving cars.

Warren Buffett has said that "no one likes to buy auto insurance. Almost everyone, though, likes to drive." He's right, and as a result, auto insurers have thrived over the last 80 years.

But what happens over the next 80 years, as self-driving cars powered by artificial intelligence replace the need for a driver altogether? What happens to the auto insurers then?

These four companies dominate the market in large part because of their ability to write policies for cheap. Buffett's quote above explains why -- people need their cars, and insurance is a legal requirement of driving. Insurance does not impact the experience of driving or the ability to get from point A to point B. Consumers don't ask, "Which insurance company will make my drive faster and more enjoyable?" Instead, they ask, "What insurance company will give me the coverage I need with the least cost and hassle?" 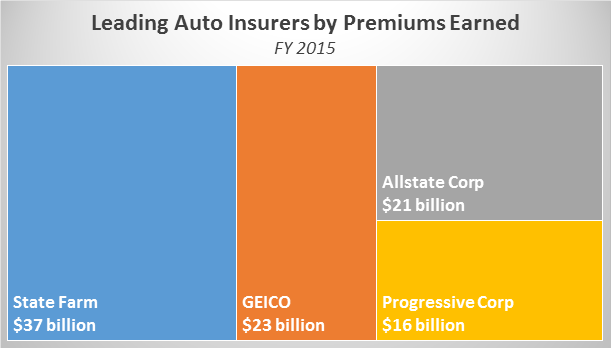 Buffett makes the same point, saying that auto insurance becomes "a major expenditure for most families. Savings matter to them -- and only a low-cost operation can deliver these."

In a future where self-driving cars dominate the road, this attitude is only going to grow stronger. Branding will matter less and less, while pricing will matter more and more.

Self-driving cars will reduce accidents, driving a number of key changes in the auto insurance industry

Currently, highway statistics show that about 90% of auto accidents are caused by driver error. Human driver error, to be more precise.

In the not so distant future, human error will be irrelevant and the number of accidents on the road is likely to decline dramatically. Lower accident rates will reduce insurance claim payouts, and thusly, reduce the premiums required to cover those losses and generate an underwriting profit. That's great for consumers, but less so for the top line at insurance companies.

With fewer premium dollars to be spread around, the entire industry will shrink. That's universally bad for insurers, but I think it will be worse for the smaller players. The big four insurers and a few other large players will survive because they have the scale to afford writing ever cheaper policies.

At the same time, fewer accidents will reduce the number of interactions between insurance companies and consumers. In today's market, an insurance company's ability to quickly approve and payout a claim can be a powerful competitive advantage. In a future with 90% fewer accidents -- and therefore dramatically fewer insurance claims -- this interaction point becomes less frequent and less of a differentiator. Providing a great customer experience after an accident will still be important, but not nearly as important as price.

As the industry pie shrinks, the giants will turn to increasing their market share to offset declining revenue. I think that competition will force smaller competitors into mergers and acquisitions, or run them out of business altogether. State Farm, GEICO, Allstate, and Progressive have the scale to compete in a low cost environment, and I think they will survive and could potentially even thrive. The key is having the size to protect their margins as claims and premiums shrink.

Self-driving cars will throw a wrench into the auto insurance business. That much is clear. How the business will transition from today's drivers to tomorrow's is much less so.

For example, should there be different policy types for self-driving cars versus human-navigated vehicles? What about vehicles that have autonomous capabilities, but also allow for the human driver to take over?

How will insurance companies choose to insure cars with different self-driving systems? Would a car powered by software from Alphabet command a different premium than one by Apple, General Motors or another provider? What about autonomous ride sharing services like many predict Uber and Lyft will become? Or autonomous trucks carrying freight on the interstates?

Each scenario will have its own unique risk profile, but as of yet no one knows empirically what those risks will be.

What premiums would each of these different policies require? How far will claims and payouts decline? For the insurance companies with the scale to compete, are there opportunities for even more efficiency that could perhaps increase profit margins at the same time revenue declines?

Again, it's too early to understand exactly how these issues and questions will be resolved. The technology is so new and the implications so large that we don't even know what we don't know.

In the meantime, the auto insurance industry continues on with business as usual, fearfully awaiting the arrival of the first mass-produced autonomous vehicle. Allstate Chairman Thomas Wilson predicted the arrival of self-driving cars would have "the most detrimental impact on auto insurance." Buffett said that at GEICO, "we would not be throwing a party at our insurance business" when a self-driving car arrives on the market.

Suzanne Frey, an executive at Alphabet, is a member of The Motley Fool's board of directors. Jay Jenkins has no position in any stocks mentioned. The Motley Fool owns shares of and recommends Alphabet (A shares) and Berkshire Hathaway (B shares). The Motley Fool recommends General Motors and Progressive. We Fools may not all hold the same opinions, but we all believe that considering a diverse range of insights makes us better investors. The Motley Fool has a disclosure policy.