What: Shares of social network Twitter (NYSE:TWTR) rose 11.1% in June, according to data provided by S&P Global Market Intelligence. The gains were driven by the news that Microsoft agreed to acquire fellow social network LinkedIn (NYSE:LNKD.DL) for $26.2 billion.

So what: Twitter stock has been in the doldrums all year, driven down by a stagnating user base, massive losses, and executive departures. Nothing really changed at Twitter during June, but the LinkedIn deal raised investors' hopes that a large tech company would swoop in and buy Twitter. 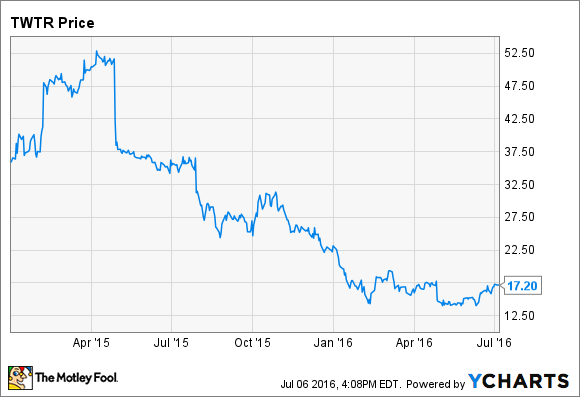 Twitter had 310 million monthly active users during the first quarter. LinkedIn had 433 million members total, but only 106 million of those used the service on average each month. With Microsoft willing to pay $26.2 billion for LinkedIn, Twitter would be worth far more if valued based solely on monthly active users. Prior to the LinkedIn deal, Twitter had a market capitalization of just $10 billion.

Twitter and LinkedIn are very different, though. While Twitter relies on advertising to generate revenue, LinkedIn produces the bulk of its revenue from its talent solutions segment. This includes products that help employers recruit employees. LinkedIn has positioned itself as a key tool for people looking for jobs and for employers looking to hire, and that makes the platform more valuable.

Now what: While Microsoft's acquisition of LinkedIn makes strategic sense, with the company planning to integrate the social network into its products, it's unclear which, if any, large tech company would be interested in Twitter. The company is posting major losses, $521 million last year alone, and revenue growth is slowing down. Twitter expects second-quarter revenue to grow by about 20% year over year, a steep deceleration compared to the first quarter.

The rise in Twitter's stock price in June was driven by speculation that Twitter would be acquired. It's very possible that the company is eventually bought out, especially if it continues to struggle to turn itself around. But investors shouldn't expect the kind of valuation that LinkedIn received.