The Russian search engine is on a roll, but is it a buy at today's prices?

Back on Jan. 18, I published an article explaining why Russian search-engine leader Yandex (YNDX -6.79%) could have a huge 2016. At the time, I wrote:

With Yandex showing surprising resilience in the face of this market share loss, it's exciting to guess about what the company could be capable of when (1) it regains lost market share, (2) the Russian economy improve[s], if only incrementally, and (3) the previous two factors start to drop all the way down to Yandex's bottom line.

Since then, shares are up 75%. Does that mean I was right in my prognosis? Yes and no. More importantly, what does it mean for investors looking to buy the stock today?

Yandex is standing up to the world's second-largest company

Perhaps the most important takeaway we've learned from Yandex's two earnings releases so far in 2016 is that the company has started to take back some of the search market share it lost to Alphabet's (GOOG -1.24%) (GOOGL -1.02%) Google. 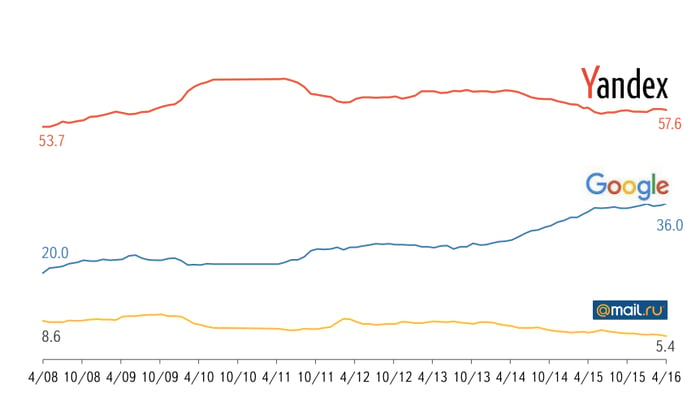 While Google remains a force to be reckoned with, Yandex was able to grow its share of the Russian search market from an average of 57.1% during the third quarter of 2015 to 57.6% today. That may seem like a small improvement, but it's the first sign of a stable market share the company has produced since early 2014.

It's also encouraging for investors that Google is in the crosshairs of Russian regulators. Yandex filed antitrust claims that Google's automatic installment of its search engine in Android bundles is anticompetitive. The Russian courts initially agreed with Yandex in 2015, and an appeals court upheld that ruling earlier this year. Google is attempting to take the case to a higher court, but Yandex management believes the entire issue will be resolved -- in its favor -- before the end of the year.

That could lead to even more market-share gains over the next two years.

Like Google, Yandex's primary revenue source is via advertising. During the company's first quarter, management revealed that this division is performing extremely well. What's more, some of the ancillary businesses -- which could be key drivers of growth in the decade to come -- have picked up over the last 12 months.

It should be noted that while revenue has been booming, earnings haven't followed the same path. In constant currency, earnings have fallen 2% over the past 12 months. But that's for good reason: The company is investing heavily in the infrastructure to make its e-commerce, taxi, and classified platforms more powerful.

Apparently, Wall Street has looked past this and rewarded the company with a stock that's had a significant run-up.

So is Yandex stock a buy today?

There are many ways to value a company. Here are a few of my favorites and where Yandex currently stands:

Data source: SEC filings. Based on conversion of 64 rubles to a dollar.

These certainly aren't cheap valuations. But it should be noted that the Russian ruble currently sits at about half the strength relative to the dollar that it was in 2010. There's no telling if that course will ever reverse itself, but -- all else being equal -- if the ruble were where it was in 2010, all of the figures above could be cut in half.

At the end of the day, I own shares of Yandex because it is run by a visionary founder who has significant skin in the game, and I believe that the Russian people will use the company's products more and more as they flock to the internet. If you don't own shares today, it's worth exploring Yandex as a stock to purchase. Otherwise, this isn't exactly in "screaming buy" territory like it was in January.