The former fast-casual darling has a new ad that takes shots at fast-food companies for the way they do business, but some of the shots hit awfully close to home.

Chipotle Mexican Grill (CMG -0.07%) seems to have the recipe for a viral video down pat. It cooks up an effective storyline that ultimately sings its "food with integrity" praises. It teams up with a skilled animation studio to help play out its heart-tugging tale in a couple of minutes. It gets an unlikely musical celebrity to perform a catchy cover of a song in an equally unlikely genre.

The struggling burrito roller is at it again. It rolled out A Love Story on Wednesday, a tale of Evie and Ivan, two kids that open rival beverage stands across the street from one another. Evie's offering up homemade lemonade. Ivan's serving up fresh-squeezed orange juice. The competition grows, and before long they're in a game of one-upmanship that leads to rudderless menu additions and a turn to artificial ingredients. The clip is backed by Alabama Shakes' Brittany Howard and My Morning Jacket's Jim James covering, Backstreet Boys' I Want It That Way. It's not as catchy as the 2013 clip when Willie Nelson was covering Coldplay's The Scientist but it'll do.

True to the video's title, this is a love story. Evie and Ivan realize that they love each other -- and they love the way they used to do things. If you haven't seen the clip now may be a good time to catch it, because I'm about to dig into how some elements of the video may be hitting too close to home for Chipotle itself.

The promotional computer-animated clip ends with Evie and Ivan opening a food truck, back to serving their signature beverages along with food consisting of all-natural ingredients. This jibes with Chipotle's penchant for quality, but there's also a big difference between a couple running a food truck and a 2,066-unit chain.

Let's go over some clips from the video that detail how Evie and Ivan are losing their way, but doing things that may seem strikingly similar to stuff that Chipotle itself has been doing. 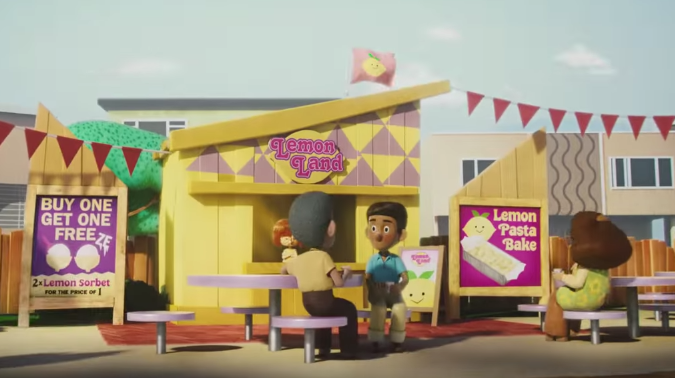 An early ring in the downward spiral of Evie's Lemon Land finds her offering Buy One Get One lemon sorbets. Chipotle's put out numerous discounts aimed to win back customers scared off by last year's E. coli outbreaks -- some deals being BOGO offers. Chipotle also routinely offers them for teacher and nurse appreciation days. One can also rightfully argue that the temporary Chiptopia card-based rewards program is a BFGO -- Buy Four Get One -- deal.

Chipotle's camp could rightfully argue that the BOGO offer is mocking the diversification into lemon sorbet freezes more than discounting, but a lot of the video takes shots at low price points -- and that's been at the heart of many freebies and BOGO deals the company's offered in recent months. 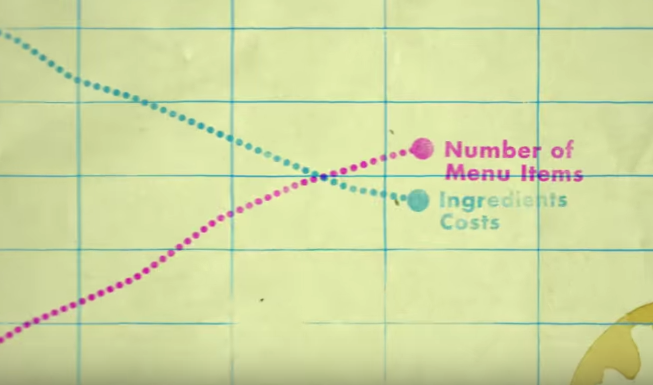 The menu additions to Lemon Land and Ivan's Mister Orange come fast and furious, and a graph shows how the escalating number of menu items is inversely related to the costs of its ingredients. Chipotle doesn't skimp on food costs. It walks the talk on that front. However, mocking Evie and Ivan for menu additions seems to fly in the face of a company that has added Sofritas and is gearing up to roll out chorizo as another protein option. Raise your hand if you remember when brown cilantro rice wasn't an option.

Drive-thru windows get knocked in the video. Chipotle has sworn off the commuter convenience, arguing that it gets in the way of the customization process as a customer physically walks down the assembly line. I'm not sure how that flies with its mobile app ordering or catering operations, but that's not why I feel that taking shots at McDonald's (MCD 0.22%) and other high-volume fast-food chains borders on hypocritical. Drive-thru windows came about because they tended to more customers, and that's something that Chipotle has historically treated as a sport.

As recently as last year Chipotle would routinely talk up its throughput improvements. It has pointed out how its most efficient locations can crank out as many as 350 transactions in an hour. A need for speed seems more in line with fast-food chains than the original food stands of Evie and Ivan.

I was just going to go through those three clips from the new video, but I have to call out the more direct shots to McDonald's -- like the one in the above still poking fun at all-day breakfast offerings and value menus -- as below the belt. McDonald's was Chipotle's parent company before it decided to spin it off as its own company.

Chipotle doesn't have to pay homage to McDonald's. Its "food with integrity" battle cry is often at odds with Mickey D's. However, it doesn't have to single it out as viciously as it does here. Stay classy, Chipotle. Remember that one of the two chains has come through with back-to-back quarters of strong comps -- and Chipotle isn't that chain.

Rick Munarriz has no position in any stocks mentioned. The Motley Fool owns shares of and recommends Chipotle Mexican Grill. We Fools may not all hold the same opinions, but we all believe that considering a diverse range of insights makes us better investors. The Motley Fool has a disclosure policy.