Fashion and design companies Vera Bradley (NASDAQ:VRA) and Coach (NYSE:TPR) have been beat up by consumers. Both have struggled with falling sales over the last few years and are looking for a turnaround in a highly competitive industry. Is there hope that either of them can return to growth? If so, which is the better bet for investors to make?

A small company with lots of irons in the fire

Vera Bradley is a small women's accessories company that makes everything from handbags and luggage to fragrances and eyewear. Sales totaled $503 million in 2015. Since going public in October 2010, Vera Bradley has seen revenue nearly double before receding over the last three years. 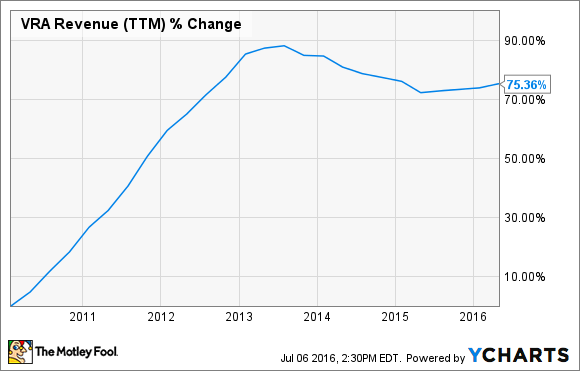 Like other retailers that rely on foot traffic, Vera Bradley has been hit by the slowdown in consumer spending at department stores and malls. Recognizing this, the company has been working to revitalize its online store. A new look and mobile-friendly website that includes easier navigation, express checkout, PayPal compatibility, and order online/pickup in-store features will launch in September.

Vera Bradley is also slowing down its new store openings this year. Four new full-line stores and six factory outlet stores will be opened during 2016. The current count is at 111 and 41 full-line and factory stores, respectively.

Vera Bradley is known best for its cotton bags, which are still the biggest segment in sales. The company hopes to expand into other materials as well. Microfiber and leather are newer additions to its product lineup, and the current cotton offerings are continually revamped and modernized.

One could argue that Vera Bradley is too diversified in its fashion offerings, but the shotgun approach might be starting to work. In its lastest quarter, the company saw a 4% year-over-year increase in sales and expects that growth figure to hold for the rest of its fiscal year. Management expects profits to increase between 10% and 20%, driven by the increase in sales and lower selling costs.

An iconic brand looking for a rebound

Coach is a New York-based designer of leather goods and accessories for men and women. The company had sales totaling $4.2 billion last year, down over 30% from its peak in 2013. 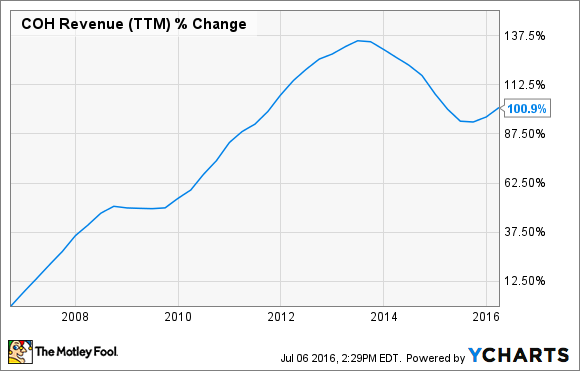 While Coach's sales have been affected by a slowdown in spending at stores, the company has also been hit by a strengthening U.S. dollar. Coach does more than a third of its business overseas. As the U.S. dollar strengthened against other currencies in the last two years, this lowered the value of the company's sales in other countries.

There are limited options for Coach in dealing with the international currency situation, but the company has taken steps to rebound where it can. Sales have grown by double digits in key growth markets like China and Europe as new store openings and an increased marketing presence in those regions remain a focus for the company.

But while growing internationally has been a priority for Coach, its rebound has been fueled primarily from the overhaul of its product lines. It has been working hard updating its leather goods, hiring a new creative director three years ago to do just that. The company is also transitioning from a "specialty retailer" focusing on handbags to a "house of fashion," featuring accessories and clothing for men and women.

In line with this effort, Coach purchased luxury shoe designer Stuart Weitzman last spring. Though the acquisition is still new, it has already given a boost to profits, accounting for 4% of the bottom line in the most recent quarter.

A final area of focus has been decreasing costs. Coach has been closing down underperforming stores, decreasing distribution and selling costs, and recently announced a 10% cut in corporate staff. The company has incurred costs over the last two years as a result, but management sees benefits starting to accrue from these efforts starting later this year.

Coach seems to be further along in its rebound efforts than Vera Bradley. And although sales and profits have been impacted negatively by foreign currency exchanges, Coach's international business has continued to grow briskly despite the foreign-exchange headwinds.

Coach has also overhauled its brand, image, and product line, and its domestic sales of leather goods have started to post increases again even when excluding the new business from the Stuart Weitzman acquisition. Vera Bradley's diversified mix of fashion accessory sales posted gains in its last quarter, but the company is still trying to get its e-commerce platform up to speed to offset the struggling department store segment.

Taking these factors into consideration, I think shares of Coach are a better bet for investors right now.