It was an eventful week for Tesla Motors (NASDAQ:TSLA) stock. From worse-than-expected second-quarter deliveries to some very public back-and-forth between Fortune and Tesla about how the electric-car maker handled itself after a fatal Model S accident that occurred while Autopilot was activated, here's a review of the biggest Tesla news from the week.

While these deliveries were up 25% compared to the year-ago quarter, they were 15.5% below management's expectations for the quarter. Tesla said in its first-quarter letter to shareholders it expected to deliver 17,000 vehicles during the quarter.

Tesla blamed the miss on a steep production ramp that occurred too late during the quarter for the produced vehicles to be delivered to customers before Q2 ended.

"In total, 5,150 customer-ordered vehicles were still in transit at the end of the quarter and will be delivered in early Q3," Tesla said in a press release. "That amount was higher than expected (there were 2,615 vehicles in transit to customers at the end of Q1) and is more than a third of the number of cars that completed delivery in Q2."

As this is Tesla's second disappointing quarterly delivery figure in a row, it's beginning to create a pattern of misses, raising concerns about Tesla's ability to continue ramping up production in line with its ambitious production plans.

Following a fatal Model S crash that occurred while Tesla's Autopilot, or its automated driver-assist technology, was activated, Fortune argued the crash was material to the company's business and should have been disclosed before Tesla's May stock offering. But Tesla CEO Elon Musk said the market's mute response to the news of a fatal Model S crash proved it was immaterial and that Fortune misrepresented what Tesla knew about the crash and when. Further, Tesla released a blog post detailing why it believed it took the correct actions regarding the fatal crash.

While the story sparked global, major news coverage, investors shrugged it off, seeming to suggest it was, as Musk argued, immaterial to shareholders' opinion of the stock's value. 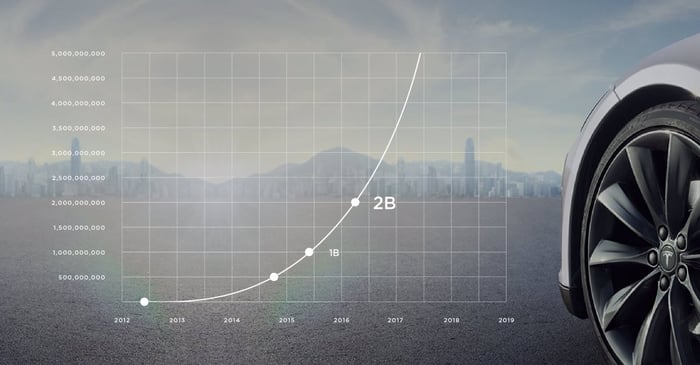 On Friday, Tesla wrapped up the week with an invitation to Tesla owners to join in on a "three month Electric Road Trip around the world" in which Tesla will showcase "the uncompromised capabilities of Model S and Model X to new communities of enthusiasts" and toast to driving "over two billion miles."

Tesla will host events across U.S., Europe, China, and Australia, mostly at locations where its retail presence is lacking. At these events, owners will "share [their] favorite road trip experiences with fellow Tesla owners and like-minded fans," reads the invitation sent to owners by email.

In connection with the invitation, Tesla launched a live counter of logged Tesla miles, revealing its fleet of vehicles had surpassed 2.5 billion miles.

Since Tesla opts to sell vehicles directly, this initiative looks like yet another unique method of tapping into customer loyalty to spur demand for its vehicles. Tesla is already doing this with its referral program, which Tesla has admitted was launched to help reduce retail and sales expenses. Word-of-mouth efforts are particularly important to Tesla because the company doesn't yet pay for any advertising.

Tesla stock gained a just 0.1% during the week -- not bad following news of its worse-than-expected second-quarter deliveries.