What: Shares of Abercrombie & Fitch (NYSE:ANF) dipped 11% last month, falling on Brexit-related concerns and on continuing malaise among teen apparel retailers. As you can see from the chart below, the bulk of Abercrombie's slide came following the June 23 UK referendum to leave the European Union. 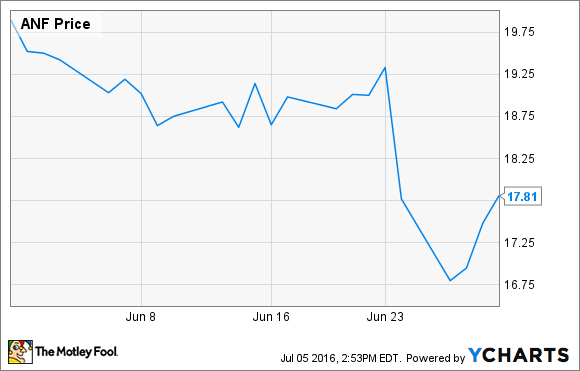 So what: The deck was already stacked against Abercrombie and other teen retailers, with recent bankruptcies from American Apparel and Aeropostale. The company posted a wider-than-expected loss in its first quarter, and the Brexit vote only adds further uncertainty to the struggling sector. Abercrombie has two stores in the UK and several more in the continent, in addition to an e-commerce presence, but tariffs, currency issues and other complications could arise from the UK's departure.

The general macroeconomic uncertainty is also problematic for a sector already bleeding revenue.

Now what: Abercrombie's stock fell 13% in the two days following the Brexit vote, but rebounded modestly along with the market comeback, gaining 6% over the rest of the week as investors' worst fears seem to have been assuaged.

The greater concern for Abercrombie investors should be the company's secular woes, as same-store sales fell 4% and EPS loss for the quarter widened from $0.53 to $0.59. On a yearly basis the company remains profitable, with analysts expecting EPS of $0.84 for the year. However, if the retailer's profits continue to compress, it may be forced to cut its quarterly dividend of $0.20 a share.

The uncertainty from Brexit is only one more problem for a retailer struggling to adapt to changing consumer demand.