Widespread uncertainty triggered by the Brexit vote knocked the semiconductor stock down.

What: Shares of NXP Semiconductors (NXPI 2.46%) dropped 17.1% in June, according to data provided by S&P Global Market Intelligence. Given that NXP is based in the Netherlands, the Brexit vote seems to be the principal reason the stock tumbled.

So what: Uncertainty in Europe is doing a number on European stocks, and NXP is no exception. But the stock price had been in decline since well before the United Kingdom voted to leave the European Union. Following a multiyear rally, shares of NXP were already well below highs reached in 2015. 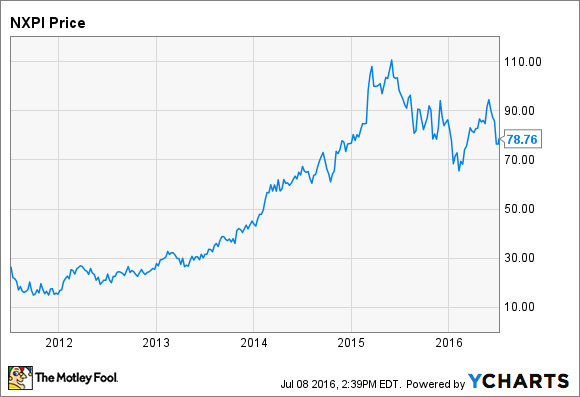 There are a few things negatively affecting NXP's business. First, demand had been weak in essentially all of the company's end markets. During the first quarter, revenue fell 11% year over year, adjusted for the acquisition of Freescale Semiconductor. The automotive segment grew, but all of NXP's other segments posted significant revenue declines. The semiconductor industry is cyclical, and NXP isn't immune to its ups and downs.

Now what: The Brexit vote adds another layer of uncertainty for NXP. The current downturn in demand in nearly all of its segments should eventually reverse, but the long-term impact of the U.K. leaving the European Union is unclear. Investors knocked down the stock in June due to this uncertainty.

Going forward, NXP's acquisition of Freescale positions the company to capitalize on the trend of automobiles becoming smarter and more connected. More than one-third of NXP's revenue now comes from the automotive segment, and it's already launched a self-driving car-computing platform to help enable self-driving cars. For long-term investors, the decline in June could represent an opportunity.