The retailer's credit business continues to be a disaster.

What: Shares of retailer Conn's (CONN -13.52%) fell 32.3% in June, according to data provided by S&P Global Market Intelligence. The company reported disappointing quarterly results on June 2, missing analyst expectations by a wide margin. An analyst downgrade and a weak May sales report followed, adding insult to injury.

So what: Conn's reported a 6.8% year-over-year increase in quarterly revenue, but same-store sales dropped 1.3%. Revenue missed analyst expectations slightly, but the real story was earnings. Conn's reported an adjusted loss of $0.31 per share, $0.37 below analyst expectations. In the prior-year period, Conn's had posted an adjusted profit of $0.44 per share.

A deterioration in the credit business was the culprit behind this surprise loss. The company has been attempting to tighten its lending standards in order to turn around its credit business, but this has had a negative impact on retail sales. Nothing seemed to be working during the first quarter, with both segments suffering earnings declines.

Piper Jaffray downgraded the stock in response to the company's earnings report, lowering its price target from $16 to $8.50. More bad news came on June 7, when Conn's reported May sales. Same-store sales slumped 7.6%, and the 60-day delinquency rate rose 40 basis points year over year to 8.9%.

Now what: Following June's decline, Conn's stock has lost 90% of its value since peaking at the start of 2014. A multiyear run, driven by loose lending that drove rapid sales growth, has now been completely undone. 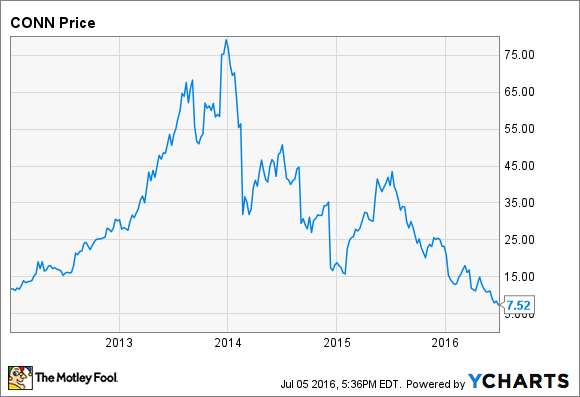 Going forward, Conn's faces the difficult task of returning its credit business to profitability while not decimating its retail sales by rejecting too many risky borrowers. It's a balancing act that the company has struggled with, and investors don't appear all that confident that Conn's can get it right.