The popular cruise line was hit by worry over an event with global repercussions at the very beginning of the lucrative summer season.

So what: Shares were roughly flat for most of the month. The Brexit vote then roiled global stock markets, and Royal Caribbean found itself tossed on a turbulent sea. Its stock declined more than 9% on June 24. 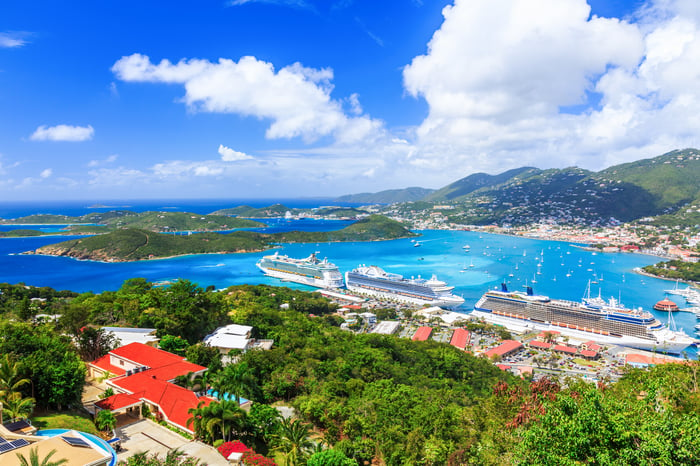 Now what: Several weeks later, shareholders of travel and leisure companies such as Royal Caribbean are still fretting over the potential for repercussions of the Brexit vote to hinder earnings in 2016, and perhaps beyond.

Britain's divorce from the EU has immediate implications for English travelers -- the British pound has lost about 9.5% against the U.S. dollar and nearly 12% against the euro since the vote.

But investors are more worried about the sheer uncertainty the Brexit referendum has created. It's conceivable that the EU may have trouble keeping its remaining nations within the fold, as independence-minded political parties in various countries study the Brexit campaign and eye similar referendums.

Some economists believe the U.K. is now headed for a recession, and that further single-country exits would raise recession risks in Europe and beyond. At present, Royal Caribbean has some exposure to the potential for reduced consumer spending power in Europe. According to the company's latest annual report, cruise guests from Europe accounted for 28% of total passenger traffic in 2015. The majority of passengers, however, originated from North America, comprising 54% of the annual guest total. Guests from the Asia/Pacific region, which is by far the company's fastest-growing market, made up most of the balance of traffic, at 14%.

Whether European traffic origination gets hit or not, simple consumer cautiousness could negatively affect the cruise operator's results. For example, while passenger ticket sales typically make up the bulk of Royal Caribbean's revenue, a full 28% of total revenue in the company's first quarter was derived from onboard sales. Onboard spending by passengers brings additional margin to the income statement and often determines the ultimate profitability of a cruise operator's business quarter.

Investors in Royal Caribbean should keep an eye on macroeconomic developments this year, as customers may still board ships but spend less liberally on the seas. Shareholders should note that the Brexit vote occurred at the beginning of the lucrative summer season. The company is slated to report second-quarter 2016 earnings at the end of this month, and management will undoubtedly address any expected impacts on summer revenue during its quarterly conference call with analysts.