Please ensure Javascript is enabled for purposes of website accessibility
Log In Help Join The Motley Fool
Free Article Join Over 1 Million Premium Members And Get More In-Depth Stock Guidance and Research
By Dan Caplinger – Jul 11, 2016 at 10:08AM

Which of these transportation giants is the smarter pick right now?

Overnight delivery of just about anything you can imagine is something that people take for granted now, and the efforts of FedEx (FDX -1.98%) and United Parcel Service (UPS -1.43%) are largely responsible for making what was once a pipe dream into a reality. Both transportation companies have made it their business to ship whatever you want nearly wherever you want it to go, and they've continued to make strides toward getting it there whenever you want as well. The rise of e-commerce has been a shot in the arm to the industry, but the two companies also remain subject to cyclical trends in the business world as well. Let's take a closer look at FedEx and UPS, comparing them on a number of metrics to see which one looks more attractive right now.

FedEx and United Parcel Service have seen their stocks move in opposite directions over the past year. UPS is up 18% since July 2015, but FedEx has lost about 6% of its value over the same timeframe.

Looking at relative valuation, whether FedEx or UPS looks cheaper depends on what you think about their respective future prospects. When you focus solely on trailing earnings over the past 12 months, FedEx looks a lot more expensive, with a multiple of 24 compared to United Parcel's P/E of 20. However, when you incorporate expectations of future earnings, FedEx looks much more reasonable. Its forward earnings multiple is just 12, compared to nearly 18 for UPS. If you believe those future projections, then FedEx has an edge over United Parcel Service on valuation.

When it comes to dividends, United Parcel Service has a clear edge. The company weighs in with a dividend yield of almost 3%. By comparison, FedEx pays only a pittance, with its dividend yield amounting to just 0.8%. 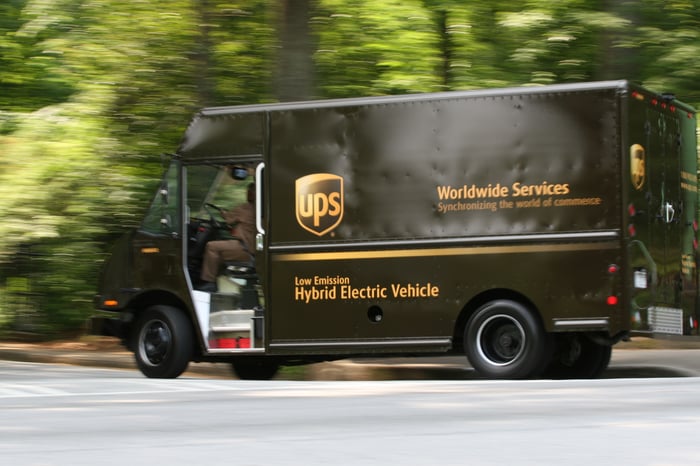 In part, that disparity stems from a difference in dividend philosophy between the two companies. FedEx pays out only about a quarter of its earnings to shareholders in regular dividend payments, choosing other uses for the rest of its capital. Also, it's only recently that FedEx took dividend growth particularly seriously, making just token penny-per-share increases in its quarterly dividend until 2014.

UPS, on the other hand, pays out slightly more than half of its earnings as dividends. It also has a better track record of dividend growth, increasing its quarterly payouts by 5% to 10% per year ever since the end of the financial crisis. Overall, United Parcel Service takes the edge over FedEx on the dividend front.

The most recent financial reports from FedEx and United Parcel Service show both the opportunities and the challenges that face the transportation industry. FedEx celebrated a strong finish to its fiscal year in June, reporting a roughly 6% rise in revenue that lifted adjusted earnings per share by more than a fifth. The most important achievement for the company was its acquisition of TNT Express, which boosted FedEx's presence in Europe and elsewhere internationally. The ground segment performed the best, but the express and freight divisions also carried their weight, marking a big win for the company overall. Pension-related expenses have hit FedEx's GAAP earnings relatively hard, but the continuing integration of TNT could lead to further growth for the company.

For UPS, e-commerce has been the key to the company's success lately. In its first-quarter results, United Parcel Service saw revenue climb 3%, boosting operating margin by about 9%. The domestic package delivery segment benefited from the rise of business-to-consumer shipments, and international package shipments showed positive impacts from soaring operating income despite a tick downward in revenue. However, the supply chain and freight segments suffered a slight drop in operating income, due largely to weakness in industrial production. UPS has worked hard to boost efficiency, and that has helped the company maintain its optimistic guidance for 2016 despite signs of global weakening. As long as it can capitalize on shoppers seeking to buy goods and get them quickly, United Parcel Service has room for further growth.

Overall, both FedEx and UPS have opportunities and risks, and it's hard to pick an obvious favorite. For dividend investors who need income now, UPS is the clear choice. However, for those who believe that future growth could come from a variety of different sources, FedEx's cheaper forward valuation makes it look more attractive.