Apple (NASDAQ:AAPL) has accumulated a massive cash hoard. When including cash and equivalents and short- and long-term investments on its balance sheet, the iPhone maker is sitting on $233 billion in cash and liquid assets. Even after subtracting $71.9 billion in debt, Apple still has $161.1 billion in net cash.

With lots of cash on Apple's balance sheet, and producing recurrent sums of money year after year, investors need to make sure Apple is putting that money to good use. Let's look at a few ways in which Apple can use its cash and what they mean for investors in Apple stock.

One of the main ways Apple is using its cash is rewarding investors with growing dividends and buybacks over time. Since the inception of its capital-return program in August 2012 through March 2016, Apple has returned over $163 billion to shareholders -- $117 billion in share repurchases and $46 billion in dividends.

Share buybacks reduce the amount of shares outstanding, allowing Apple to increase earnings per share at a faster rate than total company-level net income growth. When a company buys its own shares, it's basically investing in itself. If the value of those shares increases in the future, then that capital is being smartly allocated. Given that Apple is prioritizing buybacks over dividends can be interpreted as a sign that management considers that the stock offers attractive upside potential going forward.

Buybacks are also more flexible than dividends. Investors expect dividend payments to be sustained and even increased over time, but when it comes to repurchases, a company has more flexibility to accelerate or slow down the amount of capital allocated to buybacks depending on the specific circumstances.

If the stock looks particularly undervalued or if the company is accumulating too much cash, then buybacks can be increased. On the other hand, when the stock is richly valued or the business needs to retain more financial resources, then management can reduce buybacks.

Apple has regularly increased its dividends since 2013, including a 10% dividend raise announced in the last earnings release. Management is committed to raising dividends on an annual basis, and the dividend payout ratio is comfortably low, in the neighborhood of 28% versus earnings estimates for the current fiscal year. So, Apple has ample room to continue raising dividends in the future. 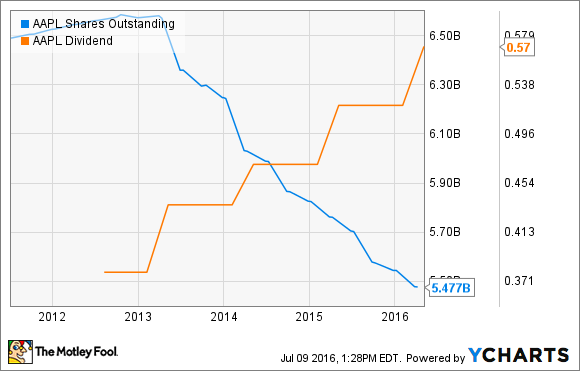 In addition to distributing cash to investors via dividends and buybacks, Apple can retain a higher share of its cash flows to invest in areas such as research and development or acquisitions. Allocating more money to these areas doesn't necessarily guarantee that this money will be well spent, but it's certainly a possibility worth considering when it comes to evaluating the possible uses of the company´s resources.

The smartphone industry is maturing -- a development that's hurting revenue growth in Apple's important iPhone segment. Apple will need to rely on innovation to accelerate growth in the future, and the company is investing less money than its peers are in research and development.

Research and development expenses amount to nearly 4% of revenue for Apple. For reference, rival Microsoft (NASDAQ:MSFT) invests nearly 13.7% of revenue in R&D, while Alphabet (NASDAQ:GOOG) (NASDAQ:GOOGL) allocates 16.5% of revenue.

Spending more money in R&D doesn't necessarily mean more innovating power, though. The company's vision and culture can be much more important than money when it comes to successful innovation. In the words of Steve Jobs himself, during an interview with Fortune in 1998:

Innovation has nothing to do with how many R&D dollars you have. When Apple came up with the Mac, IBM was spending at least 100 times more on R&D. It's not about money. It's about the people you have, how you're led, and how much you get it.

Apple is also different from most of its competitors, in that it focuses on a few projects with big potential, while other tech companies typically diversify their R&D spending on a wider amount of projects. Apple puts quality over quantity when selecting projects for R&D spending, and that's one of the main reasons the company spends less money than its peers in this area.

The same goes for growth via acquisitions. Apple doesn't typically make big purchases. The company is more likely to buy smaller businesses with a particularly attractive technology or strategic asset that it can incorporate into its own products. If history is any valid guide, Apple won't be spending big sums of money -- at least in relative terms -- on acquisitions anytime soon.

Nevertheless, even if Apple doesn't typically invest lots of money in R&D or acquisitions, it's good to know that the company has the financial resources to do so in case it needs to invest more money for growth in the future.

Investors in Apple stock have strong reasons to expect sustained share buybacks and growing dividends from the company over the coming years, and this can be a powerful return driver in the long term. When it comes to reinvesting for growth, Apple will not simply throw more money at R&D or acquisitions to accelerate sales, this will depend on the specific opportunities the company can find down the road. Still, having enough money to invest in all kinds of growth opportunities is certainly a key strategic advantage in the always dynamic tech industry.