Is Apple ignoring the most obvious streaming music purchase of all?

Apple (AAPL 0.19%) could soon buy Tidal, a music streaming service owned by Jay Z, according to The Wall Street Journal. Jay Z purchased the service from Swedish company Aspiro for $56 million last March. To attract musicians to the platform, he gave 19 artists small stakes in the company, and backed each artist with millions of dollars in marketing. The service now hosts exclusive songs from Kanye West, Rihanna, Prince, and Jay Z's wife, Beyonce, along with a catalog of 40 million songs.

It's unclear how much Apple is willing to pay for Tidal, but the company has 4.2 million paid subscribers who pay monthly subscription fees ($10 of standard quality sound and $20 for high-fidelity sound), which could generate between $504 million and $1 billion in annual revenue. By comparison, Beats Electronics generated $1.5 billion in revenue in 2013, before Apple acquired it for $3 billion the following year. Apple shut down Beats Music last November and integrated its user base into Apple Music. If Apple acquires Tidal, it will likely do the same thing to strengthen its flagship streaming music platform, which currently has a catalog of over 30 million songs.

Last month, Apple claimed that Apple Music had 15 million subscribers paying monthly membership fees ($10 for individuals and $15 for families). However, the service is still dwarfed by market leader Spotify, which had 89 million listeners (28 million of which were paid subscribers) at the end of 2015.

Therefore, many analysts have wondered why Apple doesn't simply buy Pandora (P), which finished last quarter with 79.4 million active listeners, to catch up to Spotify. Pandora's enterprise value of $2.9 billion is certainly pocket change for Apple, but I don't think the tech giant will ever buy Pandora for a few simple reasons.

Apple has made Apple Music a subscription-based service, because subscription revenues are much higher and more predictable than ad-based revenue.

Apple Music, Beats Music, Tidal, and Spotify are all subscription-based services, but Pandora is mainly an ad-based platform. Last year, 80% of Pandora's revenue came from advertising, 19% came from subscriptions, the rest came from ticket sales. Spotify, which generates about 90% of its sales from subscriptions, finished last year with nearly $2.2 billion in revenue. In other words, Spotify generated 87% more revenue than Pandora in fiscal 2015 despite having only 12% more active listeners.

Generating more revenue per active listener is critical for streaming music companies, since royalty fees gobble up most of their revenues. That's why neither Spotify nor Pandora is profitable, and their losses are widening every year. Spotify posted a net loss of 173.1 million euros ($191 million) in 2015, while Pandora posted a net loss of $170 million. 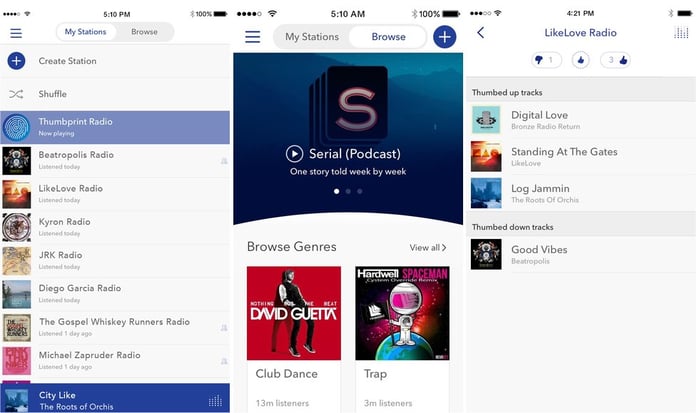 It might seem odd for Apple to enter such an unprofitable market, but the key difference between Apple Music and Spotify is its lack of a permanently free tier. Since Apple doesn't broadcast free songs to millions of users and try to cover those royalties with ad revenue, its streaming business mainly consists of balancing royalties and streaming expenses against subscriber fees. Apple also doesn't need Apple Music to be highly profitable -- it just needs it to expand its digital ecosystem, offset waning iTunes digital downloads, and boost the appeal of its higher-margin iOS devices.

Tidal brings more talent and connections to the table

By buying companies like Beats and Tidal, Apple gains deeper relationships with influential artists like Dr. Dre, Trent Reznor, and Jay Z. Trent Reznor reportedly played a major role in redesigning Beats Music before it was integrated into Apple Music. Jay Z could do the same by integrating Tidal's catalog of exclusive songs and partnerships with top artists into Apple Music. Apple, in turn, could offer artists big in-store and digital promotions for their new albums, as it did with Taylor Swift's 1989 late last year.

There's no guarantee that Tidal's artists will stay if it's acquired by Apple. However, Tidal reportedly pays singers, songwriters, and producers the highest royalties of any music streaming service. Unless Apple dramatically reduces that percentage, its doubtful that most artists will pull their songs.

Pandora notably lacks that star power and often tries to lower its own royalty payments. Back in 2014, Pandora signed a deal with the indie label collective Merlin in a push to lower the Copyright Royalty Board's (CRB) benchmark rates for music licensing fees. Earlier this year, Merlin protested that royalty-lowering move and claimed that the CRB "fundamentally misread the context" of the agreement. If Apple buys Pandora, it would inherit this battle, which could tarnish its reputation among Apple Music artists.

Sorry, Pandora, you're on your own

Pandora is currently struggling with sluggish listener growth, widening losses, and the abrupt departure of its longtime CEO. The stock's 12% decline over the past 12 months indicates that investors aren't confident in its future prospects, and Apple probably doesn't believe that Pandora's ad-heavy business can be properly balanced. Therefore, I believe that Apple would make the right play by buying Tidal and that Pandora won't likely be acquired in the near future.