Big dividends can be earned from these paint, pipeline, and telecom stocks.

Too often investors are looking for investments that wow. However, some of the best stocks for the long haul are pretty bland. What makes these stocks such solid investments is that in between the yawns investors can collect a pretty eye-popping stream of dividend income.

Neha Chamaria: You may walk into a paint store and fill your cart with SuperPaint cans to give your home a makeover, but chances are, you may not consider investing in the company that manufactures them. Buying a paint and coatings stock like Sherwin-Williams (SHW -0.92%) sounds boring, after all. However, boring can sometimes generate great returns.

Sherwin-Williams' business depends a great deal on the health of the housing market, but even the mortgage crisis couldn't deter it from increasing its dividends: Sherwin-Williams is a dividend aristocrat, having raised its dividends every year since 1979. The paint specialist has gotten more aggressive in recent years, more than doubling its annual dividend since 2011. The chart below reflects its quarterly dividend increases. 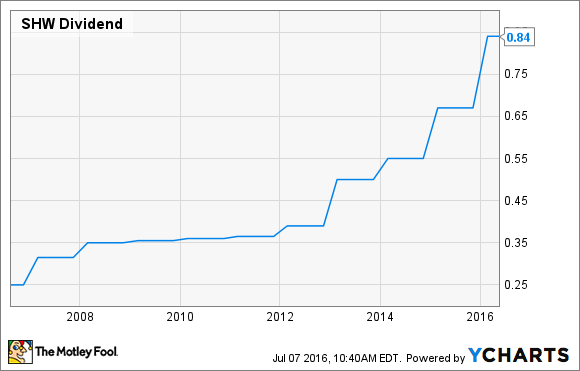 Those dividends have ample room to grow given Sherwin-Williams' conservative payout ratio and expanding profits: It paid out only a quarter of its net income and 40% of its free cash flow in dividends last year. Better yet, Sherwin-Williams has consistently generated greater FCF than net income in recent years -- something not many companies can boast of. Meanwhile, its sales and earnings per share hit record highs in 2015.

Sherwin-Williams' impending acquisition of Valspar (VAL), expected to close by March 2017, could be a game changer. The merger, if through, will topple PPG Industries and make Sherwin-Williams the largest company in the industry. The deal will also expand Sherwin-Williams' global footprint substantially -- it currently derives more than 80% of its sales from the U.S. -- while being immediately accretive to earnings. Given the prospects, investors can safely expect higher dividends for years to come.

Steve Symington: Verizon Communications (VZ 0.76%) may not be the most exciting stock you'll ever own. But with plenty of growth drivers in place and healthy cash flows (at 8% free cash flow margin) to give it room to increase its stable 4% dividend (with a roughly 50% payout ratio) down the road, the $224 billion telecommunications giant is a great option for long-term investors seeking relative security in the stock market.

To be fair, growth at Verizon's wireline business continues to slow, with segment revenue last quarter declining 1.9% year over year despite a 5% growth in FiOS revenue after adding 98,000 net new FiOS internet and 36,000 FiOS video customers (down from 133,000 and 90,000, respectively, in last year's first quarter). Still, Verizon continues to drive wireline expenses lower and improve profitability for the segment: Operating margin rose year over year last quarter from 4.3% to 6.3%, and EBITIDA margin climbed from 22.7% to 23.4%.

What's more, despite steep competition in the space, Verizon added an impressive 640,000 new postpaid wireless subscribers last quarter, including over half a million new tablet subscriptions as connected devices continue to become more ubiquitous. That brought its total retail connections to 112.6 million, good for a modest 3.7% year-over-year growth.

Meanwhile, Verizon expects its 5G network -- which should be around 10 times faster than current 4G connections -- to be ready around 2020, which should ensure the company maintains relatively low churn as it keeps happy its massive base of data-hungry customers. Assuming all goes as planned, that's great news, considering Verizon's mobile business generates around 70% of total revenue and virtually all its operating profit. That's also not to mention future contributions from Verizon's more recent Internet of Things-centric investments, including a deal announced last month to acquire connected vehicle telematics company Telogis.

All in all, while I wouldn't expect any massive moves either up or down, I think Verizon is set to continue achieving market-beating gains for patient investors going forward.

Matt DiLallo:  Over the past year, Enterprise Products Partners (EPD -1.49%) pulled in $5.3 billion in profits by operating pipelines, processing plants, and related energy infrastructure assets. These assets might not be all that exciting to talk about, but they are very effective at generating steady cash flow. Further, Enterprise has a knack for building and buying additional assets to grow its income stream. The results have been a beauty to behold, with the company increasing its payout for 48 consecutive quarters: 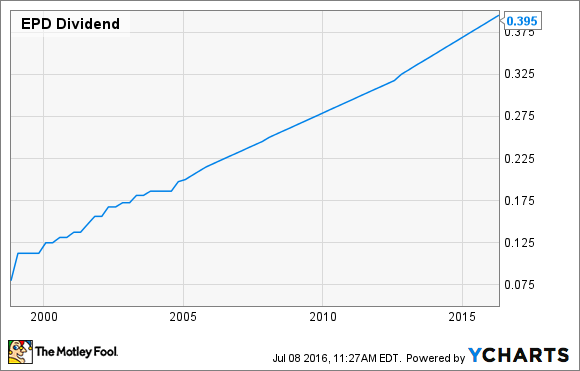 Enterprise is in the process of constructing another $6.5 billion in assets, which will support its ability to grow its payout through at least 2018. Further, with an excellent balance sheet and a healthy distribution coverage ratio (a measure of a master limited partnership's ability to meet its debt obligations), the company has the capacity to continue expanding its asset base by sanctioning additional projects and making targeted acquisitions. Those new additions will provide the company with the fuel it needs to drive its payout even higher.

While the company's pipelines and processing plants might inspire a few yawns, the income streams they produce for investors are very attractive.

Matt DiLallo owns shares of Enterprise Products Partners and Verizon Communications. Neha Chamaria has no position in any stocks mentioned. Steve Symington has no position in any stocks mentioned. The Motley Fool owns shares of and recommends Verizon Communications. The Motley Fool recommends Enterprise Products Partners and Sherwin-Williams. We Fools may not all hold the same opinions, but we all believe that considering a diverse range of insights makes us better investors. The Motley Fool has a disclosure policy.