Please ensure Javascript is enabled for purposes of website accessibility
Log In Help Join The Motley Fool
Free Article Join Over 1 Million Premium Members And Get More In-Depth Stock Guidance and Research
By Tyler Crowe - Jul 12, 2016 at 9:13AM

Nothing makes a value investor smile more than a great company's stock trading at a historically low valuation. Nothing makes a dividend investor smile more than buying shares of a great company with a track record of growing its payout at abnormally high yields. When those two things come together in the same stock, it can make for a wonderful wealth-building stock. Today, three companies really fit the description of steady dividend payers with oddly low stock valuations: integrated oil and gas companies Chevron (CVX 3.06%) and Total SA (TTE 1.57%) and agriculture giant Mosaic (MOS 1.27%). Let's take a look at why shares of these companies are so remarkaby cheap and why it may be a good time to pick up shares.

Big oil companies have suffered a bit in the recent energy industry downturn. Most of them got caught with their pants down when oil prices declined and they were still spending big bucks on major development projects that weren't yet complete. Probably the worst offender in this category was Chevron. In 2014, when oil was still comfortably in the $100-a-barrel range, Chevron's management said that more than 40% of its employed capital was in not-yet-producing development projects. A huge chunk of that was tied up in its Gorgon and Wheatstone liquefied natural gas projects, in Australia. Fast forward to today, with oil in the $50-a-barrel range, and those two projects are still not on line.

Having to shell out this much cash to complete projects when oil is so cheap has made some on Wall Street nervous. Some think that Chevron may be a little over its head and it's possible that a dividend cut is coming. That fear has led the company's shares to a price to tangible book value of 1.35. While that isn't the lowest it's been this year, it is still well below the average valuation Chevron has held for the past 20 years. 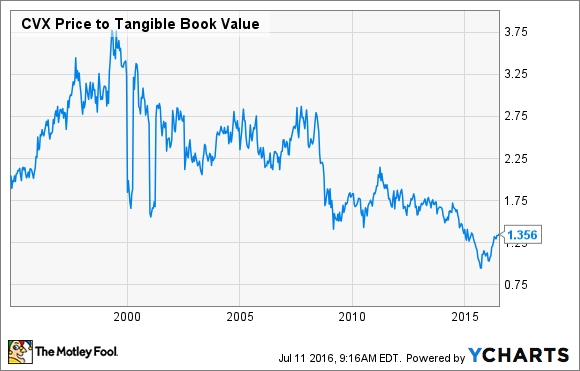 There is plenty of room to argue what will happen with Chevron in 2016 and 2017. The company needs to fund the last remaining parts of these projects while finding a way back to paying for its capital spending and dividend with cash flow from operations. Keep in mind, though, that we are at or near the bottom of the cycle for the energy industry, and Chevron has a reputation for being a dividend aristocrat that has kept up consistent dividend increases for more than 25 years. If you are willing to ride out this rough patch and cash in the 4% dividend yield check each quarter while you wait, Chevron could be a pretty compelling investment.

Like the energy world, the agricultural and fertilizer industry has been grappling with a spate of oversupply that has led to a decline in prices. The difference between energy and fertilizer is that most fertilizers aren't produced from assets that naturally decline like oil and gas wells. That's why the slide in fertilizer has been a several-year event that has sent shares of Mosaic tumbling more than 63% over the past five years. Today, the company's shares trade at par to the company's tangible book value, which basically says the company's underlying assets are only worth their current liquidation value on the balance sheet. Seems a bit harsh for one of the world's largest fertilizer manufacturers.

There are a lot of reasons to think that fertilizer production will struggle over the next couple of years. It's hard to root out oversupply for a product that carries such importance to our basic need of food. However, it's also equally true that the growing need for food means that long-term demand for fertilizer will be there, and companies that supply it will be in great need over time. Another reason that the situation at Mosaic may not be as bad as advertised is that the company has remained profitable both on an income and cash flow basis over the past few years. So if the company can get by at today's prices, it should be able to ride out this long lull in fertilizer prices. With a dividend yield of 4.3%, Mosaic will even pay you for your patience.

On the same rough waters, but not in the same boat

Like Chevron, Total SA has been hammered by the decline in oil prices and worries that its cash flow capabilities are not keeping up with its spending habits and dividend payments. Unlike Chevron, though, the company has done a much better job of wrapping up work on some of its largest development projects. In 2015 alone, the company increased its total production by 9%. By big-oil standards, that is moving the needle in a big way. In fact, that large increase in production was part of the reason that Total's net income declined a much more modest 18% while Chevron and the rest of the integrated oil and gas companies saw net income decline more than 40%.

Even though Total has been able to show that it's in a much better place than many of its peers in terms of profitability and has drastically reduced its spending needs for the next several years, Wall Street is still treating this stock with kid gloves. Shares still trade at 1.3 times tangible book value and carry a dividend yield of a whopping 5.75%. It's not the absolute lowest point for shares of Total, but it is still well below what it has historically traded at over the past 20 years.

The most promising aspect of Total as an investment over other integrated oil and gas companies is that it is significantly lowering its cost structure without eating into future gains. Management estimates that it will be able to grow production by 4% annually through 2019, and its current cash breakeven oil price is $40 a barrel. If that is the case, the company should be set up extremely well for the future, and in that scenario Total's stock looks almost absurdly cheap.