The concept of virtual reality headsets is hardly a new one; they've popped up in various forms over the years, but have always ultimately failed to gain traction. Over the last several years, the concept of VR has, once again, become quite popular. Whether virtual reality sticks this time or ultimately winds up being another fad is anyone's guess. 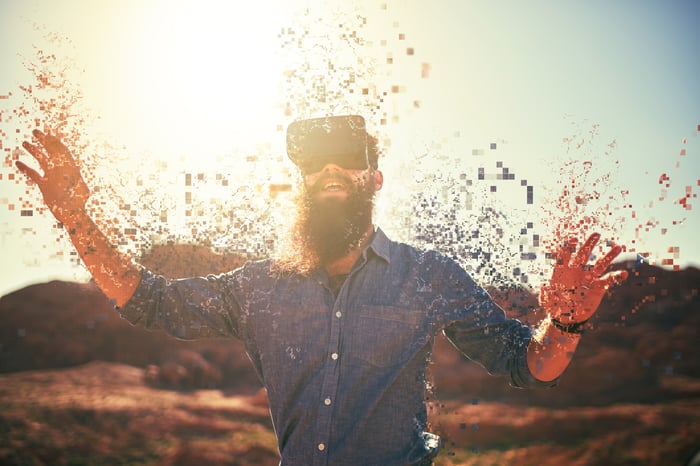 However, for those interested in companies (and their stocks) that could benefit if this round of virtual reality hits it big, here are three that spring to mind.

Right now there are two major VR platforms that seem to have people's attention: Rift from Facebook-owned (NASDAQ:FB) Oculus and the Vive from struggling smartphone maker HTC (NASDAQOTH: HTCCY).

If Oculus were a stand-alone publicly traded company, it might be an interesting way to play a potential VR boom. However, it's owned by Facebook, already a large, successful company trading at a lofty valuation. Even if the Oculus Rift is successful (by some reasonable definition of success), it's not clear that this will mean much to Facebook's top and bottom lines.

HTC, on the other hand, seems to be a much more interesting way to play a potential boom in VR headset sales. In addition to what seem to be quite a few voices in the tech press claiming that the HTC Vive is a superior platform to the Oculus Rift (though there are some that say the opposite), HTC's business could be positively, and meaningfully, impacted if VR takes off since its market capitalization is roughly equivalent to $2.53 billion (remember that Facebook bought Oculus for $2 billion).

That said, it's important to keep in mind that betting on the proverbial little guy is inherently riskier; Oculus, backed by Facebook, is likely to be able to outspend HTC on hardware development, software ecosystem development, and marketing.

Since headsets like the HTC Vive and the Oculus Rift require very high performance graphics cards in order to play virtual reality games at acceptable performance levels, it would seem that this plays right into the graphics specialist's strengths.

Looking to get in on the action in virtual reality, console maker Sony (NYSE:SONY) is planning to launch its own VR headset, known as the PlayStation VR, later this year. Sony has the advantage of being able to market its new headset to a fairly large PlayStation 4 installed base. It also controls both the hardware and software ecosystem around PlayStation, which could allow the company, and developers for the PlayStation 4 platform, to deliver relatively good, polished experiences.

If PlayStation VR is well received, Sony could benefit in three ways. First, the appeal of PlayStation VR could draw gamers to its platform over competing game consoles, driving console unit sales.