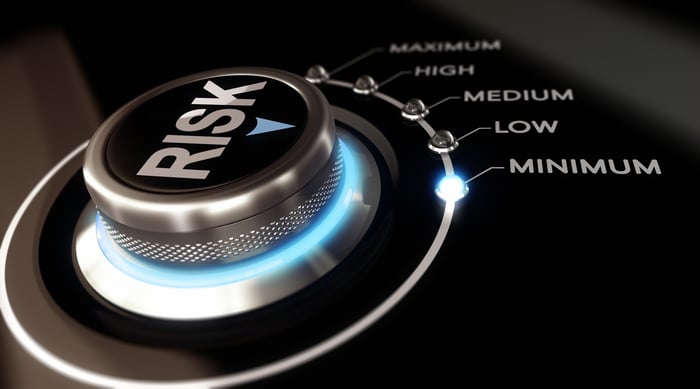 Stocks are generally considered riskier and more volatile than other asset classes like bonds. However, that doesn't mean investors need to assume excessive risk to invest in equities. Far from it: Rock-solid dividend stocks such as Coca-Cola (KO 0.88%), Johnson & Johnson (JNJ 0.08%), and The Clorox Company (CLX 0.55%) offer attractive long-term potential while keeping risks under control.

Coca-Cola is the global market leader in non-alcoholic drinks. The company owns 20 different brands making over $1 billion each in annual revenue globally. The list includes not only traditional soda brands such as Coca-Cola itself, Diet Coke, Fanta, and Sprite, but also healthier alternatives in water, juice, and tea -- for example, Dasani, Fuze Tea, and Powerade.

Coca-Cola is refranchising its bottling operations around the world to increase profitability, and the company is planning to achieve $600 million in annual cost savings through productivity enhancements. Management targets volume growth in the range of 3% to 4% annually through 2020, while earnings per share are expected to grow in the high single digits over that period.

Consumers around the world are cutting back on soda consumption because of growing concerns about the impact of sugar and other health considerations. In this context, per capita soda consumption in the U.S. reached its lowest levels since 1985 last year.

However, Coca-Cola is actively investing in healthier products to adapt to changing consumer demand. In addition to being the market leader in sparkling beverages, the company is also the top player in still drinks around the world. There is one big difference between the two markets, though, in that Coca-Cola owns 50% of value share in sparkling, but a much smaller 15% of the market in stills. Growing demand for still drinks, in combination with opportunities for market share gains in the category, bode well for Coca-Cola in the years ahead.

The company has an impressive trajectory of dividend growth, having increased its dividend payments for 54 consecutive years. After raising dividends by 6% in 2016, Coca-Cola stock is paying a 3.1% yield.

What the doctor ordered

Incorporated in 1887, Johnson & Johnson today employs nearly 126,500 people in 60 countries, and the business is expected to produce $71.76 billion in revenue during 2016. With a leading presence in industries such as pharmaceuticals, medical devices and diagnostics, and consumer healthcare products, Johnson & Johnson is the largest and most diverse healthcare company in the world.

Scale advantages and brand differentiation allow Johnson & Johnson to generate substantial profitability. The company produces operating profit margins in the neighborhood of 26% of revenue on an annual basis. For reference, the average company in the industry has an operating margin around 19% of sales, according to data from Morningstar.

Management is committed to distributing nearly 50% of free cash flow to investors via dividends on a long-term basis, and Johnson & Johnson has increased its dividends for 54 consecutive years. In April, Johnson & Johnson announced its most recent dividend increase, raising payments by 6.7%.

At current prices, Johnson & Johnson stock is paying a 2.6% dividend yield, and the dividend payout ratio is comfortably low -- in the neighborhood of 48%. Johnson & Johnson therefore has considerable room to continue raising dividends over the years ahead.

The Clorox Company is a market leader in several consumer staples categories, such as cleaning, household, and lifestyle products. Over 80% of the company's sales come from brands occupying the first or second market share position in their categories. Clorox operates in a fragmented industry where it has considerable size advantages versus the competition. According to management, the company is three times as big as its closest branded competitor.

The company sells mostly everyday necessities as opposed to discretionary items, an advantage that makes revenue quite stable through the ups and downs in the economy. The industry isn't particularly exciting and dynamic, but Clorox has still produced impressive returns for investors over time. On a total return basis, meaning dividends plus price appreciation, Clorox stock has downright crushed the S&P 500 Index over the long term. 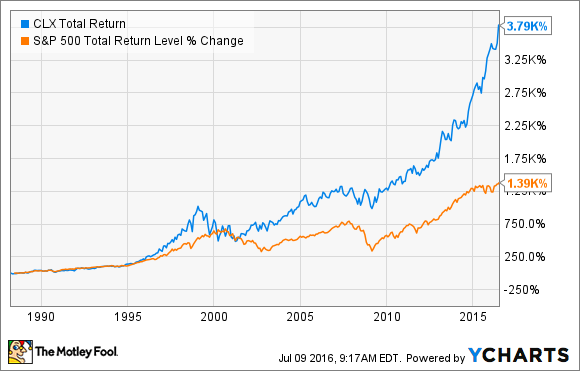 The company's 2020 strategy aims to deliver revenue growth of 3% to 5% annually, while expanding the EBIT margin (that's earnings before interest and taxes) by 25 to 50 basis points per year and retaining between 10% and 12% of sales as free cash flow. Innovation is a big part of that strategy. The company plans to generate 3 points of incremental growth via innovation annually.

The Clorox Company has increased dividends every year since 1977, including a 4% dividend increase announced in May. At current prices, the stock is yielding 2.3% in dividends.

Low-risk investing doesn't necessarily mean that you should avoid stocks altogether. Companies such as Coca-Cola, Johnson & Johnson, and The Clorox company are remarkably sound and dependable businesses, and they have rewarded investors with growing dividends in all kinds of economic scenarios over the long term. This speaks volumes about these companies and their ability to produce solid returns with modest risk for shareholders.