Berkshire Hathaway and PepsiCo are remarkably different companies, but they excel in areas such as fundamental quality and financial performance. 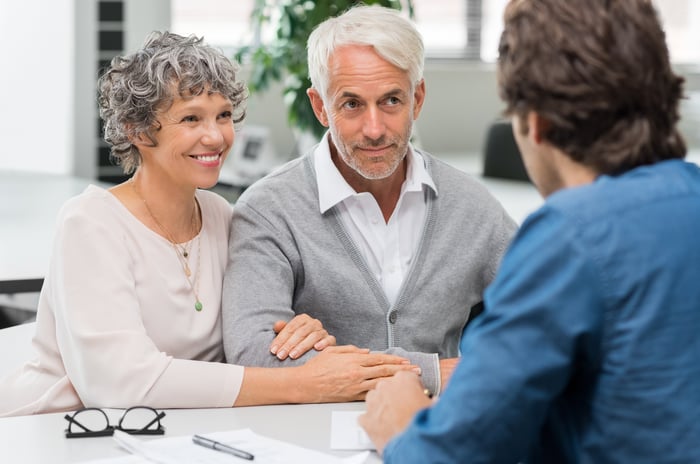 Investors in their 70s are typically retired, and in most cases, they gravitate toward companies with strong fundamentals that are producing dependable returns. The main idea is to keep risk under control, since you don't want the value of your portfolio to fluctuate too much when you are relying on it for your retirement needs. With this in mind, companies such as Berkshire Hathaway (BRK.A -1.82%) (BRK.B -1.76%) and PepsiCo (PEP -1.38%) are particularly strong candidates for investors in their 70s.

With an estimated net worth of nearly $67.6 billion, Warren Buffett is one of the most successful investors ever. The Oracle of Omaha has built his fortune by investing in a collection of high-quality businesses over the long term, and buying Berkshire Hathaway stock can be a simple and effective way to replicate Warren Buffett's investment strategy.

Berkshire Hathaway is a holding company that has operations in a wide variety of businesses, including insurance and reinsurance, financial services, railroads, energy, utilities, manufacturing, services, consumer, and retail. Diversification provides stability for the company as a whole: When one sector of the economy is lagging, better performance from other divisions can compensate.

Insurance companies receive the premiums up front and pay claims later, and sometimes these payments can stretch out over several decades. Warren Buffett refers to this money as "the float." Even if the float is not owned by Berkshire, the company can use it to invest for its own benefit over the long term, and this is a major return driver for investors. When considering both the benefits of investing the float money and the advantages of diversification, the whole is worth more than the sum of the parts when it comes to Berkshire Hathaway.

The company has produced impressive returns over the decades. From 1965 to 2015, Berkshire Hathaway has increased its book value per share at a compounded rate of 19.2% per year, which is almost double the annual return of 9.4% produced by the S&P 500 in the same period.

Berkshire has become a huge corporation with a market capitalization value of nearly $354.2 billion, which makes it the ninth-biggest company in the S&P 500, and returns tend to slow down as a company gains size over time. This means it doesn't make much sense to expect from Berkshire Hathaway the same kinds of returns the company produced when it was a smaller business, decades ago. On the other hand, when it comes to safety and reliability, Warren Buffett's investment holding doesn't leave much to be desired.

PepsiCo is a global market leader in nonalcoholic drinks and snacks. The company owns 22 different brands producing over $1 billion each in global revenue. This includes not only traditional names such as Pepsi and Lay's, but also products targeted toward health-conscious consumers, such as Tropicana, Quaker, and Gatorade, among several others.

The shift toward healthier nutrition is a major trend in the industry. Fortunately for investors in PepsiCo, the company is actively investing in this area. PepsiCo's "guilt-free" portfolio of products, which includes both naturally healthy categories and low-calorie versions of traditional products, currently accounts for 45% of the company's overall revenue base.

The company has also embarked in an ambitious program to increase profitability via productivity enhancements, and it has reduced annual expenses by $1 per year since 2012. During the first two quarters of 2016, PepsiCo increased its marketing and advertising expenses as a percentage of sales by 55 basis points, but the company still managed to increase profitability levels. Core gross profit margin is up by 100 basis points, and core operating margin expanded by 115 basis points versus the same period last year.

PepsiCo has an exceptional track record of dividend payments over the long term. The company has  paid uninterrupted dividends in every year since 1965, and it has accumulated 44 consecutive years of consistent dividend growth. It takes a particularly strong business to reward investors with growing cash distributions in all kinds of scenarios, which says a lot about PepsiCo and its fundamental quality.

Dividends also provide recurrent income from your portfolio, and this is typically much appreciated by investors in retirement. After raising dividends by 7% for 2016, PepsiCo stock is trading at a dividend yield of 2.8%. The yield is not particularly high in comparison to other dividends stocks in the market, but it's also not bad at all coming from such a strong business with a proven track-record of consistent dividend growth over the long term.

To wrap up, Berkshire Hathaway and PepsiCo operate in different industries, and they have their own weaknesses and strengths. On the other hand, they have two important characteristics in common: rock-solid fundamentals and impeccable financial performance. This makes them strong candidates for investors in their 70s, who typically look for quality and reliability in their investments.

Want to Beat Warren Buffett? Look at These 2 Hot Stocks
376%