With the fertilizer markets visibly under pressure, investors in Mosaic Company (MOS -0.40%) must be anxiously awaiting its next quarterly earnings release to get a clearer picture of where things are headed. But before the numbers hit the Street in a couple of weeks, there's something else you must do: Find out what Mosaic management said in its most recent conference call. Doing so could not only give you valuable insight into the company's strengths and weaknesses, but also help you gauge how things might have changed in recent months. Here are three quotes from Mosaic CEO James O'Rourke that you should know.

Plunging prices of potash and phosphate are largely to blame for the recent declines in Mosaic's and PotashCorp's (POT) profits. Both companies reported double-digit drops in their net incomes during the first quarter of FY 2016 and downgraded their sales guidance for the full year. O'Rourke, however, sounded optimistic during the earnings call:

We continue to expect a strong second half, with improving global demand for the remainder of 2016.

Mosaic is primarily betting on an uptick in demand from Brazil and India in a few months. That already appears to be playing out given the latest potash contracts from India. However, none of those contracts are with the U.S.-based producers. More importantly, India negotiated at decade-low potash prices. As Mosaic and PotashCorp are now largely price takers, they may have to relent under pressure and sell potash at prices that could wipe out any hopes of higher sales or profits in the second half.

How is Mosaic handling the downturn?

With challenges aplenty, Mosaic is aggressively tightening its purse strings. As O'Rourke pointed out:

[W]e are benefiting from our work to reduce expenses. Mosaic, today, is a low-cost producer and we are building on this competitive advantage.

Mosaic not only reduced its selling, general, and administrative expenses by 10% year over year in Q1, but also lowered its full-year SG&A guidance by $10 million at the midpoint of its previous forecast range of $350 million-$370 million. On the production side, Mosaic kept its potash costs flat and lowered its phosphate costs in Q1 despite a lower operating rate. 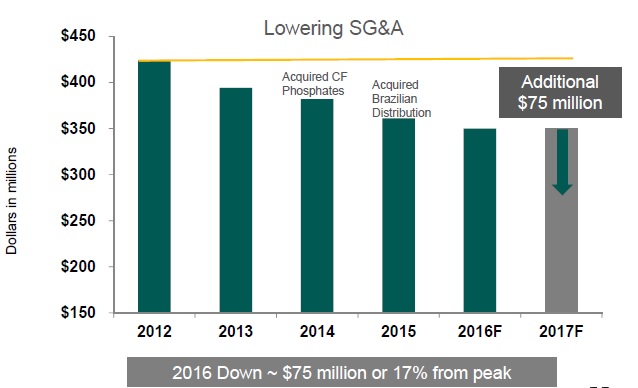 Given the increased uncertainty in potash markets, it's imperative for Mosaic to keep production costs as low as possible while finding ways to cut even further. Investors shouldn't miss the company's plans on this front in its second-quarter earnings call.

Big news could be on its way for Mosaic investors

[W]e're actively looking for opportunities to grow our company over the long term. And we believe this part of the cycle may be opening up opportunities for value that might not exist in other parts of the cycle.

This, by far, is O'Rourke's most important quote from the call. Mosaic is actively hunting for growth opportunities (read: acquisitions) in a down cycle -- a strategy that should work to its advantage in the long run. According to Reuters, Mosaic is eyeing Vale SA's (VALE 3.10%) fertilizer business in a bid to expand its footprint in the high-potential Latin American market. In fact, rumors of PotashCorp getting acquired are also doing the rounds, with Mosaic being touted as one of the contenders.

With prices at rock bottom, most fertilizer stocks have been crushed in the past year or so. For global giants like Mosaic and PotashCorp, this presents a great opportunity to scoop up rival assets while they're still cheap. With a comfortable interest coverage ratio of nine times and a debt-to-equity ratio of less than 40%, Mosaic has enough leeway to borrow to fund acquisitions, if required, without jeopardizing its interest or dividend payments.

Mosaic is smartly using a two-pronged strategy of controlling costs and expanding its footprint as it waits for the business cycle to turn. That should position the company for strong growth in the years to come.

Neha Chamaria has no position in any stocks mentioned. The Motley Fool owns shares of Companhia Vale. We Fools may not all hold the same opinions, but we all believe that considering a diverse range of insights makes us better investors. The Motley Fool has a disclosure policy.