It probably goes without saying, but not all energy stocks are alike. Take Apache (APA -1.50%) and Marathon Petroleum (MPC -0.21%). One explores for, and produces, oil and gas, while the other takes the oil and refines it into higher-valued petroleum products. Both can make good money doing this in boom times, though admittedly, Apache has had its struggles when times are tough. That said, the energy market showing some signs of life, which promises better days ahead for the sector. Given that the sector is showing renewed signs of life, which of these stocks is the better buy? We asked two of the Fool's best and brightest to weigh in.

The bull case for Marathon Petroleum

Tyler Crowe: Before I even begin, I should probably state my personal aversion to any oil and gas company that works exclusively on the exploration and production side of the business. There are plenty of great operators in the industry, but the idea that their profits make them wholly dependent on sustained oil prices just keeps me away. Refining margins will wax and wane like crude oil prices do, but not to the same degree. Also, those times of feast and famine are typically shorter, and won't go through the long-term lulls we're seeing with crude oil prices today. So even though I would rather own any refiner than an E&P company, why not pick a refiner that has done a great job generating high returns and has been very friendly to shareholders?

Marathon Petroleum is still a pretty young company, since it was spun off from Marathon Oil back in 2011. Since then, though, the company has been very good at using all the cash flow that used to be put back into exploration and production, and has opted to return very large chunks of it to shareholders. Over that five-year lifespan, the company has more than tripled its dividend payments and has bought back more than a quarter of its stock. 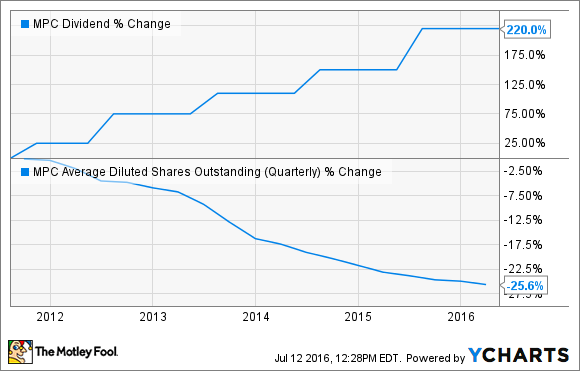 Some of the investments Marathon is making suggest that it should be able to keep this up; the largest of these is the combination of its two Texas City refineries. This $2 billion investment is expected to increase production at the combined facility by more than 100,000 barrels of refined product a day, increase its export capacity, and increase its annual EBITDA (earnings before interest, taxes, depreciation, and amortization) contribution by $680 million over the next six years. A big jump in profitability like that will help Marathon keep up this track record of dividend raises and share repurchases that reward shareholders so handsomely.

The bull case for Apache

Matt DiLallo: Unlike Tyler, I do not have an aversion to E&P companies. While that has hurt during the oil market downturn, I believe it will pay off as conditions begin to improve. That has certainly proven to be the case historically, with Apache, for example, significantly outperforming the market since the last oil market bust in the mid-1980s: 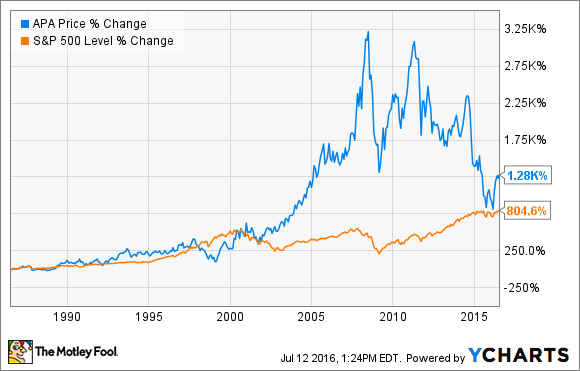 While the independent oil and gas producer has been much more volatile than the broader market over that period, it still vastly outperformed despite the current bear market in crude.

I think history has a good chance of repeating itself. Maybe not to such a degree as it has in the past, but Apache is right in the thick of the North American energy renaissance. The company currently controls a leading position in Texas' energy-rich Permian Basin and a compelling position in the emerging SCOOP play (South Central Oklahoma Oil Province). It has invested heavily during the downturn to gain a better understanding of these two plays, as well as push down its costs. As a result, it is primed to drive significant high-return production growth in the years ahead. Further, it is bolstered by an investment-grade balance sheet that is anchored by $1 billion in cash, with limited debt maturities through the end of this decade.

I believe that as the oil market returns to some sense of normalcy, Apache's combination of balance-sheet strength and a robust portfolio of growth opportunities puts it in the position to deliver top-tier returns.