Netflix is growing at full speed, but the stock is under selling pressure due to increasing competition. Is it time to buy Netflix stock at a discounted price?

Editor's note: Netflix made this list of top stocks to buy in 2017, too.

Investing in Netflix (NFLX 3.04%) stock is not for the faint of heart. The business is growing at full speed, but its stock has fallen by 28% from its highs of the last year due to news about growing competitive pressure from companies such as Amazon.com (AMZN -4.75%), Alphabet (GOOG -1.42%) (GOOGL -0.62%), and Time Warner (TWX). This raises an important question for investors: Should you buy Netflix stock now or is it better to stay away from the company based on increasing competition?

Netflix is proving to be enormously successful on a global scale: The company ended the first quarter of 2016 with 81.5 million total subscribers. Just three years ago, Netflix had only 36.3 million subscribers globally, so it has more than doubled its subscriber base since then. 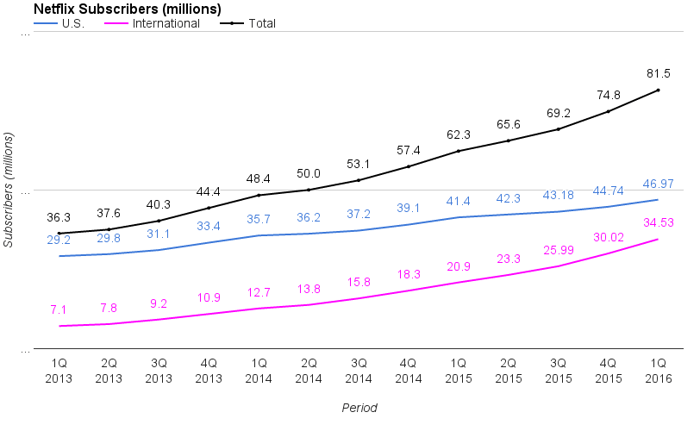 Importantly, everything indicates that international growth could be even stronger over the coming quarters. While Netflix entered 130 new countries in the first quarter of 2016, the service is still only offered in English and payment methods are limited to international credit cards in many of these markets. As the company adds more local languages, content, and payment options in these countries, accelerating international growth could be a powerful return driver for investors in Netflix stock.

The main reason for all the negativity currently surrounding Netflix stock is increasing competition. Amazon is building a huge library of video content, and it has recently announced that it will be offering online streaming as a stand-alone service. The retail giant also provides video streaming as part of its Amazon Prime program, which also includes free shipping and other benefits for members.

Amazon Prime has a monthly subscription cost of $10.99, if you pay by the month, and the stand-alone video service will costs $8.99 monthly, so Amazon Prime still looks like a better deal for consumers. If you buy a year of Amazon Prime, it's $99, or $8.25 per month. Nevertheless, the main point is that Amazon is increasing its presence in streaming, and the company is well-known for its relentless competitive drive.

Alphabet's Google launched its first paid YouTube subscription service called YouTube Red last fall, and the company is also reportedly working on a bundle of cable TV channels streamed over the Internet, which could be launched in 2017. According to Bloomberg, YouTube has been working on an online cable package since 2012, and it's now accelerating its expansion plans in this area.

Time Warner's HBO owns massively popular productions such as Game of Thrones, and its content differentiation is a key strategic asset in the industry. Time Warner is now offering HBO online via platforms like HBO GO and HBO NOW, and the company is capitalizing on its content quality to power those platforms. The new Game of Thrones after-show called After the Thrones is debuting first on HBO NOW and HBO GO, attracting Game of Thrones fans to those services.

Should I buy Netflix stock now?

Netflix is facing increasing competition from strong players such as Amazon, Alphabet, and HBO, and this is always an important risk to watch. On the other hand, staying away from Netflix stock simply because competition is increasing wouldn't really make much sense.

To begin with, the online TV business will most probably offer considerable room for growth over the years ahead, and market expansion should allow multiple players to grow and thrive over time. Just like many companies have enjoyed considerable success in the traditional TV industry, there is no reason to believe that online TV will be a zero-sum game in which one single winner takes all.

Besides, Netflix has the first-mover advantage and a remarkably powerful brand in the business. In addition, original content is a key differentiating factor for Netflix versus the competition, and the company is planning to release 600 hours of original programming in 2016.

Success attracts the competition, so it's only natural to see a growing number of players broadening their presence in streaming. However, that's no reason not to buy Netflix stock. On the contrary, as long as the company keeps delivering what customers want, chances are that the short-term decline in Netflix stock will turn out to be a buying opportunity for investors.