Some investors prefer the relative safety of a stable company while others are willing to accept more risk for higher upside. Which side of the fence you're on tends to be a key factor in determining whether Sunoco (NYSE:SUN) or ConocoPhillips (NYSE:COP) is the better buy. That is evident by our contributors' responses when asked to pick the better one of these two energy companies.

It's hard to argue with stability

Tyler Crowe: I have to admit right off the bat that I have an immediate aversion to companies that focus only on the exploration and production side of the oil and gas business. No matter how good of an operator a company is and how large its portfolio of future contracts are, its prospects will always be too tied to the ups and downs of commodity prices for my taste. While Sunoco only works in one part of the oil and gas value chain as well, it is a much more stable one that provides a little more certainty when it comes to future profits and cash flow over the long term.

What is surprising about the wholesale and retail marketing part of the oil and gas business is that, even though gas prices can fluctuate just as much as crude oil prices, the margins for those wholesale distributors and retailers remain remarkably constant.

Some may argue that the market for retail gas stations and wholesale distribution is a pretty saturated one. I can't argue with that. However, it is also very fragmented and the business is ripe for consolidation. More than 70% of all retail stations in the U.S. are mom-and-pop kind of enterprises that own no more than 50 retail stations. With that many stations out there, Sunoco has plenty of opportunity to make small bolt-on acquisitions and bolster its market share and cash flow over time.

The combination of a stable cash flow from steady wholesale and retail margins and the possibility for a decent amount of future growth from industry consolidation make Sunoco a slightly more favorable stock buy for me.

Matt DiLallo: I do not share Tyler's blanket aversion to E&P companies. That's because, over the long term, well-run oil stocks like ConocoPhillips tend to do very well. 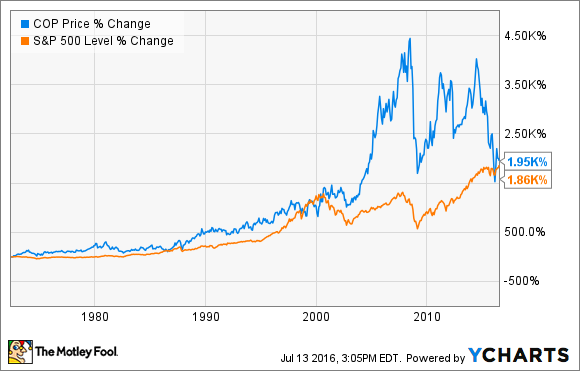 That opportunity for higher rewards is why I have not shied away from investing in the E&P space. That said, I have learned a couple of critical factors that I believe separate the winners from the losers.

The first one is that a strong balance sheet is a must. The best way to measure that, in my opinion, is a minimum credit rating in the high B range and ideally enough cash on hand to fund capex for at least several months. A fortress-like balance sheet like that gives an oil company the strength to hold up during times of trouble and provides it the financial capacity to invest in good times and bad.

The balance sheet is one area where ConocoPhillips shines. Not only has it maintained a solid investment grade credit rating -- its currently rated A/A-/Baa2 -- but it has a boatload of cash. 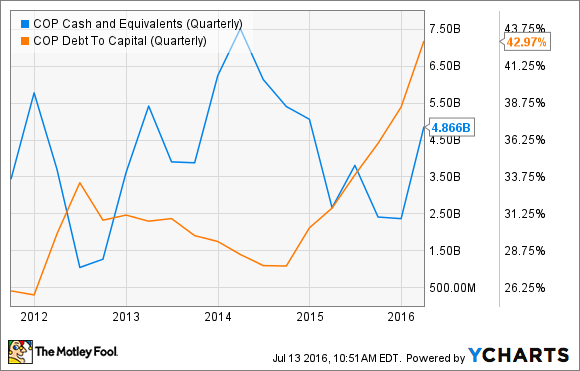 With a $5.7 billion capex budget this year, it has ample cash to meet its near-term needs. The only concern is the company's debt-to-cap ratio, which went from a comfortable sub-30% level to more than 40%. That said, its priority as prices improve is to pay down debt to bring its leverage back into more comfortable territory.

Another crucial factor is a diversified asset base. In my opinion, this diversification should be both global and by asset class. For example, one fundamental reason why ConocoPhillips has been able to maintain its production during the downturn despite a significant drop in capex spending is its base of assets that deliver low-decline production, including the Canadian oil sands, Australian LNG, and conventional resources offshore. These steady producers made it easier for the company to overcome higher-decline forms of production such as from unconventional shale resources.

While it will likely be a bumpy ride, I believe ConocoPhillips has the optimal combination of balance sheet strength and resource diversification to continue to deliver market-beating, long-term returns for investors.