Coal has been a problem for Teck Resources, but it's starting to look like that could change...

Teck Resources (TECK -1.08%) is a diversified Canadian miner. Like most miners, it's been suffering under the long downturn in commodity prices that started in 2011. It's been working to deal with the situation and it might finally be about to get some help from one of the world's most unloved commodities... coal.

Teck Resources isn't reliant on coal, it's just one part of the miner's business. But it does make up about a third of its cash operating profit. The rest comes, split pretty equally, from zinc and copper. Note, too, that Teck is currently working on an oil project that should reduce its reliance on coal even further. So coal is a big deal for Teck, but not the end all and be all.

The problem, of course, is that of all the commodities Teck mines out of the ground, coal is among the most unloved in the world. It's dirty and one of the worst offenders when it comes to greenhouse gas emissions. That said, there's two main uses for coal: making power and making steel. Teck focuses on steel making coal, called metallurgical coal. That's a good thing because met coal isn't facing the same displacement issues as thermal coal, which is used for power generation.

So, for Teck, the issue has been one of supply and demand, not clean power alternatives like solar and wind. In short, too much supply of met coal amid slower demand has led to a steep price drop in the met coal market. And that, in turn, has hit the miner's top and bottom lines.

During a mid-June presentation, however, Teck sounded a more positive note on the coal front. The company specifically noted that while price volatility remains an issue, the price of met coal was "well off the lows." It also highlighted improving demand in the market. Backing that up are mine closures within the industry and supply curtailments in China. 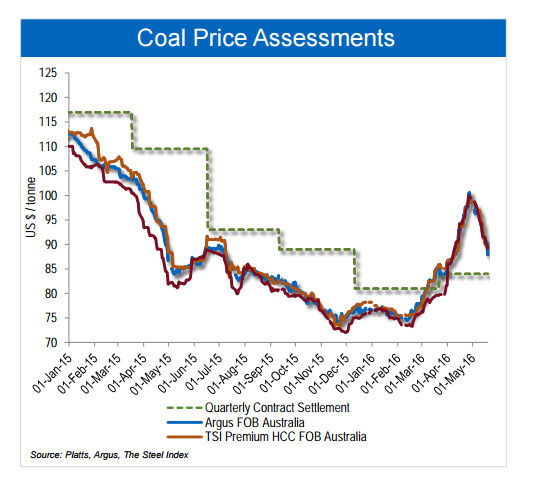 That's a decidedly more positive landscape for a commodity that's seen major players, such as Walter Energy, crater into bankruptcy. To add some color to that, in mid June spot prices for met coal were "well above" the contract price Teck had in place during the second quarter. Some of that comes from a price spike that has since begun to cool off, but industry watchers are expecting met coal prices to stabilize and slowly move higher over the next few years. Backing that is the belief that cost cutting has pretty much run its course so the recent lows are something of a floor under which pricing can't go... at least not for very long. Bankruptcies in the coal sector seem to support that view.

For Teck, an upturn in met coal prices would be welcome relief. And potentially in a big way. According to the company, assuming everything else is held constant (which won't happen, but bear with me), a dollar change in the price of coal per tonne would lead to an around $15 million increase in the company's gross profit.

Here's the thing, in the first quarter Teck's realized price for coal was $75 per tonne. Contract prices for the second quarter were $84 per tonne. When the company reports second quarter results coal will actually be a bright spot, at least sequentially. Gross profit in the coal business was just $7 million in the first quarter, down from around $110 million a year ago when contracted coal prices were $106 per tonne.

Back of the envelope math suggests that gross profit in the coal business will spike higher when Teck next reports earnings. It's unlikely that the full benefit the company talked about will be seen because of other factors, like currency fluctuations, but up is the direction to look for. And if the coal market is really finding a floor, as management seems to believe, this drag on Teck's results could suddenly become a tailwind.

Bottom line: If you've been avoiding Teck because of coal, you might want to rethink that mindset.