JPMorgan Chase and Yum! Brands broke away from broader indexes as stocks rose on Thursday.

Stocks ended in record territory for the third straight session as promising quarterly earnings reports from the banking sector stoked investor optimism. The Dow Jones Industrial Average (^DJI 2.68%) rose by 134 points on Thursday, or 0.7%, and the S&P 500 (^GSPC 3.06%) added 11 points, or 0.5%. 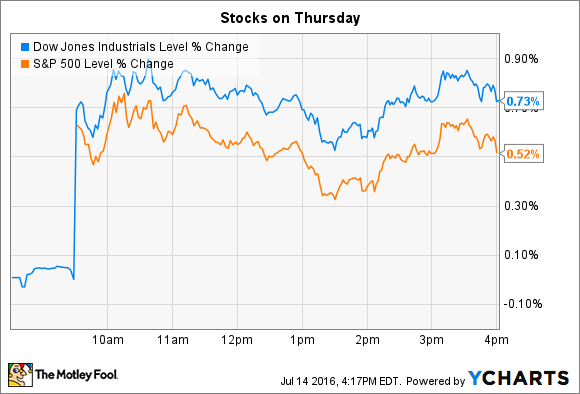 In economic news, producer prices rose 0.5% in June, according to the latest government data, which beat economists' expectations and was the biggest increase since December 2014. Yet overall inflation remains low, which should continue to provide flexibility for the Federal Reserve in weighing when to push through the next interest rate hike.

JPMorgan Chase shares rose on heavy trading volume after its second quarter earnings came in ahead of consensus estimates on both the top and bottom lines. The bank enjoyed broad business gains as customer deposits rose 10% to a record, and JPMorgan logged its best-ever credit card sales volume, merchant processing volume, and core load growth. 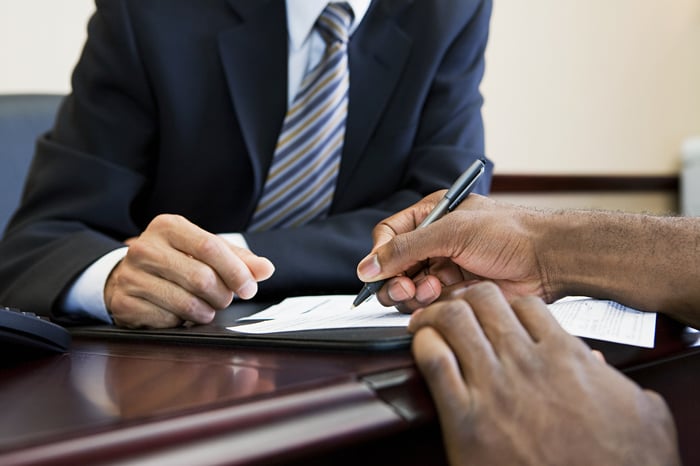 Its $1.55 per share in earnings easily beat the $1.43 analysts were expecting, which implies the nation's biggest banks had a better quarter than many investors feared. Sure enough, peer Goldman Sachs was the Dow's best performer for the day, rising with JPMorgan. Goldman will announce its second quarter results before the market opens on Tuesday, July 19, and Wall Street is forecasting $3.00 per share of profit, up from $1.98 per share last year.

Weakness in the oil and gas sector led JPMorgan to set aside more cash for loan losses. However, "outside of energy, both wholesale and consumer credit quality remained very good," CEO Jamie Dimon said in a press release.

Considering the volatility in global stock markets and the heavy drag from this low interest rate environment, it's good news that JPMorgan could improve its top line while protecting profits. Given that the banking sector had been one of the market's worst-performing segments, the negative sentiment set shares up for a jump on surprisingly strong earnings news like this. JPMorgan closed 1.5% higher for the day.

Yet both franchises produced higher operating profits. Improving results from China chipped in as well, and overall, Yum generated a 9% earnings improvement. The company's $0.75 per share of quarterly profit edged past consensus estimates by a penny.

CEO Greg Creed and his team raised the top end of their 2016 earnings forecast to 14% from 12%, implying plenty of confidence in their second-half plans around menu innovations and pricing for the KFC, Taco Bell, and Pizza hut brands. Besides those initiatives, shareholders can look forward to the spinoff of the China division occurring sometime around the end of October. Yum! said it plans to deliver plenty of cash back to investors both before and after that separation, which added to Thursday's bullish move for the stock.