The Brexit put an abrupt halt to Inovio's momentum in 2016.

What: Shares of the DNA vaccine-maker Inovio Pharmaceuticals (INO -5.98%) fell by more than 17% last month according to data from S&P Global Market Intelligence. Like most clinical-stage biotechs, Inovio's shares were hit particularly hard by the Brexit vote in June. 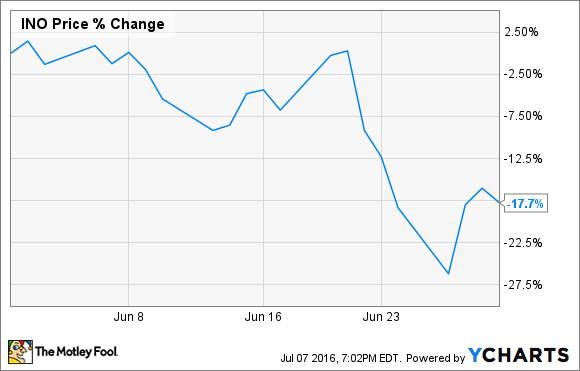 So what: Inovio's shares were gaining momentum this year primarily due to its collaboration with GeneOne Life Science on a DNA-based vaccine aimed at preventing infection from the Zika virus. Although this early-stage vaccine candidate is likely a few years away from regulatory approval, investors apparently saw a compelling opportunity -- presumably due to the sheer size of the latest Zika outbreak in Brazil. Whether or not this enthusiasm will return following the Brexit downer, though, remains to be seen.

Now what: Inovio's various forays into high profile infectious diseases like Ebola, Middle East Respiratory Syndrome, and Zika are probably best viewed as sideshows to the company's far more important ventures in cancer immunotherapy. The cold, hard truth is that by the time Inovio, or any other vaccine-maker for that matter, gains regulatory approval for one of these explosive infectious diseases, the outbreak that spurred the research in the first place will more than likely be contained, dampening the commercial potential.

Looking ahead, Inovio is set to launch a pivotal-stage trial for its experimental cervical dysplasia vaccine VGX-3100 later this year, and has already begun clinical trials with collaborator AstraZeneca (AZN 0.55%) for its next-generation anti-cancer vaccine INO-3112.

In my view, this partnership with Astra is going to be key going forward. One of the biggest knocks against Inovio is that the company works at a snail's pace when it comes to advancing its most promising clinical candidates. Astra, by contrast, has taken an extremely aggressive approach toward developing its immuno-oncology pipeline, meaning that it probably won't tolerate any lollygagging on Inovio's part. In short, investors are going to learn a lot about whether or not Inovio's DNA-based vaccine platform has a place in the anti-cancer therapy landscape through this collaboration. And that's a good thing.

Until then, though, I'd recommend sticking to the sidelines with this risky biotech.

Why Inovio Pharmaceuticals Is Gaining Today
363%