Please ensure Javascript is enabled for purposes of website accessibility
Log In Help Join The Motley Fool
Free Article Join Over 1 Million Premium Members And Get More In-Depth Stock Guidance and Research
By Ashraf Eassa – Jul 15, 2016 at 8:30AM

In a prior column, I highlighted an interesting mystery of sorts around graphics specialist NVIDIA's (NVDA -1.51%) next-generation graphics architecture, code-named Volta, after Italian scientist Alessandro Volta. In particular, I wondered about what chip-manufacturing technology NVIDIA would use for chips built on the Volta architecture.

Based on what NVIDIA's primary contract chip-manufacturing partner, TSMC (TSM -0.69%), should have in production in 2017, it seemed reasonable to expect that Volta-based chips would be built either on TSMC's 16-nanometer or on its 10-nanometer technology.

According to technology news website Fudzilla, Volta will be manufactured on TSMC's 16-nanometer process, rather than on its 10-nanometer process. Fudzilla also points out that Volta will use stacked DRAM, something that NVIDIA disclosed back in 2013, when it first began talking about Volta.

Performance-per-watt improvement on the same node

Fudzilla says, citing the same source that told the site that Volta would be built on 16-nanometer tech, that "performance per watt is expected to increase tremendously" for Volta. That expectation is in line with a slide that NVIDIA showed in early 2015. 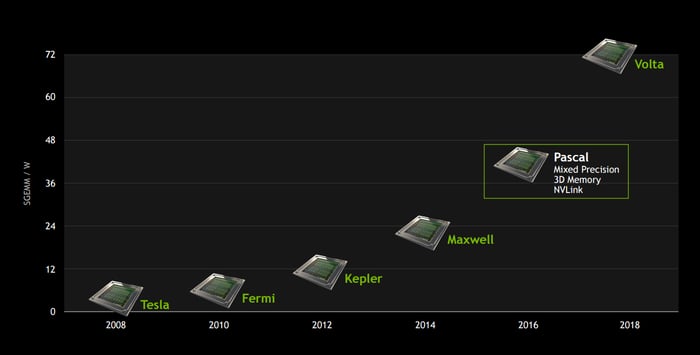 This claim passes a basic sanity check. NVIDIA was able to get an approximately twofold improvement in performance per watt in going from its Kepler architecture to its Maxwell architecture, even though both products were built on the same 28-nanometer manufacturing technology.

In fact, NVIDIA seems to have gotten a larger improvement in gaming performance per watt in going from Kepler to Maxwell than it did in going from Maxwell to Pascal (which involved a transition to a new manufacturing technology). This appears to suggest that NVIDIA has room to wring out additional performance per watt through architectural or design improvements on the 16-nanometer node.

When will we see Volta?

NVIDIA disclosed in late 2014 that a data-center-oriented chip based on the Volta architecture will power the Summit supercomputer at Oak Ridge National Laboratory. Summit is expected to be delivered to Oak Ridge in 2017, so the Volta chip that will power it -- known as GV100 -- will need to be ready for production deployments in 2017.

In light of the financial importance of gaming-oriented graphics processors to NVIDIA's business, I can't see the company prioritizing something like the GV100 at the expense of gaming-focused parts such as GV102 and GV104.

Remember that PC gamers are buyers that tend to be willing to pay quite handsomely for more performance. The sooner NVIDIA rolls out faster graphics processors, the more likely it is that gamers will find value in buying them.