Shares of Seadrill ltd. BP Prudhoe Bay Royalty Trust, and Western Refining are some of the worst-performing energy stocks of the past year, but that doesn't mean all three are bargain stocks,

There is a very large difference between a company that has seen its share price take a beating and one that's an actual bargain. In the energy industry today, there are a lot of cheap stocks, but there may not be a lot of bargains. A lack of future prospects, an overloaded balance sheet, or a stock that's simply too reliant on high oil prices to be successful are just a small example of reasons a stock may not be a bargain despite its cheap price. 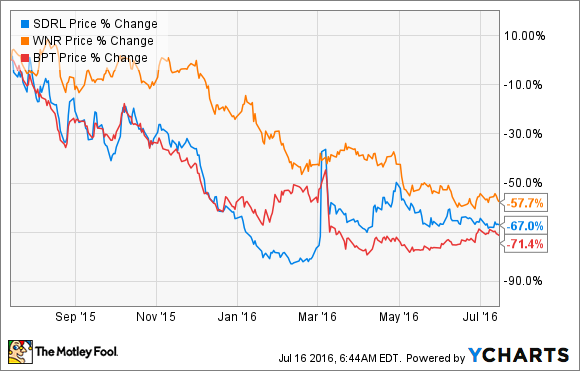 Can a rebound come quick enough?

The past year has not been kind to shares of Seadrill, but that's just a small slice of the slide that's been occurring for more than two years now, as oil prices tumbled and producers were losing their appetite for new offshore drilling projects. Over the past two years, shares of Seadrill have declined close to 92%.

Three big factors have weighed heavily on Seadrill. A lack of new contracts means that earnings and cash flow have been slowly dwindling, the company still has some large payments due for rigs under construction, and the company is saddled with a sizable debt load that will be difficult to pay off or refinance. What makes this such a challenging position is that, as an offshore rig owner, it operates in a part of the industry that's likely to be one of the last to rebound as oil prices rise.

For producers, offshore drilling is one of the higher-cost production forms and takes many years to develop, especially if drilling projects are in places where there isn't much existing infrastructure. Now that shale drilling is a cost-effective option, companies can bring new production on much more quickly with lower upfront costs. As long as oil prices remain low or modestly priced, many companies will opt for this kind of production instead of renting a Seadrill rig to drill offshore.

This isn't to say Seadrill will never see another contract. It's just going to take a long time for the company to recover. It will also need to exorcise some of its debt demons. One thing working in its long-term favor is that its founder, Jon Fredriksen, has a huge stake in the company and will do as much as possible to keep the company afloat. So today could be a big bargain for the stock, but there are some risks here that will take a while to resolve.

A pure play on an oil-price recovery

It's important to realize that BP Prudhoe Bay Royalty Trust isn't the type of company where you typically see things like production and earnings growth. Rather, you are a direct owner of mineral rights in BP's (BP -0.34%) Prudhoe Bay oil field. As such, you're paid a quarterly royalty check based on the selling price from oil at that time, minus the costs BP incurs to pull it from the ground.

So there are two things to consider here. One is that quarterly payments will fluctuate wildly with the price of oil, and you're buying a mature oil field that is in decline. Granted, BP is looking to invest in its Prudhoe Bay field to increase recovery rates, but chances are this will just extend the life of current production rates rather than lead to any further production growth.

What that ultimately boils down to, then, is that an investment in BP Prudhoe Bay Trust is a bet that oil prices are likely to rise from here and that today's current dividend will increase from today's payout that already yields more than 12%. There are reasons to think that oil prices could rise over time, and at today's price that could lead to some decent returns. Keep in mind, though, that it's close to impossible to predict where prices will be in a couple of weeks, months, or even years, so it could just as easily be that oil prices will work against you with this stock.

Righting the ship in a stormy market

It wasn't too long ago that Western Refining was one of the most shorted stocks. The bumbled acquisition of Giant Industries left it straddled with a massive debt load and a bunch of assets that needed to be eventually written down. Since that time, though, the company has really shaped up by trimming its debt levels to a much more manageable level. Its current debt-to-capital level of 34% and net debt-to-EBITDA ratio of 1.17 make it one of the less debt-laden refining companies out there.

One of the reasons it's been able to recover its financial position so well is that it's been one of the better cash-generating refining companies in the industry. Its three refineries -- two in New Mexico and one in Minnesota, thanks to the Northern Tier Energy acquisition -- generate some of the highest gross profit margins per barrel in the industry, and it's been generating returns on equity in excess of 15% for more than five years. 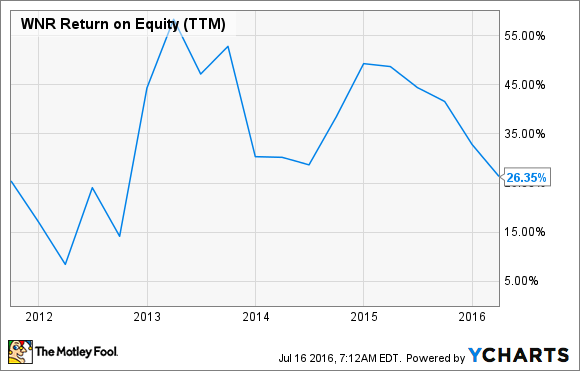 Western Refining's stock has taken a beating of late because refining margins have declined across the industry and have taken a toll on every refining stock, but refining margins are typically something that work themselves out and so don't necessarily mean the company is doomed in the long term. With shares trading at just 5 times earnings, Western Refining looks to be the biggest bargain in the bunch here.