Please ensure Javascript is enabled for purposes of website accessibility
Log In Help Join The Motley Fool
Free Article Join Over 1 Million Premium Members And Get More In-Depth Stock Guidance and Research
By Tyler Crowe – Jul 16, 2016 at 9:35AM

Finding a rock-solid dividend stock with a yield greater than 5% can be like finding a needle in a haystack. Companies with yields that high tend to be on the brink of having that dividend cut, or are in a business that is likely in a long-term decline. There are a few decent stocks among the rest of these investment duds, though. Companies in cyclical sectors like energy have been hit hard by Wall Street and the macroeconomic environment despite being great businesses.

It can be hard to separate a company from the macro conditions in which it operates. When it comes oil refiners like Holly Frontier, it's worth looking beyond the less-than-great refining environment today to examine the company itself. Shares of HollyFrontier have taken a beating in 2016. Oil prices have modestly rebounded from their lows in January, and it has lowered the profit margins of refiners and eaten into profitability a bit. This is especially true in Middle America where most of HollyFrontier's refineries are located. A couple years ago when U.S. oil production was bursting at the seams, those refiners in the middle of the country were paying much less for domestic crude than international imports, but that price difference has pretty much gone away.

Despite this unideal environment, HollyFrontier's management team has proven to be very good at smartly allocating capital and keeping operational costs low. It has pursued many projects to improve refining margins, like sourcing cheaper crude oils like Canadian oil sands and selling to hard-to-access retail markets that typically fetch higher gasoline prices. This has allowed the company to buy cheaper-than-benchmark-price crude and maintain stronger margins than many of its peers. Also, the company has a very conservative balance sheet that shows management is disciplined in pursuing these small projects that have helped it produce some of the best returns on invested capital in the refining business over the past five years.

Refining margins will fluctuate over time just like crude oil prices, but great companies can find ways to generate modest profits no matter the operating environment. HollyFrontier has shown it is one of those companies, and today's 5.8% dividend yield makes the company look awfully appealing as an investment.

For some reason, Total is rarely mentioned when people talk about big oil companies like ExxonMobil or Chevron. It's a shame, though, because the company is proving to be one of the best operators among the large integrated oil and gas companies. What makes Total even more appealing than its bigger big oil brethren, though, is that its stock is yielding an impressive 5.8%.

One of the things that makes Total compelling today is the company has been very good at allocating its capital recently. Many of its largest development projects were completed in 2015. This led to a large jump in overall production, but it also meant the company could lower its capital expenditures right as oil prices declined. Bringing on all of these new projects -- plus some other efforts like revamping its refining and chemical manufacturing segment -- meant that the company's net income only dropped 18% in 2015 while the rest of its big oil peers saw declines of more than 40%. Also, despite the much lower capital spending program in place, it still expects to increase oil and gas production by 4% or more annually until 2019.

Despite these promising signs, shares of Total have been hammered pretty hard by some things that are out of its control (oil prices) or may not have any impact on its results (Brexit). If you can look beyond these, there are a lot of promising signs for Total that make its modest stock price and generous dividend yield look very compelling.

As solid as a high-yield investment can get

Typically companies with such high yields can make for some pretty volatile investments. Their profitability fluctuates, and it can make those dividend payments look like less than a sure thing. One of the few companies that bucks that trend is Enterprise Products Partners. The combination of a solid business model and a disciplined management team have led to a stock that has been a reliable income investment -- and one that has easily beat the S&P 500 on a total return basis over the long term, to boot. 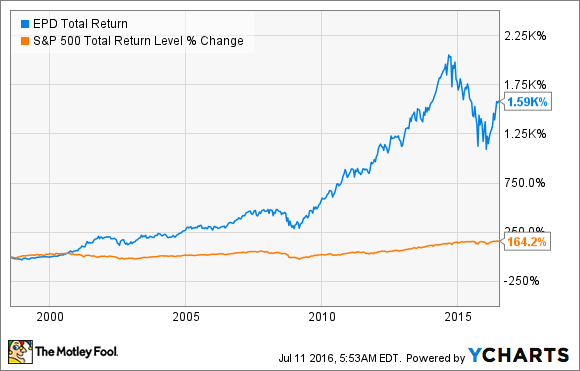 From a business model perspective, the company has built a massive network of oil and natural gas pipelines, processing facilities, export terminals, and storage tanks that allow it to generate profits in just about every commodity price environment. Even though oil and gas prices have been down for about two years now, Enterprise has been able to grow its EBITDA and cash flow to help keep its streak of 48 consecutive payout increases alive and well.

Then, there is the company's disciplined management team. Unlike many of its oil and gas pipeline peers. Enterprise has focused on modest payouts and generating excess cash that can be reinvested in the business. That may sound like something every company should do, but most oil and gas pipeline companies rely exclusively on raising capital through debt and issuing shares. This more conservative approach has kept Enterprise out of trouble and not at risk of cutting its payout like others in the industry are facing today.

Some investors have a fear of master limited partnerships because of the mismanagement at other companies, and that is what has pushed Enterprise's yield to a tempting 5.5%. Unlike its cavalier peers, though, Enterprise has a great track record of keeping long-term shareholders' interests at heart.