Las Vegas Sands stock pays a massive dividend yield of 6.3%, and demand seems to be improving in the very important Macau market. 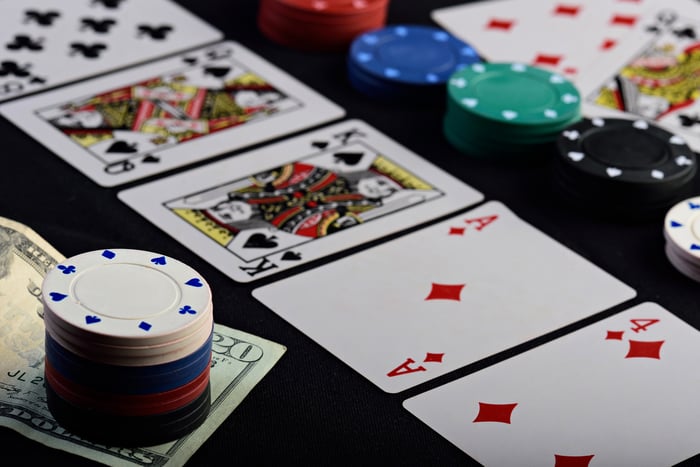 Las Vegas Sands (LVS 2.50%) is facing difficulties due to weak gaming demand in Macau, a key market for the company. On the other hand, the stock is trading at a bargain, with a dividend yield of 6.3%, and there are reasons to believe demand in Macau could be turning around in the middle term. Is now the right time to buy Las Vegas Sands stock? Let's take a look.

Las Vegas Sands makes nearly 49% of its profits from Macau, while 37% comes from Singapore, and the remaining 14% is made in the U.S. This means that what happens in Macau can have a considerable impact on the company's overall financial performance, and gaming demand in this market has been moving in the wrong direction since mid-2014.

The economy in China is slowing down and government authorities have imposed a series of restrictions on VIP gamblers in Macau to combat illegal money laundering through casinos. This is hurting revenue at casinos in the region. According to official statistics, Macau gross revenue from games of fortune decreased by 11% in the first half of 2016.

Las Vegas Sands reported a 9.8% decline in revenue during the first quarter of 2016, to $2.72 billion. The company is keeping costs under control, so hold-normalized property EBITDA increased 0.9%, to $1.03 billion, thanks to expanding profit margins during the period. It's good to see that management is running a tight ship, and successfully sailing through the stormy weather; however, declining revenue is a major uncertainty factor to consider when analyzing a position in Las Vegas Sands stock.

Financial reports from competitors such as Wynn Resorts (WYNN 1.73%) and MGM (MGM 1.74%) confirm that other industry players are facing similar difficulties in Macau, so the decline in revenue is an industrywide problem as opposed to a company-specific one. Wynn Resorts reported $997.7 million in revenue during the first quarter of 2016. This represents an 8.5% decline compared to $1.09 billion in the first quarter of 2015.

Sales in Las Vegas increased by 0.7% year over year, but overall revenue was dragged down by a 13% decline in Macau. Even worse, Wynn Resorts registered a contraction of 14% in operating income during the quarter.

MGM has less exposure to Macau than Las Vegas Sands or Wynn Resorts, so company-level performance is not being hurt by hurdles in Macau to the same degree. Nevertheless, MGM is underperforming its peers in Macau: MGM China announced a 26% contraction in revenue during the first quarter of 2016, while adjusted EBITDA declined 23% versus the same quarter last year.

Short-term uncertainty can often be a source of opportunity for long-term investors, and this seems to be the case nowadays when it comes to Las Vegas Sands. To begin with, the stock is paying a steaming-hot dividend yield of 6.3% at current prices. As a reference, the average company in the S&P 500 pays a much-more modest dividend yield of 2.4%.

The company has delivered impressive dividend growth over the last several years. Cash distributions from Las Vegas Sands have increased at an average annual rate of 30.3% per year from 2012 to 2016. In a sign of confidence, management raised dividends by 10.8% last year, so the company is clearly committed to paying growing dividends to investors through good and bad times.

Even better, there are reasons to believe the worst may be over for Las Vegas Sands in Macau. When looking at profit contribution in this segment, nearly 50% comes from the mass-gaming market. The VIP gaming segment accounts for a much smaller 11%, while mall, hotel, slots, and other businesses generate the rest of the profits in Macau.

According to CEO Sheldon Adelson, Las Vegas Sands benefited from a sequential increase in Macau mass-gaming revenue during the first quarter of 2016, something the company has not seen since the first quarter in 2014. The company's portfolio-wide mass revenue per day was up by 5% sequentially in spite of increasing competition during the quarter.

It's too early to say that Las Vegas Sands is definitively out of the woods at this stage, but maybe the worst is already in the past when it comes to industry conditions in Macau. On a long-term basis, this market should offer attractive potential for growth due to the rise of the Chinese middle class in the years and decades ahead.

When looking at the big picture, Las Vegas Sands is paying a remarkably attractive dividend yield, the company is handling the difficult environment well, and things could be turning for the better in Macau. In terms of risk vs. reward, this leading casino stock looks like a winning play for investors.