Looking for a reliable income investment? Pipeline companies Kinder Morgan and Magellan Midstream Partners are good choices, but which one is the better buy?

Anyone looking at income investing has to consider oil and gas pipeline companies. Their long-term, fixed-fee contracts largely insulate them from the ups and downs of commodity prices, and most of them have some pretty hefty payouts. Two companies that are likely to come across your radar in this industry are Kinder Morgan (KMI -2.48%) and Magellan Midstream Partners (MMP -1.61%). One is by far the leader in terms of size and has huge potential for growth, while the other is a smaller company with a great history of generating returns. So which one is the better buy?

We asked two of our contributors to take a side on the debate to argue why their choice is the better investment. Here's what they had to say.

Matt DiLallo: The weak oil market has brutalized energy-infrastructure giant Kinder Morgan. Concerns about its balance sheet weighed heavily on the stock price, sending it down more than 50% late last year. That said, amid all the turmoil, Kinder Morgan's underlying operations continued to churn out boatloads of cash flow, which is on the rise even as its stock price slumped: 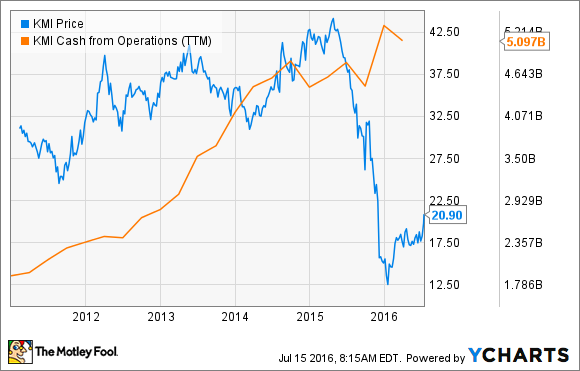 Driving that stability is the fact that 91% of the company's cash flow is locked in by fee-based assets, with 97% supported by fees or hedges. This reliable income stream allowed the company to pivot quickly when market conditions deteriorated, as it cut back dividend payments to fund growth capex and pay down debt.

While the dividend cut wasn't ideal, it got the job done buying time for the company to make the moves it needed to right the ship. Further, it served as a bit of a wake-up call to its management team that it had allowed investment returns to slip, with leverage rising in the name of growth. It's addressed those issues by setting a higher hurdle rate for growth project returns while setting a lower leverage target.

This renewed focus on financial strength sets Kinder Moran up to deliver stronger investment returns over the long term. That's why it has my vote as the better buy right now.

Keeping its head down

Tyler Crowe: No doubt, the growth numbers at Kinder Morgan look impressive, and the moves it has made recently to shore up its balance sheet do make it look more promising than it did before. However, the reason I'm still skeptical of Kinder Morgan is that the company's management put its business in the position that it had to cut its dividend and make all of these debt-trimming moves to begin with. For anyone who owned Kinder Morgan before all of this happened, it wiped out a lot of long-term gains that will take a significant amount of time to recover. Also, if a company's management does something like this once, who's to say it won't do so again?

That's why I'm more partial to Magellan Midstream Partners. The company's business shares a lot of the same traits as Kinder Morgan -- steady cash flows from fee-based contracts -- but Magellan's management has been much more conservative than Kinder Morgan's over the years. It has consistently retained cash flow to reinvest in the business rather than paying close to all of its cash flow to shareholders, it has kept a more modest capital-spending program, its debt levels have been much more manageable, and it has avoided issuing new shares to fund growth.

That may sound like a recipe for a much slower-growing investment, but over time this strategy has proved to outperform both Kinder Morgan and the S&P 500 on a total return basis by a pretty wide margin. 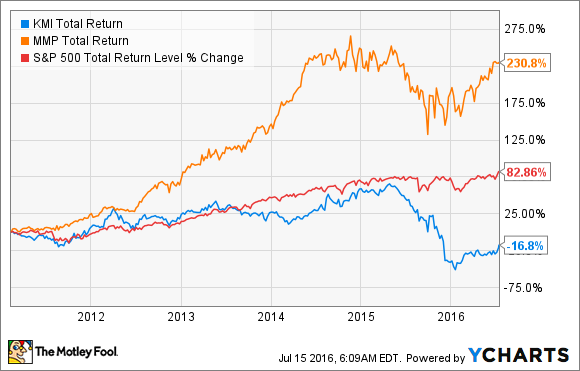 It's possible that Kinder Morgan is on the mend after flying too close to the sun, but it was a hard lesson for management to learn at its shareholders' expense. I would rather stick with the company that forgoes chasing big paydays for slow and steady progress. On top of that, Magellan's current yield of 4.25% looks much more compelling than Kinder Morgan's 2.4%.