Is the 800-pound GPU gorilla a better long-term bet than the aging maker of analog and embedded chips?

Nvidia (NVDA -3.75%) and Texas Instruments (TXN -1.72%) represent two very different ways to invest in the semiconductor industry. Nvidia generates most of its revenue from sales of high-end graphics cards, but it's been diversifying into GPUs for data centers and CPUs for connected cars. Texas Instruments manufactures cheaper analog and embedded chips for mobile devices, consumer electronics, industrial machinery, wireless infrastructure, and connected cars. 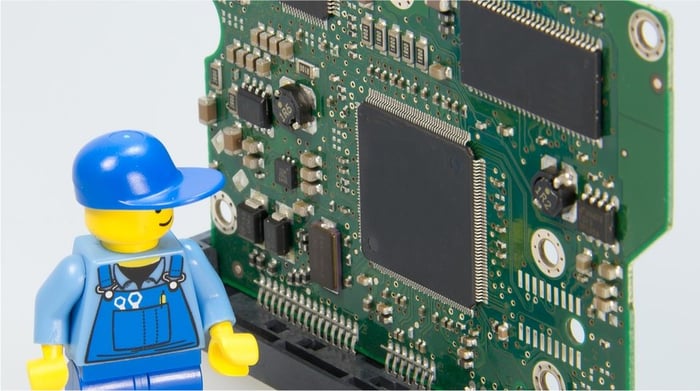 While the two companies aren't direct competitors, they could both benefit from the recent rebound in semiconductor stocks and the rise of connected and driverless cars. Let's examine both companies' core businesses, growth trajectories, and valuations to decide which one is a better buy at current prices.

How do Nvidia and Texas Instruments make money?

Sales of GPUs for data centers, particularly those used for machine learning purposes, surged 63% and accounted for 13% of GPU sale. Sales of Tegra CPUs rose 10% to $160 million, thanks to a 47% jump in revenue from high-end automakers, which install the CPUs in their infotainment and navigation systems. Nvidia's healthy growth across all those categories boosted its total revenue by 13% to $1.3 billion last quarter. Analysts expect Nvidia's revenue to rise 12% this year.

Last quarter, sales of analog chips fell 8% annually to $1.88 billion, but sales of embedded chips rose 8% to $729 million. Revenue from its "other" category, which includes calculators, other devices, and royalties, declined 10% to $400 million. Total sales fell 5% to $3 billion. TI only breaks down its revenue by industry at the end of each fiscal year:

Nvidia is expected to post 45% earnings growth this year followed by 22% growth next year. That forecast justifies its somewhat lofty forward P/E of 34. Over the following year, Nvidia's growth is expected to be fueled by new GPUs like the GTX 1060, 1070, and 1080, which should help it maintain pressure on its underdog rival AMD (AMD -4.55%). Demand for "VR ready" GPUs and interest in its machine learning and driverless car platforms could also drive growth across non-gaming markets.

TI is expected to post 5% earnings growth this year, followed by 10% growth next year. Based on those estimates, its forward P/E of 22 (its highest level since late 2013) seems a tad high. 11% of TI's revenue came from Apple last year, and waning sales of the iPhone could dent its top and bottom line growth. NXP's acquisition of Freescale last year, which made it the biggest automotive chipmaker in the world, could also put pressure on TI's automotive margins with economies of scale.

Some investors consider Nvidia to be a "riskier" play than TI, because its business is less diversified and its valuations are higher. TI is growing slower, but it has a lower valuation, and its forward dividend yield of 2.3% is much higher than Nvidia's yield of 0.9%.

However, Nvidia seems to have more tailwinds (PC gaming, VR, machine learning, connected cars) than TI, which seems to mostly face headwinds in the near future. TI might also need to make a big acquisition to keep pace with NXP's scale in automotive chips. Therefore, I believe that Nvidia is better suited for investors looking for robust long-term growth in a market of slow growing chipmakers.