The stock has endured a gut-wrenching ride for even the strongest of stomachs. Should investors pony up and make a purchase?

After falling nearly 40% from its 2016 high in March, Himax Technologies (HIMX 1.93%) stock has started to mount another familiar and recurring comeback. After cutting through the violent ups and downs of the stock, what does business actually look like for the company? Are shares a good buy? 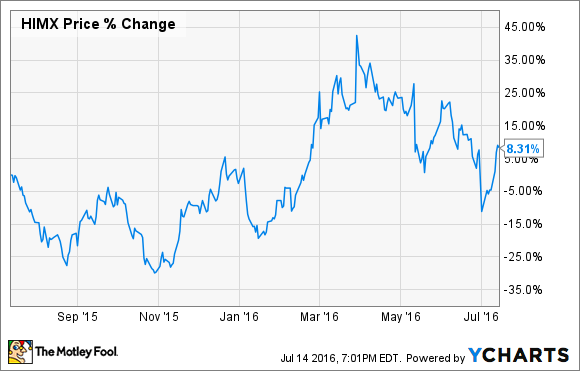 Himax is a semiconductor company based in Taiwan. The company makes and designs components used in display imaging technology for everything from smartphones to television screens. Business is broken down into three segments: large-sized panel drivers, small and mid-sized panel drivers, and non-driver products.

About half of Himax sales come from the small and mid-sized display driver business -- think smartphones and tablets. In the last year, sales of both have deteriorated significantly. With the decline of these markets, makers of these products cut back on orders for the components used to build them, Himax offerings being among them.

During the last year, sales of mobile devices started to slow due to consumers in developing countries delaying upgrades. In general, people are squeezing more life out of their technology before buying new devices. Reasons for the delay range from underwhelming new features to waiting for prices to fall before purchasing. While total shipments of smartphones continue to increase globally, competition in the space has contributed to downward pressure on device costs.

This year will likely not offer a return to previous years' knock-out success. Though new product launches are slated for later in 2016, orders for new shipments are still growing more slowly than in the past. Himax reported another quarter-over-quarter and year-over-year decrease in small-display driver sales for the first quarter of the year. 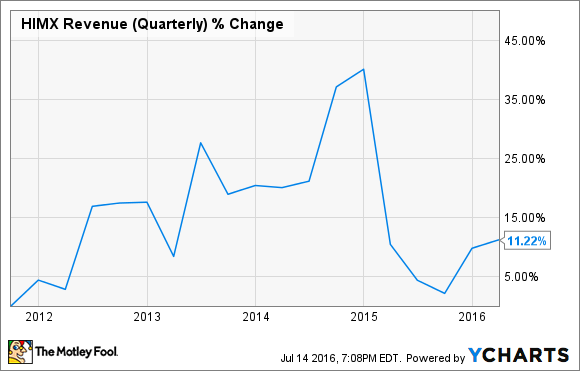 It may be that spending on small mobile devices has reached a pinnacle, and from here on out, growth will be much more subdued than in the last decade. What does that mean for Himax and its business?

While smartphones and tablets have taken their toll on Himax sales in the last year, the company sees a small recovery mounting. It may be short-lived, but orders in the second quarter of the year for smartphone drivers are expected to rebound off their recent bottom. Tablet sales continue to decline, so not much help is expected from that segment.

Two older technologies have also offered a glimmer of hope: the automotive and television industries. An increasing number of new vehicles feature a display, and Himax has benefited from that trend. The company expects sales in that area to continue to grow as the number of vehicles with a screen display and the size of those screens both increase over time. Management expects 30% year-over-year sales growth in the automotive segment during the second quarter.

The development of ultra high-definition televisions has provided a boost as well, with Himax's large-panel driver segment witnessing a 14.1% year-over-year increase in the first quarter. Sales have gotten a boost from TVs for the last few quarters, and the company expects that trend to continue as new models gain traction, and more people upgrade their older screens.

Non-driver growth has also been a big winner. Non-driver products currently consist mostly of components used in augmented and virtual reality gear. At last report, this was still Himax's smallest division, at 19.5% of total sales. That figure is expected to grow, though, with the division forecasting a 20% increase in the second quarter over last year. In addition to virtual reality components, management is also exploring supplier opportunities in Internet of Things products.

Though the company is staging a rebound, Himax is still in a state of transition. With nearly half of sales still coming from its small display driver business, significant risks from slowing or declining sales of smartphones and tablets remain. The company is expecting a rise in revenue in 2016, but it will still fall short of the recent high-water mark reached in 2014.

As revenue makes its comeback, management is also hoping for profits to begin to rebound as well. The bottom line has been squeezed in recent years, down over 60% in 2015, due to the increased staff needed to support the growing virtual reality segment, higher wages, and an increase in research and development costs.

This isn't to say the company isn't seeing success from the increased spending and short-term drop in profit. The automotive, TV, and non-driver segments are on the rise and starting to offset weakness in the maturing small-screen market. While that segment made up about half of sales in 2015, the last reported quarter showed it has dropped to 44.1%. That trend should continue given the strong guidance management has issued in the other areas of the business.

So should investors pile in right now? Analysts expect the company's earnings to grow 22.5% annually over the next five years. That would be a great growth story if Himax can deliver, but much of that growth is currently priced in. The company's PEG ratio, a measure of current stock valuation relative to future growth expectations, currently sits at just over 1.0. A PEG of 1.0 typically indicates fair value, with anything over that threshold considered a premium.

While Himax wades its way through an evolving marketplace, investors should be prepared for continued roller coaster-like stock performance. The shares look poised to continue rebounding in the short-term, but don't be surprised if it decides to take another tumble if business results disappoint. When that happens, have your finger ready on the buy button.