Shares of Omnicom Group (OMC 0.78%) were little changed after the marketing and communications company reported second-quarter 2016 results on Thursday morning. But don't take the market's seeming indifference as a sign that Omnicom's performance wasn't good, as it did continue to grow sales and earnings despite both the ongoing negative effects of foreign currency exchange and an uncertain macroeconomic environment. 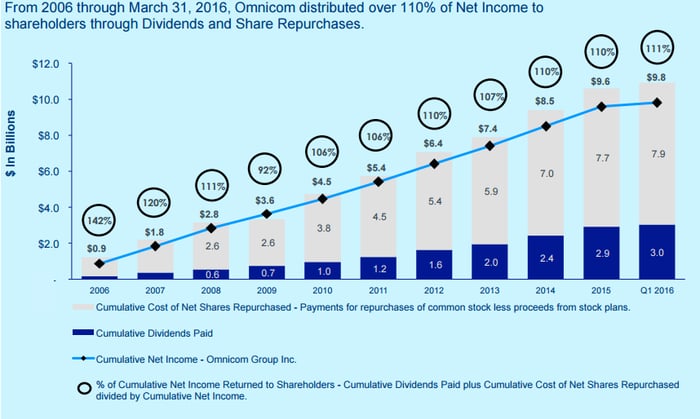 What management had to say
During the subsequent conference call, Omnicom CEO John Wren said that 44% of total revenue came from outside the U.S. He also said that:

Our results were solid during the quarter even in the face of continued currency headwinds. [...] It's too early to fully assess the impact resulting from the ongoing Brexit discussions and upcoming U.S. elections. So far the most significant effect is the continuing weakness of the British pound on our reported revenues. Additionally, when combined with backdrop of recent terrorist related events, clients have become more cautious with the most immediate effect being the cancellation of some customer events, which has had an impact on some of our share and businesses.

Omnicom doesn't typically provide specific financial guidance, but it seems reasonable to anticipate some volatility going forward given Wren's comments on Brexit and the upcoming U.S. elections. Later in the call, Wren also reminded investors that when oil prices fell earlier this year, Omnicom endured similar caution from customers in some Middle Eastern countries, canceling events as a result. With oil seemingly stabilizing, he noted that those markets could be set to rebound in the coming year. Similarly, while Brexit and the like will inevitably slow decision making in many markets, he said, "[W]e expect the volatility and the uncertainty surrounding the Brexit vote to subside and for our agencies to adapt to the post-Brexit marketplace."

In the end, despite seeing another muted reaction to an otherwise decent quarter, Omnicom keeps rewarding investors with its consistent results and sustained ambitious capital returns, all as it continues to successfully navigate the shift from traditional to digital advertising.

Steve Symington has no position in any stocks mentioned. The Motley Fool recommends Omnicom Group. We Fools may not all hold the same opinions, but we all believe that considering a diverse range of insights makes us better investors. The Motley Fool has a disclosure policy.