Please ensure Javascript is enabled for purposes of website accessibility
Log In Help Join The Motley Fool
Free Article Join Over 1 Million Premium Members And Get More In-Depth Stock Guidance and Research
By Palbir Nijjar – Jul 18, 2016 at 9:21AM

Pokemon Go is driving Nintendo stock to levels it hasn't seen in years.

After drifting off into obscurity, Nintendo (NTDOY 0.47%) is once again on the front of investors' minds, as Pokemon Go has captured the hearts of kids and adults around the globe. Since Pokemon Go's release in Australia and the United States on July 6, Nintendo stock has risen 89% in just eight trading days. In that time, Nintendo added $15 billion to its market value. At a market capitalization of $32 billion, Nintendo is now worth a smidge more than Call of Duty creator Activision Blizzard (ATVI -0.51%).

At first glance, it doesn't appear unwarranted that Nintendo has surpassed Activision Blizzard in terms of market capitalization. Both companies achieved $5 billion in revenue over their trailing 12 months. However, that's where the relationship stops. When comparing recent profitability and growth, Nintendo's valuation relative to Activision Blizzard seems a bit out of whack.

So why is Nintendo commanding such a high value? Although Activision's recent past has been much more glorious than Nintendo's, the market is forward-looking. At this time, the market believes the future is going to be much brighter for Nintendo than its recent past. Let's take a look at what investors are envisioning.

According to app-market tracking firm App Annie, Pokemon Go became the fastest game to reach the top of iOS and Android charts in terms of revenue. The game reached the No. 1 position in a single day on Apple's App Store and four days on Google Play.

Nintendo is a major player in Pokemon Go, but its financial benefits from the game are unclear. Niantic, Inc., a software development start-up that began at Google, developed the free-to-play mobile game. Google spun off Niantic in 2015, but not without a $30 million investment from The Pokemon Company, Google, and Nintendo. This is where things get really interesting. The Pokemon Company, which markets and licenses the Pokemon franchise, is also partly owned by Nintendo, as it was established by a joint investment with game companies Creatures and Game Freak.

App Annie has estimated a potential run rate of $1 billion per year. Not only will that be split between the multiple investors in Niantic and The Pokemon Company, but a portion of revenue generated from Pokemon Go will also go to Apple, which takes a cut out of in-app purchases made through its app store. Brad Gibson, an analyst at Macquarie Research, believes that Nintendo's stake in Pokemon Go will be only about 10%.

If the game does hit $1 billion per year in revenue, a 10% stake will result in an annual revenue bump of $100 million, or 2% of its current run rate. This type of growth hardly justifies a 75% jump in the value of Nintendo. However, Nintendo is also launching Pokemon Go Plus, a $35 wristband that notifies gamers when a Pokemon is nearby. Pre-orders are already sold out, and the wristband is starting on eBay (EBAY -1.26%) at over $100. If enough wristbands are developed and sold, Nintendo's stock price will appear much more reasonable.

Pokemon's success may just be the beginning for Nintendo. The potential of leveraging its recent mobile success to popular Nintendo characters such as Donkey Kong, Mario Brothers, and Zelda is leaving investors giddy. Entering aggressively into the mobile market will be a shift in strategy for Nintendo, which has been stubborn about smartphone gaming. In an interview five years ago, former Nintendo CEO Satoru Iwata said the following about developing games for smartphones:

If we did this, Nintendo would cease to be Nintendo. Having a hardware development team in-house is a major strength. It's the duty of management to make use of those strengths. It's probably the correct decision in the sense that the moment we started to release games on smartphones we'd make profits. However, I believe my responsibility is not to short-term profits, but to Nintendo's mid- and long-term competitive strength.

Four years later, in a call with investors, he noted that the company has "no intention to analyze and follow successful examples in the Japanese smart-device market."

Judging by the five-year growth trajectory presented earlier, Nintendo's strategy to stick with its console didn't pan out.

With the cult-like following for Pokemon Go, Nintendo may finally give mobile gaming more credence. The company plans to come out with two more games for the smartphone from the popular Animal Crossing and Fire Emblem franchises. While it's difficult to imagine a scenario where those two games reach the popularity of Pokemon Go, a successful rollout will prove to Nintendo management and investors that it can build a sustainable business in mobile gaming.

The following chart also substantiates why optimistic investors are thrilled with the potential of popular Nintendo characters, especially Mario Brothers. 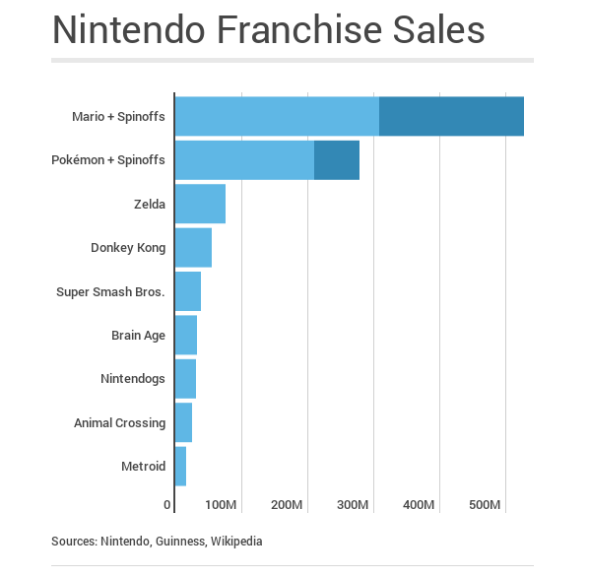 In 2010, Nintendo reached a market capitalization of just under $45 billion. This still pales in comparison with 2007, where the launch of the Nintendo Wii helped the company reach a valuation of $85 billion. With numbers like these, you can see why investors today are excited about Nintendo once again.

However, getting back to its glory days is not a given. And Activision Blizzard is no slouch. On Feb. 23, Activision acquired King Digital Entertainment, maker of Candy Crush and home of 544 million monthly active users. It also owns four of the top 10 games on the latest consoles, including Call of Duty: Black Ops III. Blizzard users were up 23% year over year in its latest quarter. The company also notes that gamers on its platforms spent 42 billion hours over the past 12 months, higher or in line with Netflix (NFLX -0.07%), Facebook (META 0.62%), and all of the major U.S. professional sports leagues combined.

Given Activision's lead in popularity and profitability, it is difficult to justify Nintendo's trading at levels higher than its counterpart. Pokemon Go is great start, but it really has to hit on its next few moves to grow into and even expand its market cap. However, if Nintendo can build on its momentum from Pokemon Go and once again deliver numbers like it did in the past, today's price may even end up being a bargain.

Palbir Nijjar owns shares of Activision Blizzard, Apple, Facebook, and Netflix. The Motley Fool owns shares of and recommends Activision Blizzard, Apple, eBay, Facebook, and Netflix. The Motley Fool has the following options: long January 2018 $90 calls on Apple and short January 2018 $95 calls on Apple. We Fools may not all hold the same opinions, but we all believe that considering a diverse range of insights makes us better investors. The Motley Fool has a disclosure policy.