Please ensure Javascript is enabled for purposes of website accessibility
Log In Help Join The Motley Fool
Free Article Join Over 1 Million Premium Members And Get More In-Depth Stock Guidance and Research
By Cory Renauer - Jul 19, 2016 at 8:22AM

Don't expect any big dividend hikes in the near future from these pharmaceutical stocks.

There was a time pharmaceutical stocks were a dividend investor's friend. Having an exclusive license to sell life-saving drugs made it seem some big pharmas would grow to infinity, along with the distributions.

All five require what most consider an unsustainable percentage of profits to make their current dividend payments. Let's take a closer look at why they might find it difficult to continue raising payouts over the next several years.

With almost $5 billion in sales of over-the-counter goods and specialty pharmaceuticals over the past four quarters, Perrigo Company may be one of the largest pharmas you've never heard of. Its former CEO, Joseph Papa, exited the company on May 3 to head Valeant Pharmaceuticals and left an accounting mess for its new management team to clean up.

Although its external auditor gave the company a clean bill of health up to December 2015, in its latest quarterly report, filed May 16, management admitted its estimated value of assets such as customer relationships, brands, and patents, might not have been accurate. To correct the issue, the company recorded a whopping impairment charge of $467 million in the first quarter. 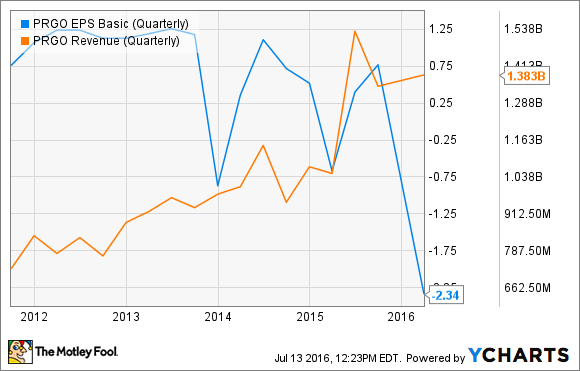 The company does have a 14-year streak of annual dividend raises, but the latest bump of 16% to $0.58 annually is offering a forward yield of just 0.61% at recent prices. If you're expecting more big hikes in the years ahead to raise that yield to an acceptable level, you might be disappointed if this company can't get its impairment charges under control.

In 2010, Bristol-Myers Squibb booked $6.15 billion in sales of its blood clot-fighting blockbuster, Plavix, but it hasn't seen top or bottom line growth since its patent expired in 2012. On the bright side, its immuno-oncology star, Opdivo, has been incredibly successful, with sales on pace to break the $3 billion mark in its second full year post-approval.

However, the recent loss of exclusivity for Abilify will keep Bristol's profits on a tether this year. First-quarter sales of the antipsychotic fell 94% compared with Q1 2015, from $535 million to just $33 million. 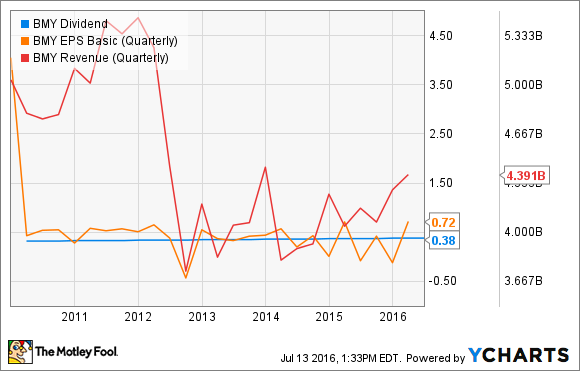 While profit growth has been elusive for Bristol, its dividend has risen slowly but steadily for the past seven years to $1.52 annually, for a yield of about 2% at recent prices. That commitment to shareholders is especially heartwarming when you consider in 2014, and again last year, the company's dividend payments exceeded profits by $369 million and $846 million, respectively.

With trailing-12-month earnings of just $0.93 per share, it might come up short again this year. Even if Opdivo continues soaring, it might be a few years before Bristol can raise its dividend more than a couple of percentage points per year.

Like Bristol, Merck has a star immuno-oncology drug, Keytruda, tasked with keeping an aging product lineup afloat. Keytruda is on pace to reach $1 billion in sales this year, but for a company with over a dozen key drugs losing ground, it's hardly enough. First-quarter sales fell 1.2% compared with Q1 2015, to $9.3 billion.

Last year, Merck's shareholders earned less per share than they did 20 years earlier, but its dividend is a bit higher. It's slowly raised its quarterly distribution five years running to $1.84 on an annualized basis. Despite making tiny increases, payments have exceeded profits in two of the past three years.

Luckily for shareholders, a $14.2 billion sale of its consumer-care business to Bayer in 2014 put some cash in the company's coffers. Merck exited March with about $12.94 billion in cash and short-term investments.

While the cash cushion means Merck isn't necessarily struggling to pay its dividend now, I wouldn't expect any big hikes in the near future. Its trailing-12-month earnings of $1.63 per share are well below the current payout. Even if Keytruda continues its trajectory, it could be years before the company can safely raise its dividend by more than a couple of percentage points at a time.

While it may be able to offset losses to generic competition and return to growth faster than Merck, at present Pfizer's dividend payments require an unsustainable amount of available profits. Last year they exceeded earnings by $0.01 per share, and the recent 7% increase to $1.20 annually is equal to 98% of trailing-12-month earnings.

I think Pfizer is much better off than its big pharma peers and consider its shares relatively cheap. At recent prices, the big pharma stock offers a juicy 3.3% yield, but I wouldn't expect big increases for a few more years at best.

Unlike the first four, Eli Lilly froze its dividend, at $1.96 annually from 2009 through 2014, and increases since have only brought it up to $2.04 per share. While the payout hasn't exceeded profits in recent years, it's currently equal to 94% of trailing-12-month earnings.

If Lilly is going to boost its distribution by more than a couple of percent in the years ahead, it needs some significant growth drivers. The problem is, it doesn't seem to have any, although it should. Its type 2 diabetes pill, Jardiance, that allows excess blood sugar to exit the body through the urinary tract is the first of its class with proof it significantly reduces risk of cardiovascular death. With at least 25 million type 2 diabetics in the U.S. alone, the potential for Jardiance is enormous, but the company reported just $38.2 million in Jardiance-related revenue for the first quarter.

A similar pill, Invokana, from Johnson & Johnson doesn't have the cardiovascular benefit study to boast, but it did earn FDA approval more than a year ahead of Jardiance. Since its launch in 2013 it's taken off, and it finished the first quarter on pace to pass $1.3 billion in sales this year.

At recent prices, Eli Lilly stock is offering a nice 2.6% yield. If it can get Jardiance off the ground, it might be able to raise the payout significantly in the years ahead. But I wouldn't count on it.