The Marcellus Shale, which extends from upstate New York south through much of Pennsylvania and virtually all West Virginia, is believed to hold enough natural gas to meet the entire energy needs of the United States for at least 20 years. Because it is such a vast resource, producers flocked to it to unlock the natural gas trapped within its tight rock formations. That said, while dozens of companies are drilling into the Marcellus, five in particular are dominating thanks to their strong positions in the core of the play.

The Marcellus Formation encompasses about 104,000 square miles throughout the Appalachian region. While geologists have known about the Marcellus for decades, it wasn't on the extraction industry's radar as an exploitable energy resource until the early 2000s. In 2002, the U.S. Geological Survey put out its assessment for the undiscovered oil and gas resources in the Appalachian Basin, calculating that it contained as much as 1.9 trillion cubic feet of natural gas, which is roughly enough gas to meet the entire energy needs of 1.9 million homes for the next 15 years. While that is a lot, it wasn't an earth-shattering number. 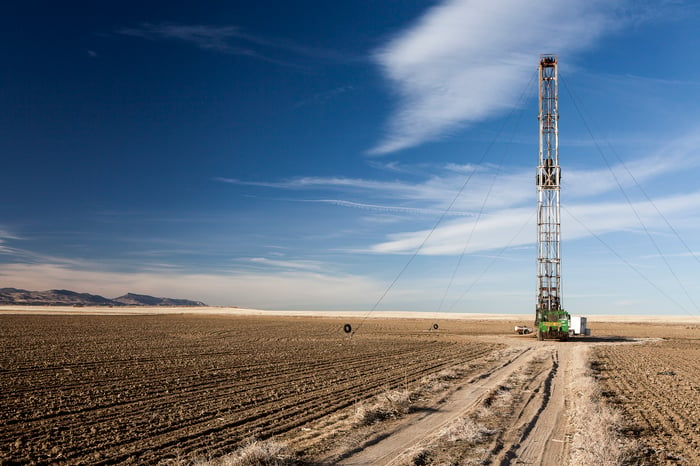 Then, a year later, natural gas driller Range Resources (NYSE:RRC) started experimenting in the Marcellus using a combination of horizontal drilling and hydraulic fracturing after those extraction techniques proved successful in unlocking the gas trapped within Texas' Barnett Shale. Range's first well began producing in 2005, and its early success ignited a drilling boom in Pennsylvania.

As producers unleashed a torrent of natural gas from the Marcellus' tight rocks, it led geoscientists to ratchet up their estimates for the play's potential. According to the U.S. Energy Information Administration's latest assessment, the Marcellus' central corridor contains 143.8 trillion cubic feet of technically recoverable natural gas; other estimates peg that number as high as 480 trillion cubic feet.

The Marcellus' quick rise in prominence has been remarkable. It's now the largest natural gas field in the country, producing a fifth of the nation's output. Driving this stunning ascent, according to research by the Pittsburgh Business Times, are five dominant producers:

It is probably no surprise to see Range Resources at the top of the list, given that it was one of the early leaders in developing the Marcellus. The company's first-mover advantage enabled it to lock up 625,000 net acres in the play, with its position concentrated in the supersaturated southwestern Pennsylvania region. According to Range's gas-in-place analysis, there is more than 300 billion cubic feet of gas per mile locked beneath that region of the state -- twice the amount of gas per mile in other portions of the play. Range's dominant position in the core gives it the resources it needs to defend its spot at the top.

EQT (NYSE:EQT), likewise, holds a concentrated acreage position in the core, consisting of 660,000 net acres. It's a position EQT used to fuel a compound annual production growth rate of 31% since it started developing the Marcellus in 2009. Despite that rapid rise, EQT still has plenty of room for growth: The company estimates that 31 trillion cubic feet of resource potential underlie its position. For perspective, that is more than enough gas to meet all the energy needs of Pennsylvania for more than three decades.

While Rice Energy (NYSE: RICE) has a relatively small acreage position in the Marcellus at 94,000 net acres, it's right within the core of the play. Not only that, but the company boasts the lowest drilling costs per lateral foot. With its edge on costs and its assets' prime location, Rice Energy can drill very economic wells at current prices. That is why it was able to invest the capital needed to drive 53% production growth from its combined Marcellus/Utica position last year.

Big oil giant Chevron (NYSE:CVX) holds a dominant acreage position in the play at 718,000 net acres. Unfortunately, Chevron's extraction costs are not quite as low as its rivals', which forced it to scale back drilling in the Marcellus after prices weakened. However, the company is working to get its costs down, and has the financial capacity to ramp up activities quickly when prices recover.

CONSOL Energy (NYSE:CNX) also halted growth-related drilling in the Marcellus in light of weak prices. Instead, it is focusing on completing recently drilled wells to drive production growth this year. That said, like Chevron, CONSOL Energy has a leading acreage position in the Marcellus that it can use to restart production growth once pricing improves.

Natural gas saturates the Marcellus shale, especially in southwestern Pennsylvania. Because of that, producers that staked out prime positions in that region are currently dominating the larger play. While some have backed down on drilling in light of recently weak prices, their leading positions mean they can quickly unleash a torrent of new supply when natural gas prices improve.