$455 million in new funding shows that SolarCity Corp can still get all of the funding it needs.

One of the biggest challenges SolarCity Corp. (SCTY.DL) has in remaining competitive in the residential solar industry is keeping the flow of money coming into the business. Funding solar systems is not only hard, it's necessary to simply stay in business.

SolarCity also has high goals, attempting to finance over 100% of its installation costs each quarter (what it calls cash flow positive), so financing deals can be a big deal. And one announced earlier this week shows that those coffers are still open.

On Monday, SolarCity announced $345 million in new tax equity financing. That's about enough to fund a quarter's worth of solar systems, assuming that tax equity covers half of the cost of each solar installation. In some ways, this is business as usual, but it also gives SolarCity a few more months of operational funds as the company ponders the Tesla Motors buyout offer.

The other piece of the financing announcement was a $110 million expansion of the aggregation facility to $760 million. This is essentially a place where SolarCity can house solar systems before cash flows are sold off in securitization or cash equity packages.

This brings SolarCity's financing packages in 2016 up to $1.5 billion. That's a lot of funding for a residential solar company, but it's also necessary to keep SolarCity's operations funded. Apparently, banks and other investors haven't been scared off by the uncertainty the Tesla Motors offer brings.

The next challenge will be even bigger

If the first half of the year is any indication, financing isn't a problem for SolarCity. The challenge is finding enough customers to sign solar leases and keeping costs down -- and neither has been going well so far this year. 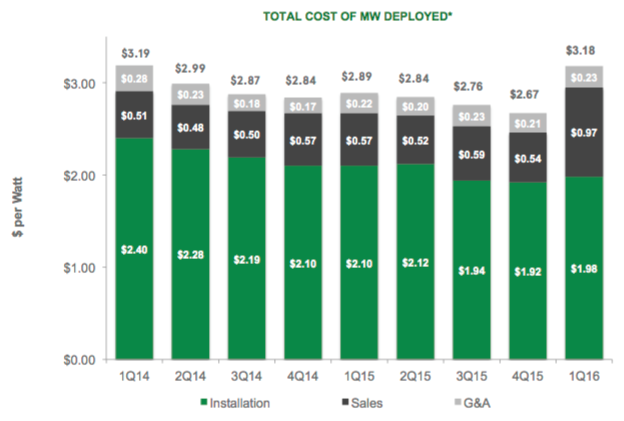 SolarCity hasn't hit its own growth targets, which has made the company spread sales and administrative costs over a smaller base, resulting in the cost rises you see above.

Financing won't be the problem

No matter what happens to SolarCity in the rest of the year, financing doesn't appear to be a problem for the company. Given low interest rates and the desire for green investments, companies are willing to fund solar in larger numbers. That's a tailwind for SolarCity and will help the company amid other operational challenges.

What investors will want to stay focused on is the flow of solar systems going through the business and where costs are trending. It appears to be harder to sell solar today than it is to finance it, which could be a major change in SolarCity's business long term.