Even as Intel attempts to diversify from the market for personal computers, that market will be a key focus of its coming earnings report.

A key part of Intel (INTC -1.41%) has been the company's attempt to diversify its revenue base away from the struggling personal computing market.

However, even as the chipmaker has made steady progress in lessening its dependence on that market, the company and its shareholders can't ignore the fact that last year, its client computing group (which consists primarily of PC chip sales) took in more than $32 billion dollars in revenue -- well over half of its $55.3 billion in consolidated revenue for the year.

This means that the health of the personal computing market, for a good long while yet, will continue to have a meaningful impact on the company's financial results and, ultimately, stock price. In my view, the health of the PC market will be in focus when the company reports earnings on Wednesday, July 20.

PC market seems to be doing better than expected

Last quarter, Intel revised its estimates for how the PC market would do for the year. Rather than a mid-single digit unit decline, the company told investors it expects a high-single digit decline. At the time, management said that this projection was "more cautious than third-party estimates," clearly implying some conservatism.

To some extent, it would appear that investors have baked in some upside goodness to the PC market as the stock now trades just shy of its 52-week high as of writing. 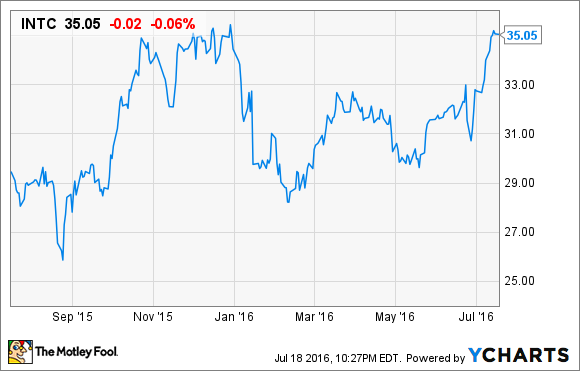 What to watch for when the company reports earnings?

I think that an upward revision due to better-than-expected PC sales would, in the absence of any surprise bad news in the company's other key business segment (data center group), lead to a rally in the shares.

Speaking of the company's data center group, this is also a segment that investors should keep an eye on. In terms of revenue contribution, it's not as large as the PC market (last year, Intel's revenue from this segment came in at around $16 billion), but it's a growth business. It's also a very high operating margin business, so its importance to the bottom line is actually greater than its importance to the top line.

This is a segment in which Intel has forecasted a 15% long-term revenue compounded annual growth rate, or CAGR. However, the company's actual revenue growth in this segment has more often than not missed the mark over the last several years.

Last quarter, this segment grew just 9% year-over-year. On the last earnings call, management reaffirmed its goal to grow this business at a "double-digit [percentage]" clip, so it'll be interesting to see if the company holds to that forecast.